What Fighter can do at 9.5 months

So how was it?

By the time we got to Vegas I was dying wtf.  I asked Fatty if we could cancel the Vegas leg of the trip but we already paid wtf so we’d be burning flights and hotel and have to book a new flight back some more.  So okay……… I tahan. *meditational pose

By the time we went home I was going nuts.  The sucky thing was our flight arriving back in KL only arrived at 12 am!  Which meant that Fighter would be asleep already and we wouldn’t be able to see him until the next morning. But what to do!

Anyway we got home and checked on a sleeping Fighter.  To our surprise he woke up there and then for his midnight feed though it was 1am.  (guess he slept through midnight for once)

I happily took him into our room to breastfeed him, all eager to renew our breastfeeding bond wtf.

He wriggled.  The entire time.

Totally didn’t wanna suckle at all! D: He kept twisting out of my grasp and looking blearily around the room.  Fatty was standing around the room and he kept looking at Fatty but without recognition.

I gave up trying to nurse him and just got him a bottle of formula.  He started drinking but in a very sien manner, as though very sleepy wtf.

I whipped away the bottle and fasterly put him on my boobs again.  Maybe the formula whetted his appetite.  It worked!  He automatically started sucking again.  I was worried he’d forgotten how to nurse but looks like he was just lazy. >.>

The next day, everything was back to normal and he was happy as usual to see us.  Happier than normal?  Not really.  I doubt he even noticed we were gone. -_-

Even then, he’s grown a lot in just two weeks! Less than that actually, we were gone twelve days including traveling time.  Whatever it is, we came home to a nearly brand new baby. Lol.

1. He can hold his own bottle!

Before we departed, he could already tentatively do it.  But because I guess our Tommee Tippee bottle (which he loves) is a little big and awkward for tiny hands, he never did it consistently or stable-y.  Maybe he’d bossily attempt to hold my hand while I held his bottle, or grasp the bottle for a few seconds before dropping it.

And Fighter proceeded to hold it and drink from it steadily until he was all done.

Even more impressive, the next time I gave him the bottle, he held it and drank himself unconscious.  Then when he was done, he just let it slip out of his grasp, flipped over, and went to sleep.

(And that’s how he goes to sleep now.  No patting or rocking necessary.)

WHEN DID MY BABY TURN INTO A BIG BOTTLE HOLDING EXPERT?

2. He can hold his own finger foods!

Found this out totally by chance.In the same motor skills department, I was super surprised to find that not only can he hold his own bottle, he can also hold his own snacks and eat by himself! 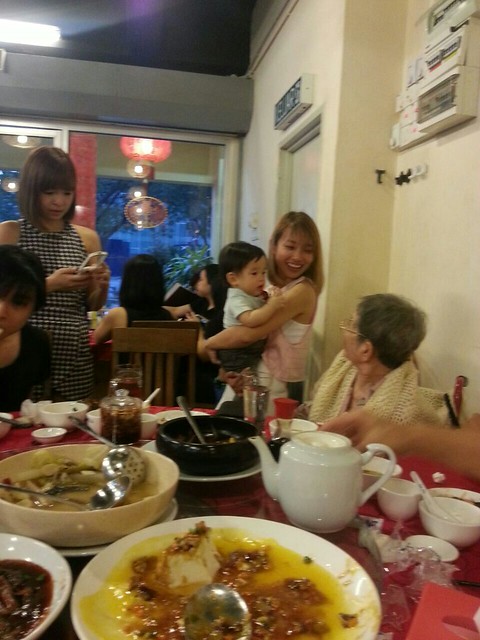 We were having a family dinner and I was talking to my grandma with Fighter in my arms.  Grandma was holding a piece of mantou (a Chinese bun) and Fighter suddenly made a grab for it!

Ah Ma handed him the mantou and to my surprise, he grasped it in his fist and held it up to his mouth.  Then he took a great big bite out of it.

Dude you don’t even have teeth???

I saw he was clamping down on the bread with his gums and ripping pieces off into his mouth. Hahahahah how clever is that?? I actually gave up giving him finger foods weeks ago cos he’d just either drop them without taking a bite, or just hold it in his fist forever.  I guess in that time his motor skills had improved enough, and he now knows what is food and what is to be eaten.

I’m also very thankful that I started giving him solids/semi solids very early on because he just doesn’t like puree.  In the beginning he’d chew/mash the food up with his gums but end up spitting food out but he quickly learned to bite and chew and then swallow food.  If I didn’t he might not have learned so quickly what to do with food pieces. 🙂

He was on a food strike for four horrendous months and I was starting to resign myself to having a terrible eater.  Every day I fretted over what to feed him and mostly resorted to avocado wtf.  Also attempted baby led weaning which was a hit and miss since he didn’t know how to feed himself.

But four weeks ago he started eating a bit more.  I introduced baby pasta or rice in chicken or vege soup of which he’d eat less than a baby bowl.  Also noticed he likes egg tofu so I prepared egg tofu with minced pork and he’d also eat less than an ounce.  But he was eating!

And then right before we left, out of nowhere, he started to eat a whole baby dish of food.  Then sometimes two.

And by the time we came home, he was up to eating three quarters of an adult sized rice bowl!!!!  And he’s eating 3 solid meals a day now.

I don’t know what I did to deserve such good luck but I wish I did so I can do more of that!!!!

Feeding him is now a joy and it’s so fun thinking up new dishes to feed  him!  (Besides the usual boring porridge and baby pasta.)

4. He knows to call people with a yell/gruntDinner menu – shepherd’s pie, chicken version 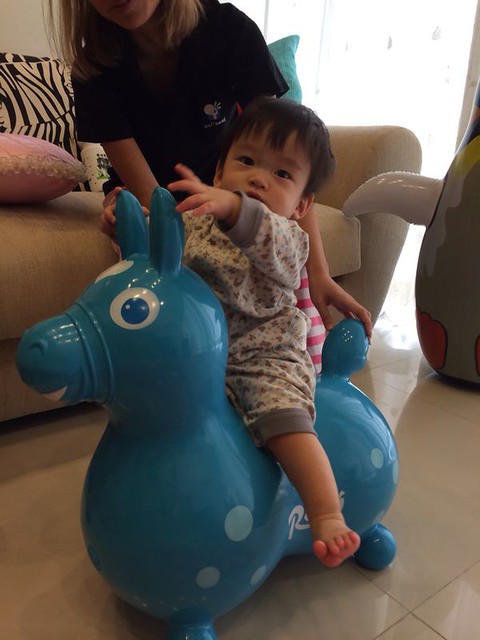 This one’s a tad bossy but he now knows to go NGHGHGHGH and smile at whoever to get their attention. Hahaha.

His legs have gotten strong enough to support himself for maybe like a minute?  This is totally new too; a few days after we got back I got the idea to get him to try standing up by himself.  And he did it!

He’s even picking out his next OOTD here wtf.

Well, when he’s in the mood for love, that is.  I’m not sure if it’s the nanny who taught him or one of our parents.  But when he feels like it and you say “kiss kiss Fighter” he leans in and plants an open mouth kiss on your cheek.

The other day he kissed me and then he moved his mouth like a fish and it was super geli hahahahaha. 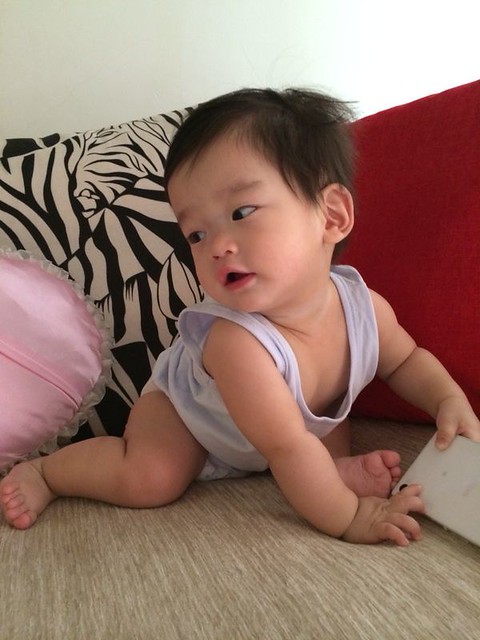 Sadly he’s still on a backward trajectory with this hahaha but everyone says it’s a matter of time before he learns to do it properly.

I can’t believe how quickly he’s progressing lately!  It feels like he learns something new every day.  Him as a newborn was adorable and lovely but this stage is just… FUN. 😀 Can’t wait to see what he does next.