How Fighter inspired the passing of a law

Recently someone alerted me to the passing of a law in a country outside of Malaysia. The law covers harassment in the online sphere – including online sexual harassment, cyberbullying and unlawful stalking.

You know what the interesting thing is?

In the exact word during the passing of the law, here’s what the Minister of Law said:

In another case, cyberbullies targeted the baby of a blogger. The blogger had given birth prematurely because there was a life-threatening condition during the pregnancy. Cyberbullies called her baby an ‘alien’. They said the baby should be euthanised. This was really quite sickening behaviour. It comes from basic bullying instincts of some, unchecked by any notion of civil conduct, and aided by anonymity.

Basically for those who are not in the know, when Fighter was born and was in the NICU, we posted his photos on Instagram because…. well because we loved him.  He was our newborn baby who we’d fought hard to bring into the world safely and he was doing a fantastic job fighting to be healthy and grow. Obviously we were happy and excited and worried at the same time and we wanted to share it with our followers…. and then those two crazies appeared.

They suggested all sorts of things – like Fighter was an ‘alien’, that I was a druggie which is why Fighter was born like that, that Fighter should be ‘euthanized’. -_-  My full blog post on it here.

Anyway there was a pretty big uproar over the behavior those two subhumans, and it even appeared in the Singaporean papers!  Which is I guess why the Singapore government unanimously passed this law.

Quite cool right!!!! I can say Fighter and I contributed to the passing of a real life law in a real country okay hahahaha bucket list checked lol.

I sometimes think that there should be a higher level of accountability when it comes to online identities.

For example, you’re not allowed to register for a social media account or email address unless you can legitimately connect it to your real identity.  Therefore everyone is responsible and liable for what their actions, as is the case in the real world.

Obviously there’s a lot to consider and counter arguments to this as well.  Not gonna go through the ethics and logistical implementation of this right now la, but the truth is, people feel a sort of liberation when it comes to being online.

Is it some evil basic human instinct to wanna do something (online, it’s leaving comments) that will cause someone else pain or trouble?  Does that make people feel good about themselves?  Do you feel superior and happier when someone else is down.

And better still, you don’t have to be accountable! Wanna be Satan and create havoc online? Can ah and you don’t even need to answer for it!

Or is it when you’re hiding behind a keyboard and a screen and you don’t see your victim, it’s much easier to inflict pain?  Take for example an officer sitting behind a computer board.  All he has to do to kill is press a button and somewhere a bomb will detonate.  People die but you don’t see them so it’s like characters in a video game.  I’ve never been in this situation but I’m guessing it’s a whole lot easier than running up to someone on a battlefield and stabbing them with a bayonet, then having to see their dying face and knowing you caused it.

It’s the same when it’s cyber bullying.  You don’t physically see the hurt you cause your victim, so you’re absolved from the guilt and your conscience that would normally govern your behavior.  Just create an anonymous account and nobody will know it’s you and you can still have your good guy image.

Like those two horrible fellas who cyber bullied us.  I really cannot imagine anyone saying the things they did to another person, face to face.  Yet they clearly felt okay typing all this on Instagram.

MCMC (Malaysian Communications and Multimedia Commission) is actually running an awareness campaign about responsibility while being on the Internet – “Klik dengan bijak” and asked if I would share my story which is what got me writing this.

The Internet is the biggest part of our lives now (Captain Obvious) so I’m sure everyone has had some sort of encounter with cyber bullying and other irresponsible actions and has felt it.  It can be as small and petty as a comment saying “Ugly eyebrows” or something as serious as asking me to put my baby to ‘sleep’. -_-

Besides laws and fear of punishment, the only thing that’s keeping humans from doing the wrong thing is our conscience.  Without a conscience (and maybe intellectual thought), we’re no better than animals.

So click wisely.  Think before you leave a nasty comment – would you say this to the person next to you? How would you feel if someone said that to you? What are you hoping to achieve? 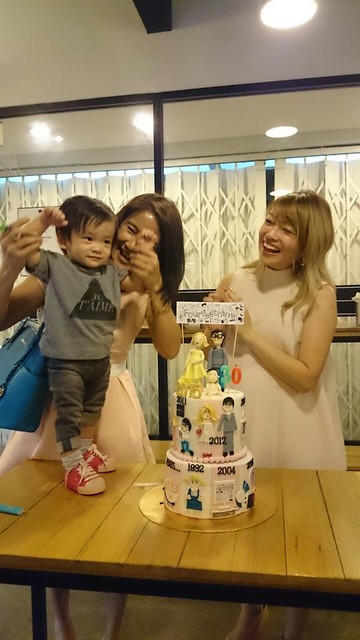 And to spite those haters, here’s Fighter now at 18 months.  Thriving and handsome yo!  And his theme song is Gloria Gaynor “I Will Survive” hahaha.