This year I decided not to throw him a party because… next year onwards he’ll be begging for birthday parties every year.  So this year is a gap year hahahaha.  He doesn’t really have any friends to invite yet, the people he loves the most are just us, and his grandparents.  Plus according to him, the best part of a birthday is the birthday song and blowing candles which can be done anywhere.

So this year we just celebrated at home with family.  I wasn’t kidding when I said his favorite bit is the birthday song with candles and cake so we did that a few times wtf.  (for months leading up to his birthday he already kept asking us to sing him the song and he’d clap and then pretend to blow candles WTF can say he got a lot of practice already lo hahaahah) 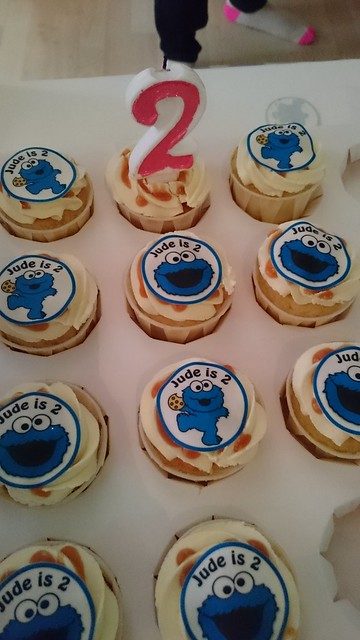 Ordered cupcakes to bring to school so he could celebrate with his little classmates!  Got these from DKBakes (@DKbakes89 on Instagram).  Chose three flavors – salted caramel, red velvet and Milo.  Also picked a Cookie Monster and Elmo theme cos he loves these two characters (also Hello Kitty wtf). 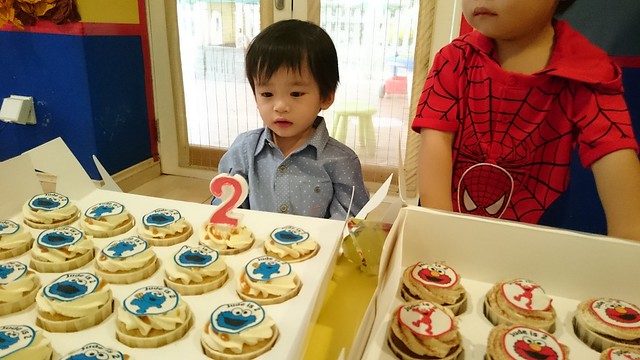 Super blur dunno what to do with it lidat hahahaha.  At home he’s damn enthusiastic about it but suddenly turned shy in school when everyone was singing for him. 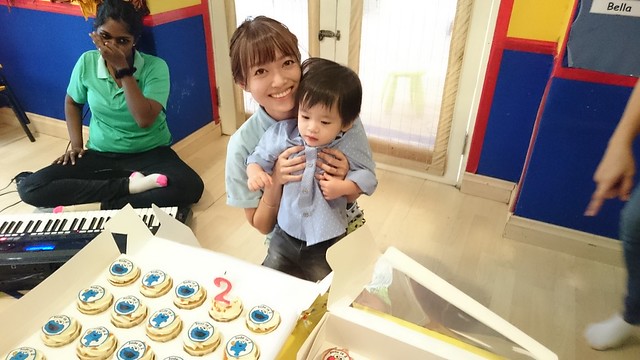 Asked him to blow the candle but his breath wasn’t really reaching it.  So I picked him up to get nearer to blow.  Still couldn’t extinguish the flame and complained, “hot hot” hahahaha so end up I had to blow the candle for him. -_- 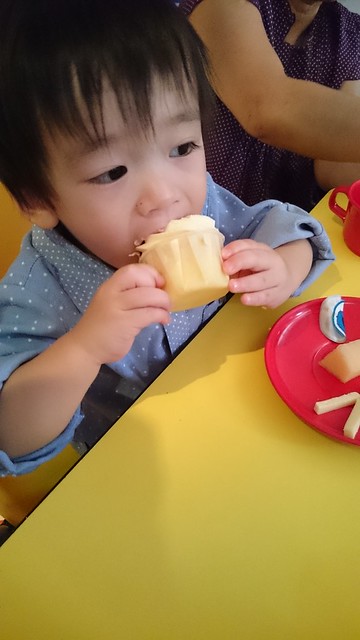 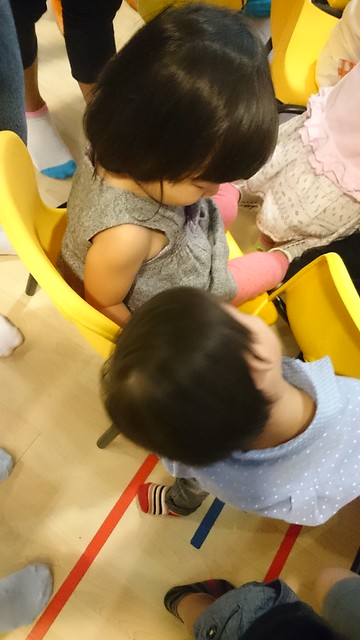 Also had another school romance WTF.  Suddenly super hiao that day… when teacher was showing how to do the artwork that day, he went and put his head on this little girl’s shoulder and lap WTF. 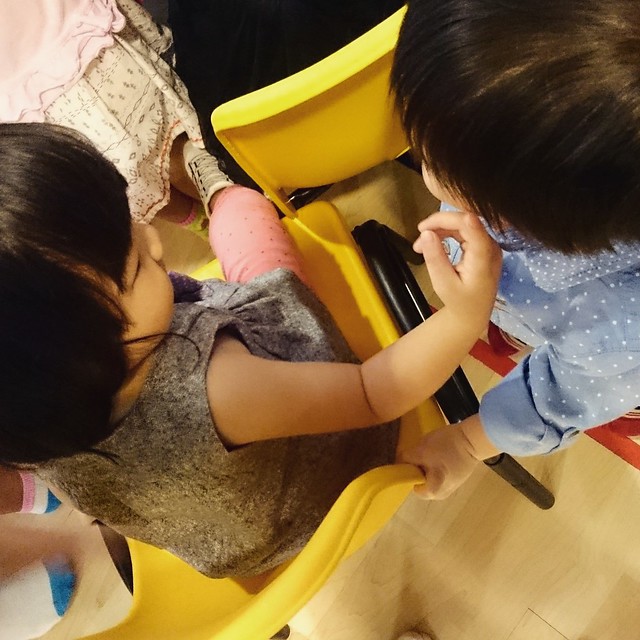 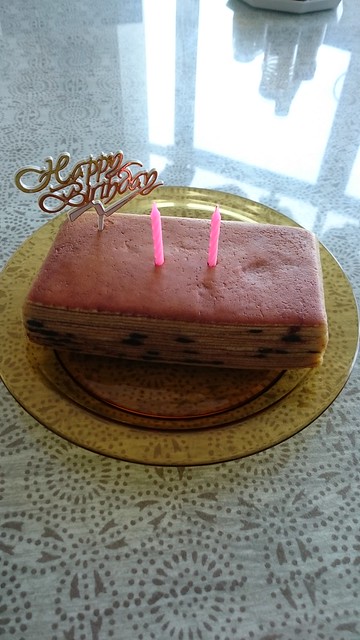 We were in Penang last week so we decided to celebrate again with his grandparents.  Grandma Tiah went out and got him this layer cake.  Hahahaha looks like super no effort put in, but Fighter will never finish the cake anyway, and this layer cake is supposedly very good! 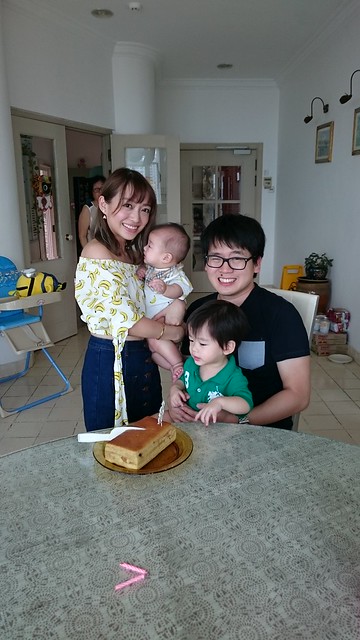 Family photo! With no kids looking at the camera what’s new. 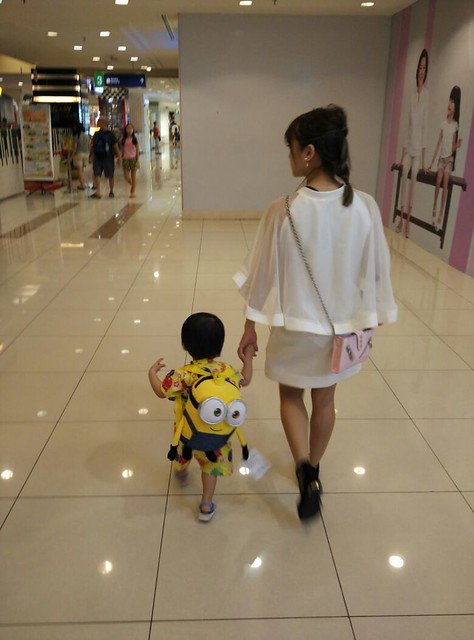 Also took him out for a stroll in the mall.  He fell in love with this minion backpack when we were in Toysrus so we decided to buy it for him, it being his birthday week and all. 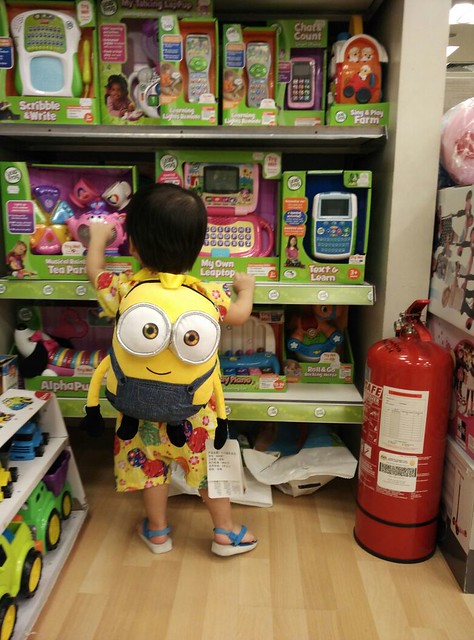 He calls it his nana wtf.  I guess to him, minion = banana. Hahahaha close enough. 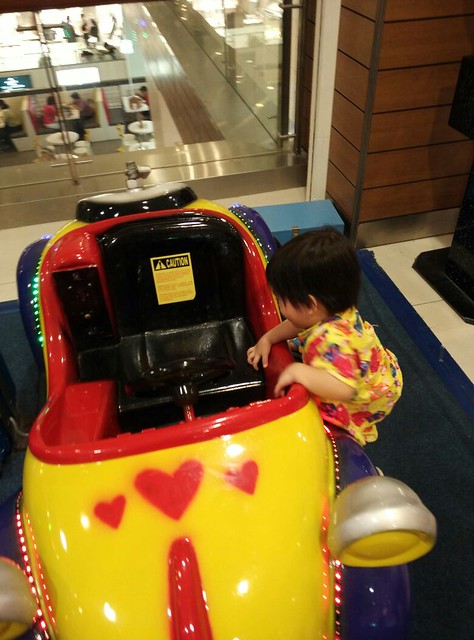 Then he discovered a whole treasure area of these car rides.  He’s obsessed with cars so this was heaven for him.  A very good birthday activity ah!  Some more he’s scared of these when they move and only wants to sit in them when they’re unmoving wtf.  Very good ah, he’s happy and I get to save money lolol. 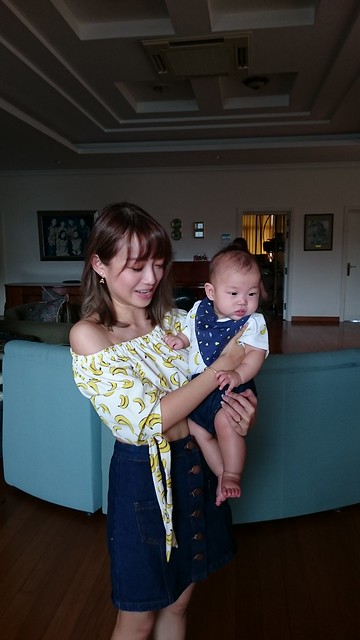 Oh sorry digression but check out me and Penny’s matching outfits!!!  Ok fine I purposely went to hunt for a banana top for Penny hahaha. And she had this denim bloomers which coincidentally matched my denim skirt too. 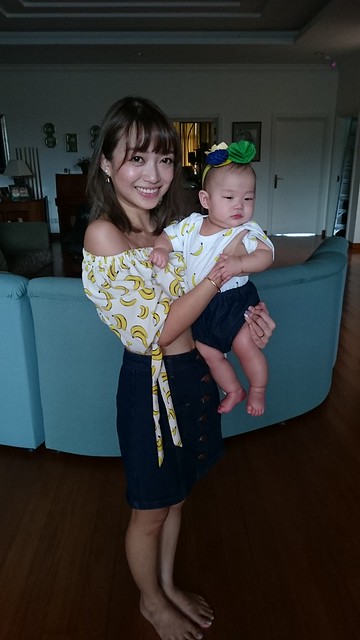 One more picture of this little queen. 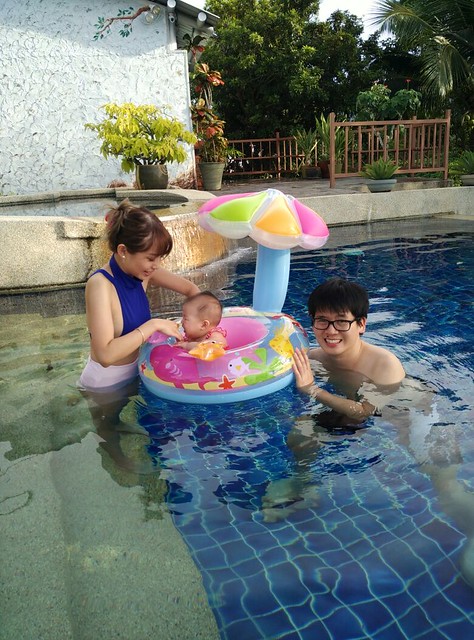 And then we also took them swimming!  Pretty sure Fighter was on cloud 9 – got cars and  cake and swimming all in one day. 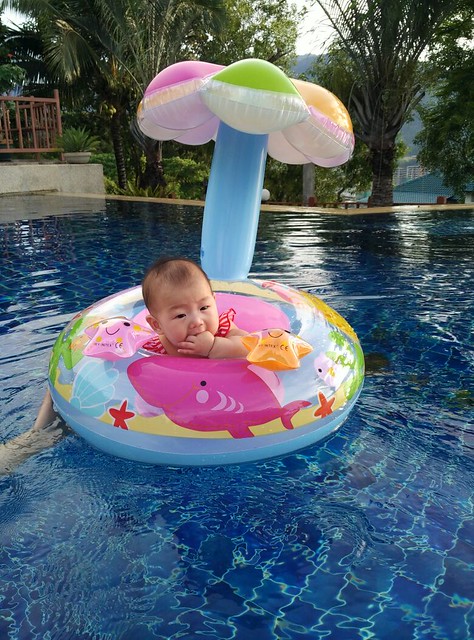 Hahahaha Penny benefits too wtf.  Sorry no photos of birthday boy swimming cos he was with his grandma mostly and we’d like to protect her privacy. 🙂

Then two more times when we got home to KL! 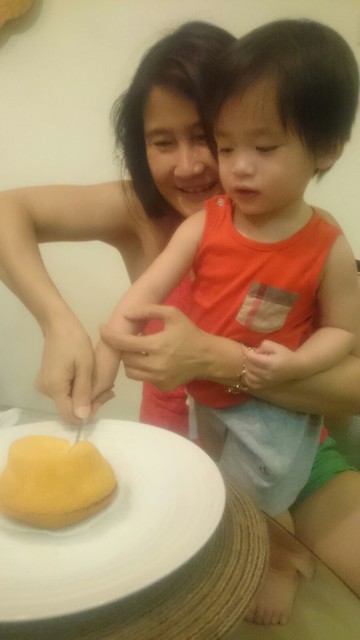 This boy is super lucky or what.  Once with Mummy Ooi and Fat Her who got him a chiffon cake (and two watches for his birthday wtf overkill hahaha.  I told them he’s very into watches lately so they could get a toy one for him for his birthday.  They ended up buying him two wtf he wears one on each wrist now lolol.) 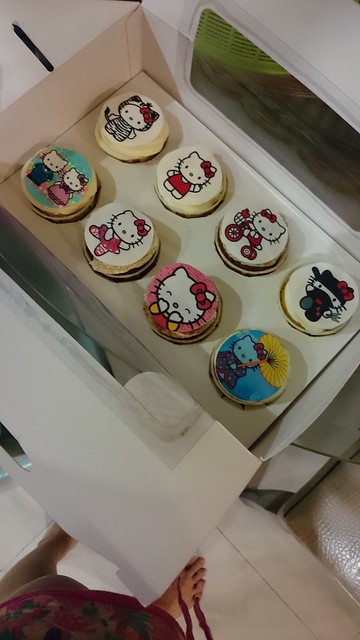 We had leftover cupcakes so we did the whole birthday cake for him AGAIN. 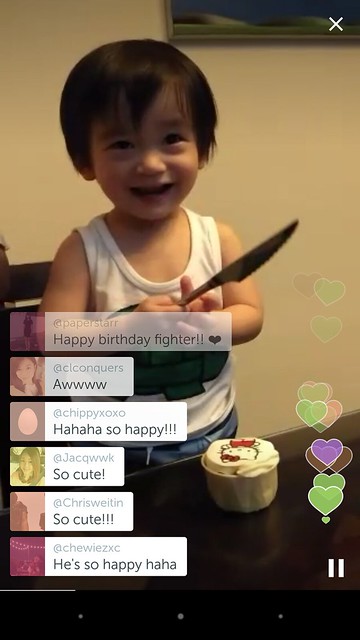 So worth it cos look how happy he is! 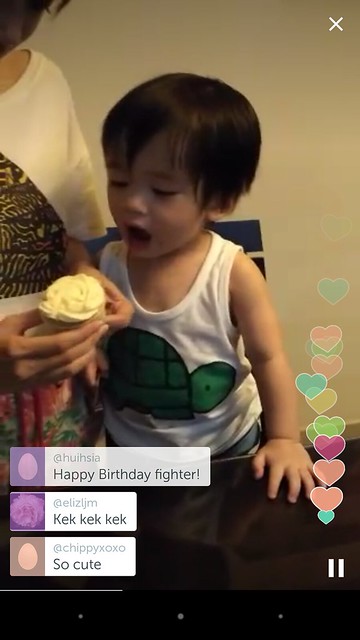 All ready to eat the cake. 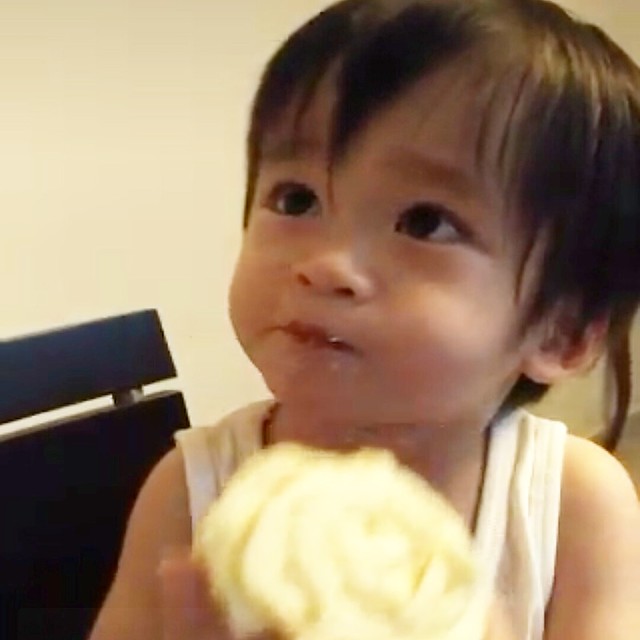 It’s been two whole years since you first entered our lives.  At times time seemed to pass so slow, but now I don’t know where all that time went!  You are a regular little human now, with your own likes and dislikes and a very distinct personality.  Over the past year, mommy and daddy have seen you grow from a blur baby to a walking, talking toddler who is very good at communicating with us, and also parroting us wtf.  We’ve loved discovering new facets of your personality and the fact that you’re such a cheerful, loving child.

You never cease to amaze me with what you’re learning every day.  You and Penny are the best thing that’s ever happened to us.  I love being your mom and having the chance to raise and love you.