BERSIH in the eyes of racists

In the aftermath of Bersih 4, I was surfing Facebook and came across some choice gems of photos.

This Facebook page is named “UMNO New Era” and as everyone knows, UMNO is the leading party in the coalition Barisan Nasional that currently governs Malaysia.

However I doubt UMNO is officially affiliated with this page cos they cannot be so stupid as to post the kind of things these people are doing. 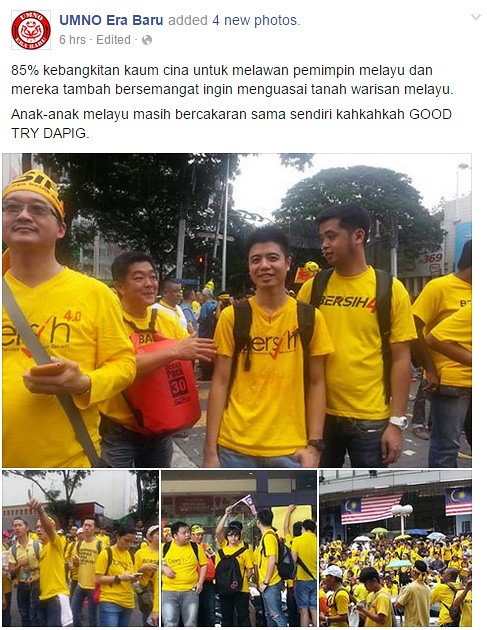 85% of Chinese rise to oppose Malay leaders and they are enthusiastic with intent to control the land that belongs to the Malays. Malays are still fighting (?) among themselves HAHAHA GOOD TRY DAPIG

(DAPIG is their oh-so-witty play on the acronym DAP which stands for Democratic Action Party, a leading opposition party)

Erm. Where did they get the number 85% from? Who said anything about them “rising to oppose Malay leaders?” -_- Or “wanting to control the land?” WTF are they smoking!?

As an ethnic Chinese, I can assure you that we as a race are not interested in “opposing Malay leader” or “wanting to control the land”, as you so eloquently put it. -_-  Stop making everything about race. If this statement is not seditious or incendiary, I don’t know what is. 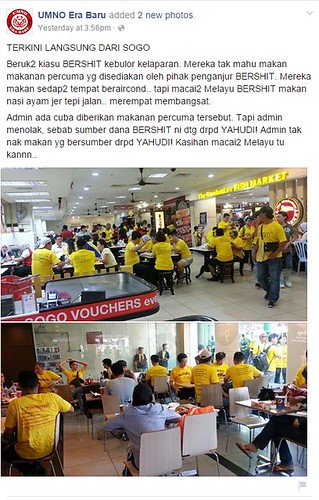 LATEST FROM SOGO.The kiasu monkeys of Bersih are starving. They don’t want to eat the free food prepared by the Bersih organizers. (and then it refers to Bersih as Bershit wtf) They are eating delicious food in an airconditioned place… but the Bershit Malays are eating chicken rice at the side of the street… homeless. (it mentions the word ‘bangsat’ of which meaning I’m not sure but from people’s reactions, it’s a very bad insult.) Admin (I assume they’re referring to themselves) was offered the free food. But admin rejected because the source of donation for Bershit is Jewish. Admin does not want to eat food sourced from Jews! We pity those Malays…

OMG. This caption is so stupid it’s bordering handicapped. They deserve a disabled sticker to stick on their cars.

First of all, so what if Bersih participants prefer to go to a restaurant and eat?? What’s the crime here?

Secondly, what proof do you have that Malays (again bringing up race) are eating by the side of the road? And WTF is wrong with chicken rice? I love chicken rice wtf.  Does eating chicken rice make you homeless? Wow the genius of this all is too much for me.

Thirdly, the tall tales they’re spouting is unbelievable. What proof that Jews have anything to do with Bersih? Again they’re trying to fear monger by implying that Jews are a part of this.  Because the religious, abiding Muslim is supposed to be afraid of Jews? To hate them? Is that what they think?

Fourthly, if UMNO Era Baru doesn’t want to eat food from Jews, then why are they posting this on Facebook? By their logic, Facebook is a Jewish company, owned by Mark Zuckerberg, who’s (culturally, at least?) Jewish although I’ve read he’s an atheist.

Don’t use Google cos Sergei Brin is Jewish.  (Actually pretty sure they’re not googling for anything, considering how stupid they seem.)

Don’t drink Starbucks coffee or buy your kids toys from Toysrus cos they’re Jewish too.

And you better not be updating Facebook from your Dell laptop cos Michael Dell is Jewish too. 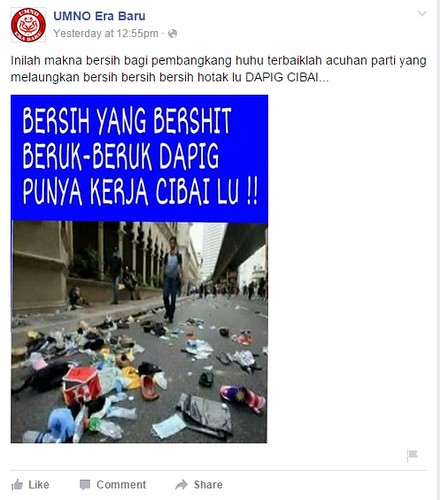 This is the meaning of ‘Bersih” (clean) for the opposition

Sorry after that I didn’t really understand what they mumbled about cos I’m not familiar with a lot of Malay slang.

Nice. Real classy. This photo could be real.  But it could also be faked, taken at another time.  There’s no way to determine the legitimacy of it.

However, there are many other photos depicting that Bersih rally goers were civic conscious and strove to keep the streets clean. 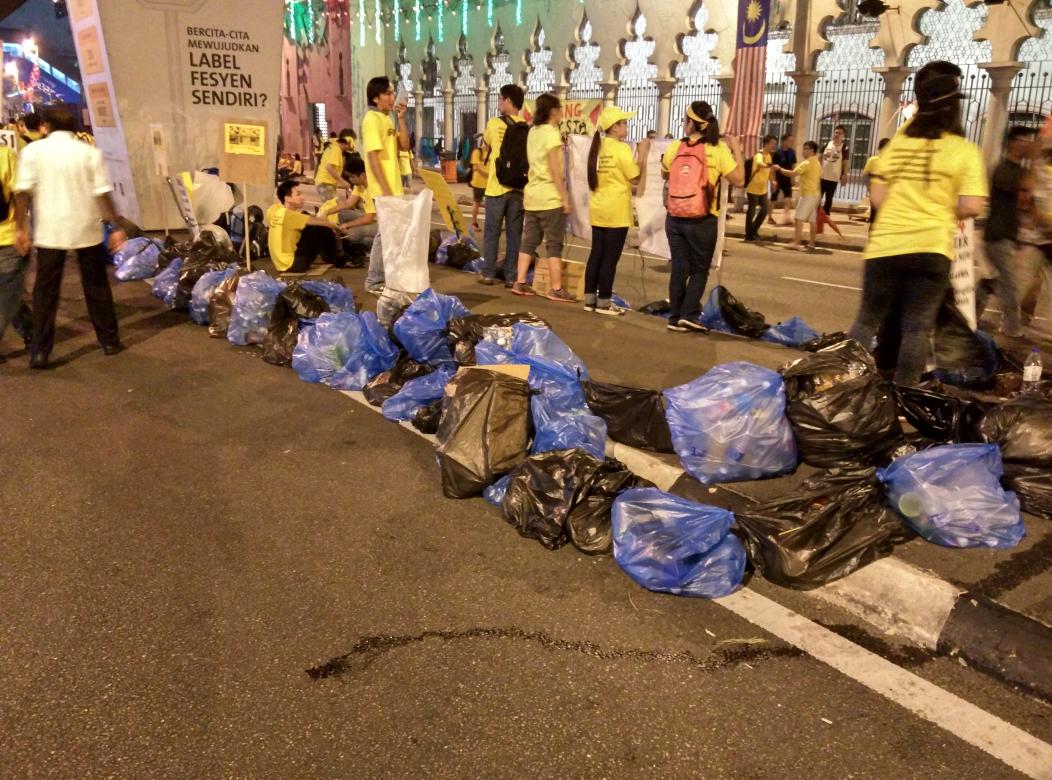 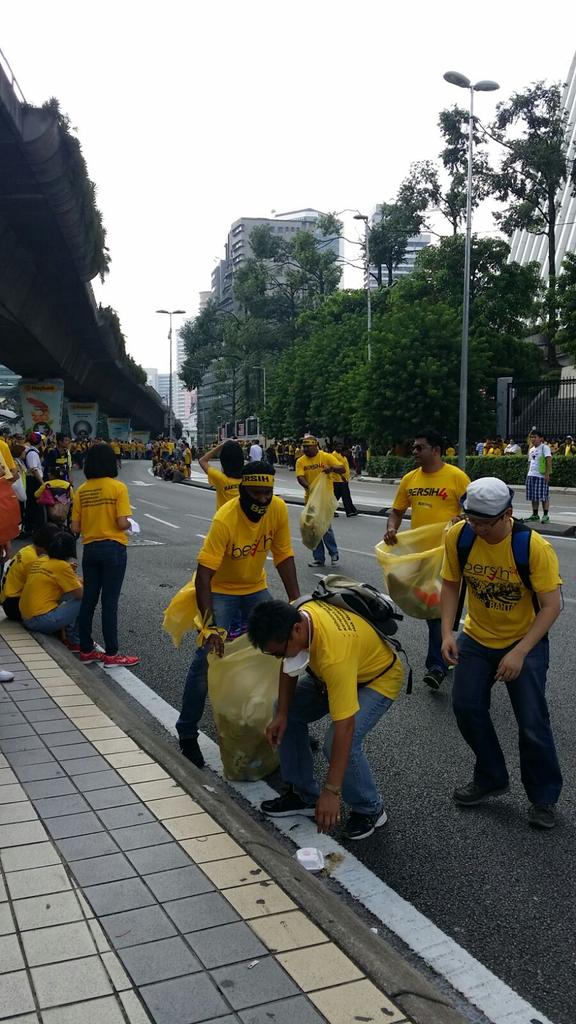 It could be true that some irresponsible participants littered anyway.  Out of thousands of attendees you can’t expect a 100% cleanliness record.  But the post just reeks of anti-Bersih racists desperately trying to paint a bad picture of the rally. 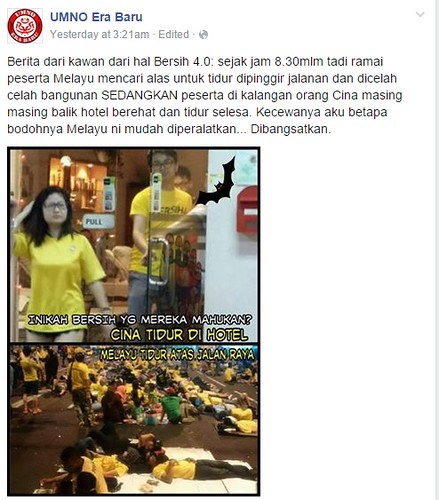 Since 8.30 pm, many Malay participants are searching for something to lie on by the side of the roads and in the crevices of buildings WHILE the Chinese participants return to their hotels to rest comfortably.  I’m so disappointed that how stupid Malays are so easily manipulated.

Seriously after every caption I go WTF. 1, I love how conclusively these idiots dare to say that ALL Chinese stay in hotels while ALL Malays sleep on the road wtf.

You want to talk race? Ok there.  Stole this photo from Suanie.  There’s tons of these circulating. Are these people Malay?

Aiya if the Chinese all slept on the street, these UMNO Era Baru losers would say something like “damn Chinese dirtying the pavements” la.  They’d always have something bad to say.

2, If someone chose to sleep on the street (since it’s an overnight rally) SO WHAT? Their choice la! But no, UMNO EB crazies are accusing manipulation.  Who’s really trying to manipulate who here? UMNO EB? 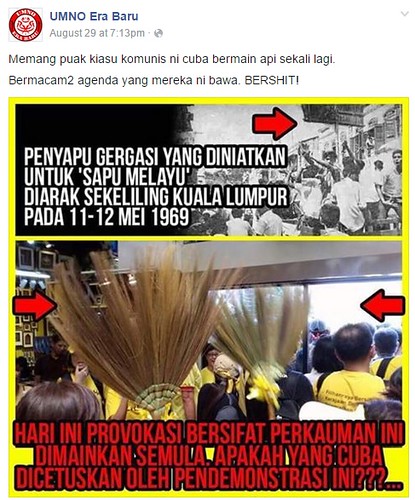 The kiasu communist tribe is trying to play with fire again.  They have all sorts of hidden agendas. Today, this racial provocation is played up again. (in reference to the racial riots of 1969) What is this demonstration trying to incite?

Talk about seditious.  Bersih is a movement for clean elections, governance and anti-corruption.  Which is probably why those people in the photo were holding brooms, to symbolize cleaning. Trust these mofos to compare it to the racial riots of 1969, where people possibly carried brooms as weapons.  I cannot believe how racist and incendiary these crazies are. In fact, the Bersih 4 rally was peaceful and orderly, with no major incidents. Source 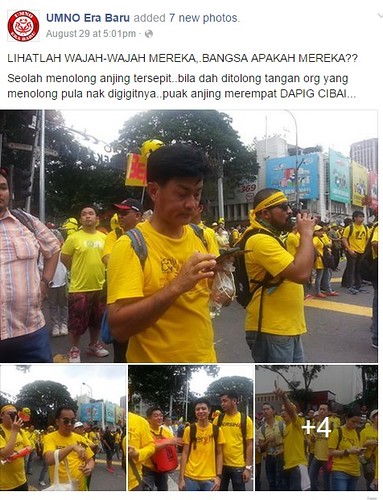 LOOK AT THEIR FACES. WHAT RACE ARE THEY?

Like helping a trapped dog… help them and they bite the hand that feeds them. Tribe of crawling dogs DAPIG pussy

Wow this level of coherence is outstanding.  Somebody give them a Pulitzer already!

Same old same old. Bringing race into it again. I don’t want to get into this can of worms but basically saying the Chinese should be grateful (to who? Your guess is as good as mine) but instead they are not, since they are taking part in this rally.

I decided to take screenshots and post these pictures because I want people – whom I hope are educated, fair and good enough to see the hate and lies and hypocrisy behind these posts – to see. Read and judge for yourself what this FB page is trying to achieve.

Fatty and I have many wonderful friends and colleagues who happen to be Malay.  We get along well and race and religion have never been a problem.  So of course I’d like to think (and I hope I’m right) that this is just a minority.

But it’s crushing to see that there are people out there who are fueled by so much hate as to post such awful things online.  Why? Just because we are an ethnicity and a culture different from you?  Even though we’ve been living together for centuries?

Or is it just for a political agenda?  Is it because the easiest way to unite a people is to nominate a common enemy to vanquish?

That’s how the Holocaust started.

Now, if we could chalk it up to crazy extremist racists just spouting off, it would be more bearable.  But many of our politicians remain silent on this and allow racist talk like this to continue.  Some have even been known to say similar things themselves.

So I spent two days sad and contemplative wtf.  What’s in our future here as non-Malays? Do we have to migrate? I kept thinking, will they only be happy if all non-Malays simply left? Is that what they want?

That’s not what *I* want. This is my home and I love Malaysia! Even despite our problems.  This is where I was born and bred.  And it’s where we started our family. I don’t want to go anywhere else because this is home.  And because this is home, I want to make it a better nation, for myself and for my children.

But I scrolled through that hateful page again and this time I read the comments.

Among the vile replies supporting their disgusting sentiment, I was heartened cos other comments disagreed and scorned their crazed rantings!  We are smarter than they think.

Also saw comments similar to this: 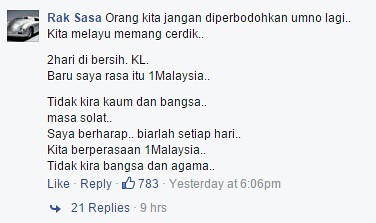 Our people, don’t be played by UMNO anymore.  We Malays are clever.  Two days at BERSIH KL.  That was when I felt we were 1 Malaysia.  To not judge by race, I hope that every day, we are 1 Malaysia, without looking at our race and religion.

At BERSIH, when the crowd sang Negaraku at midnight to usher in our National Day, I had a lump in my throat and tears in my eyes.  I’d grudgingly sang the national anthem as a kid at assembly (cos it wasn’t cool to be patriotic wtf) but I couldn’t be more wrong.

Negaraku is our anthem, and Fighter and Penny deserve to feel the same pride and love singing it.

I only hope they get that chance.