Being a badass in NYC

For years now I thought I’d outgrown my suayness.  So much so that my AudSuay category on my my blog has been neglected lolol.  I attribute it to the fact that besides actual bad luck, most of my suayness comes from me being impulsive, not thinking things through or being just plain careless wtf.  So when motherhood arrived, I think I subconsciously leveled up and became more responsible.

And my suayness dropped!  I thought wah I really grown up already, responsible adult and all.  When I met Angela after having Fighter, I even told her I’m serious now and don’t laugh as much WTF.  I don’t know what delusions I was operating on la cos she met me and told me I’m crazy obviously because I am exactly the same hahahaahha.

Well. I now know the reason why.

When I’m around my kids and Fatty, I’m fully in Mom/Wife mode.

But when I’m by myself… I go to shit wtf.

Ok la not as dramatic as that hahaha but when I’m by myself, I subconsciously let my guard down…. and the stupidity comes back. Hahahaha.

Ok why all this soliloquy?  It’s cos I was pretty amazed by all the stupid incidents that happened New York that normally NEVER happen to me now!

Okay la this one not rooted in stupidity but just shopaholicness wtf.  When I was in college, my favorite hangout place was Target FML.  There wasn’t much to do near Mount Holyoke especially when I didn’t have a car so every week I’d take the shuttle bus to the mall and spend my time in F21 and Target lolol.  Target is awesome man.  Got everything under the sun – for me as a college student, it was dorm stuff, snacks and makeup.

So when we got to NYC I told Sieu Ee that we must go to Target!  I googled for the nearest Target and called for an Uber.

We were staying on the Upper East Side and I vaguely wondered why the ride took quite long.

When we finally got there, we were surprised to find that we were the only two Asians there.  Because everyone else was Black wtf. :X

Upon further googling, I found that we had gone to Harlem HAHAAHHA.  And later on when I met a friend from MHC who’s living in New York now, she told me she didn’t even know there was a Target in NYC WTF.  No wonder when I walked around Manhattan I never came across Target la wtf.

I don’t know if Target is a more suburban thing?  Or that New Yorkers just don’t shop at Target but now I know hahahaha.

And we managed a lot of loot!  Got a lot of nice kids clothes off the sales rack some more at like USD 1-4 each ok damn worth traveling to Harlem hahahaaha.  Good experience, good experience.

Um.  Even now as I’m typing this, I’m having doubts if I should write this.  Cos uh I suspect this may be illegal wtf.

But ok the story is. We were hanging around in Soho one day. By hanging around I mean shopping at Nordstrom Racks wtf.  We were just about to head back to get ready for a dinner with Sieu Ee’s family when it suddenly started pouring.

We’d planned to get an Uber but due to the rain, the jam looked bad from Waze.  And there was a subway entrance right outside Nordstrom.

At this point I hadn’t figured out the subway system yet (last trips I either blindly followed Fatty or blindly followed Angela/Angela’s cousin wtf) and I was the old hand at NYC compared to Sieu Ee. But we had no choice.  It was getting late, the rain didn’t look like it was going to stop, and there was no Uber to be found.

We made a mad dash through the rain to the subway station. Then the weirdest thing.  We hurried down the stairs to the station to find…. No ticketing machines????? WTF Union Square?

There was only a row of turnstiles that everyone was breezing through, and an exit door. How?? We cannot go up into the rain again because rain la duh.  But we cannot stay here forever either.  Sieu Ee stood there stupefied.

So I took action.  The next person who came out the exit door, I darted and held the door open and slipped in myself. :X  I looked for Sieu Ee and she was standing all the way the other side FFS looking blur hahahaha.  I had to shout to her and ask her to come. *adrenalin

She obviously has a lot more brains than me cos she was like, “Cannot! This is the exit!”

And I was like “Can! No choice! Maybe we can go in and find someone or a counter or something so we can buy tickets!”

There must be a way to get tickets, I thought.  There wasn’t wtf.

All the while, Sieu Ee was muttering about being deported or not allowed to come back to the US ever again, whilst looking around for security cameras. Hahahahaha sounds funny now but at that time I was getting quite scared too.

In the end I made the executive decision that we should get on the train because nowhere else to go!  I reasoned if we can’t find an attendant here, maybe we’d find one at the destination. When we got to our station…. no attendant either wtf.  And there were turnstiles.  So I just turned one… and left the building wtf. So that was the day we became criminals wtf.

Errrr NYPD or FBI if you’re googling this, uh please don’t arrest me wtf. I confess! I have your money I am more than willing to pay for my subway ticket!!! I am not a dishonest person!!!!

This is nothing.  Except that when we were walking somewhere near Times Square I didn’t see a homeless man in my path and kicked over his cup of coins. T_______T Shit I felt soooo horrible and of course I helped him to pick everything up.  Considered giving him some money to make up for it but I didn’t have change besides pennies like a bit insulting right FML.  And FHL too wtf luckily he was very okay about it.

Ok now the stories are off my chest, let’s move on to photos!  I just wanted to enjoy NYC this time around without worrying about social media so I didn’t take out my phone and camera that much this time.  So these are all random shots from everywhere. 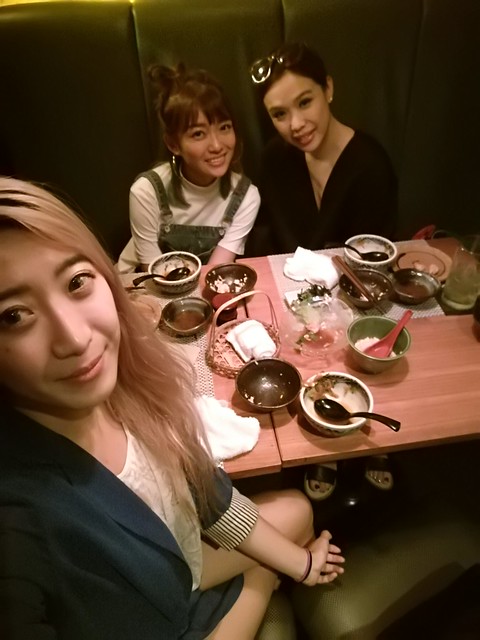 Met up with a friend from Moho, Aileen!  I haven’t seen her ever since graduation and she’s a couple years behind but it was so good to see her again and gossip about everyone else lolol. 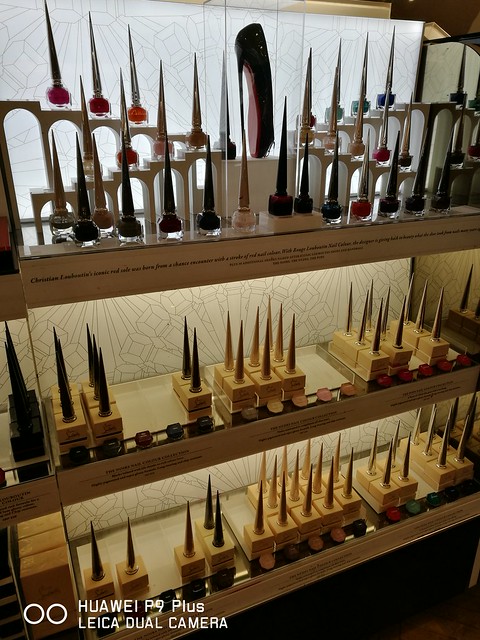 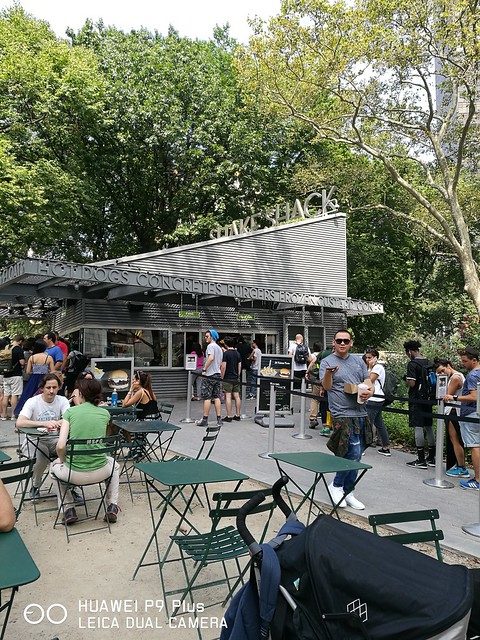 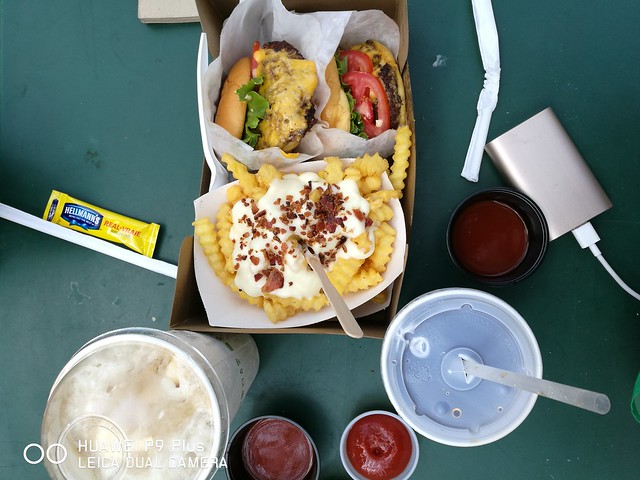 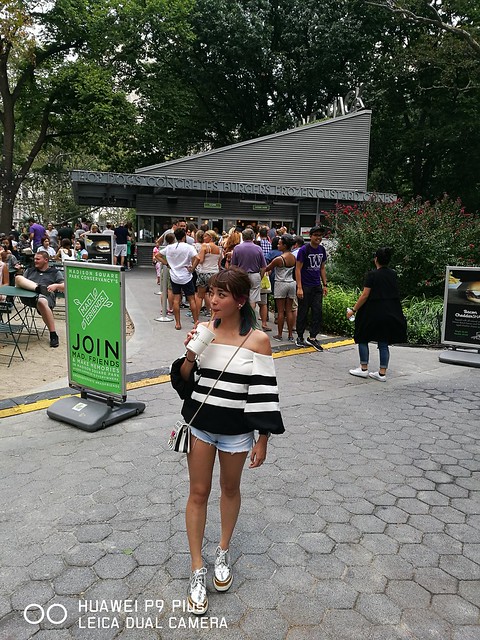 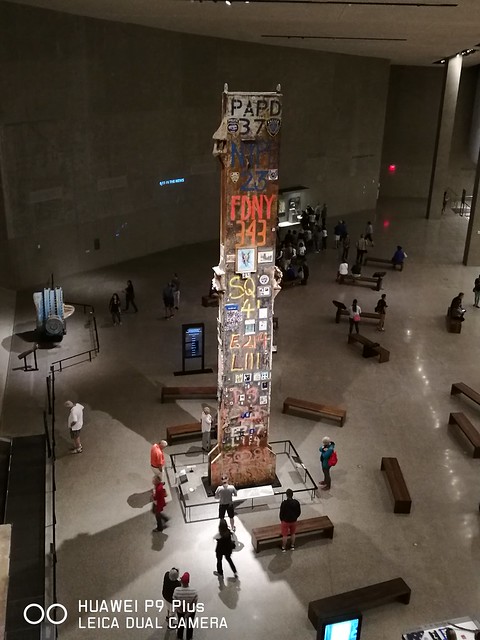 A steel structure that used to be a part of the WTC. 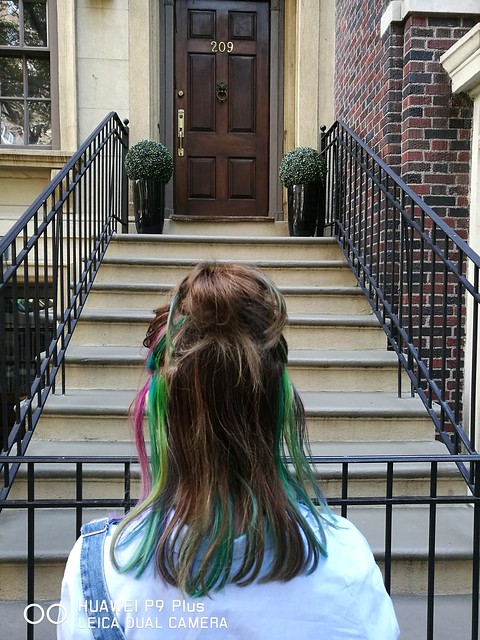 My hair outside someone’s brownstone. Hahahaha. 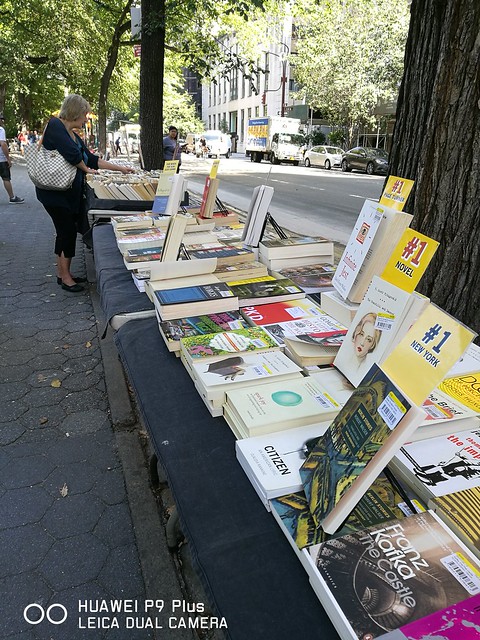 OMG I know these book stalls are all from big stores but I love the abundance of literature in NYC!  Actually in London also la.  I think I said before but I would love to open a bookstore slash cafe here but I don’t think anyone reads enough for that wtf.

Bought a couple of books even though I can probably find them in Kinokuniya here wtf but books are awesome souvenirs! Just buy the appropriately themed book for wherever you are.  Like I bought an F Scott Fitzgerald one here but in London I bought one on Tower of London… and another one on Hitler wtf. 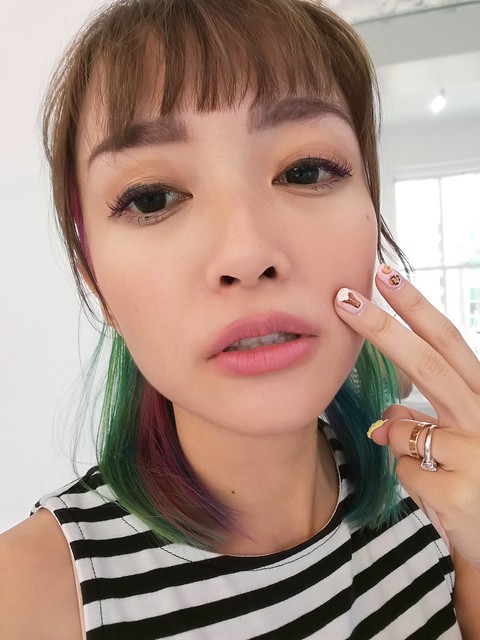 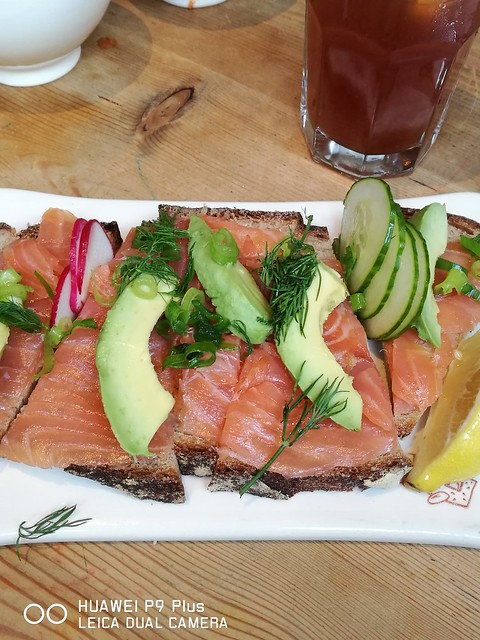 Open salmon sandwich when our Airbnb host bought lunch for us.  Shit la the way he treats us makes me feel like a terrible Airbnb host now hahahaah. 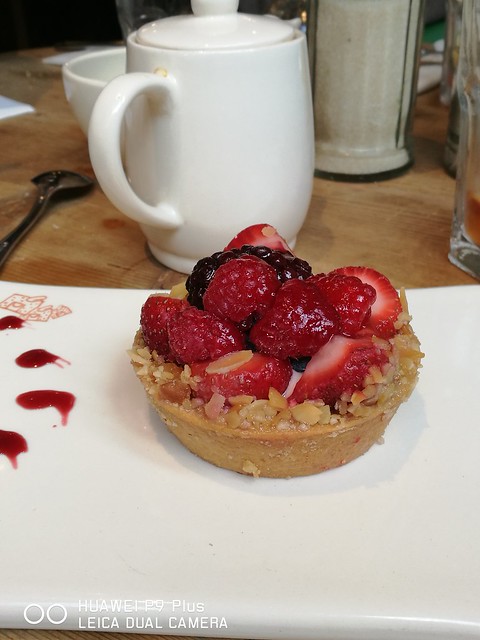 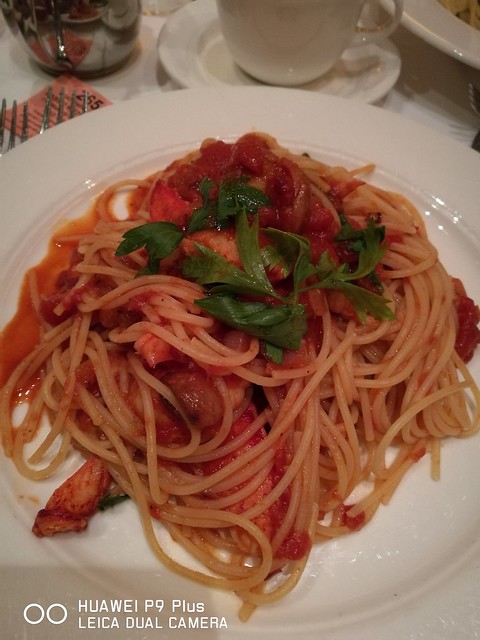 Pasta at Babbo, a Mario Batali restaurant.  You cannot hope to get a spot and you have to book months in advance cos it’s sooo popular.  So being kiasu tourists, we went there at 4.45 pm before the restaurant opens and became their first customers WTF.  We had dinner at 5 pm hahaahah. 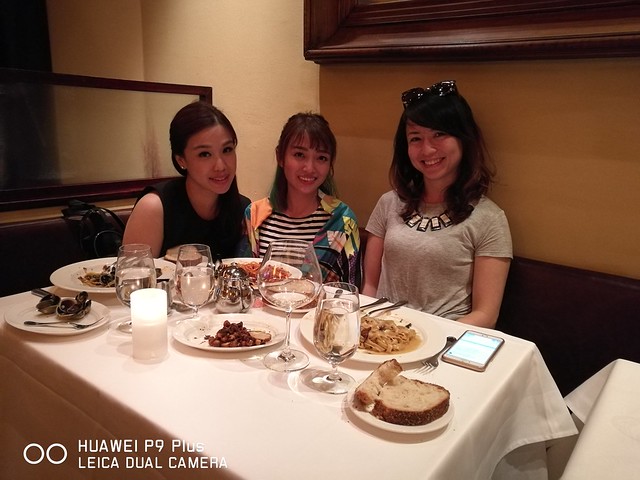 With Lay See who was also in NYC at the same time. ^^ 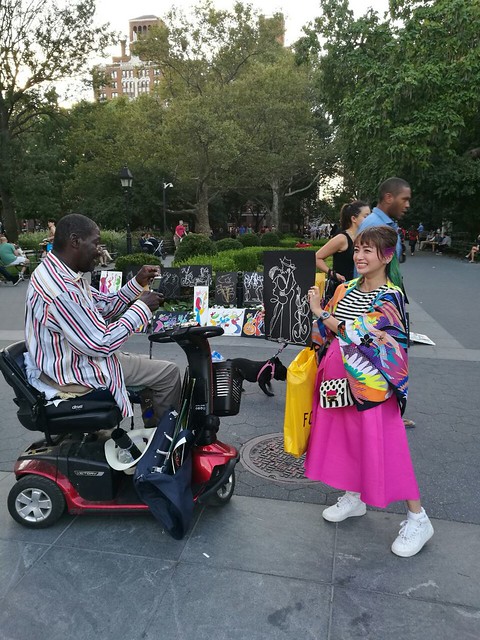 Took a walk in Washington Square Park after dinner only to kena cheated by this man into paying for his stupid drawings he made us.  I knew it already!  But Sieu Ee and Lay See stopped to watch him so we kena sucked into his scam wtf. 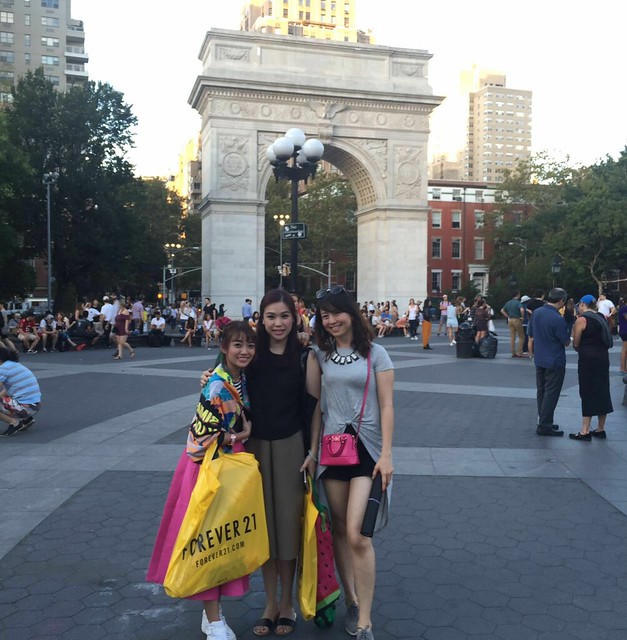 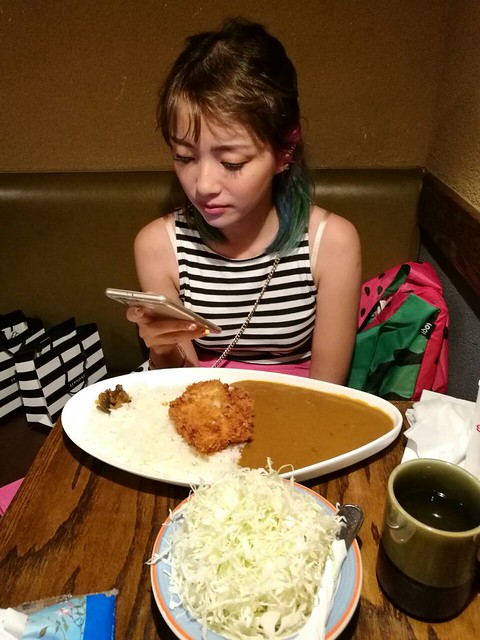 Japanese lunch one of those days. 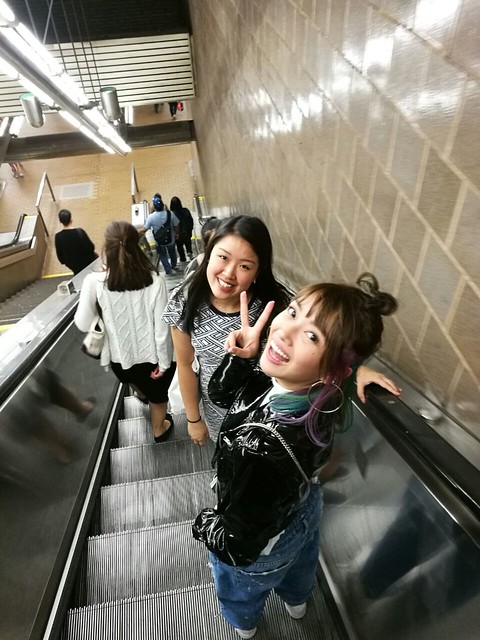 Also met up with a reader Amanda!  Who’s studying at NYU. 🙂  She happily tagged along when we were Target-ing and helped us to carry our bags some more hahaaha. 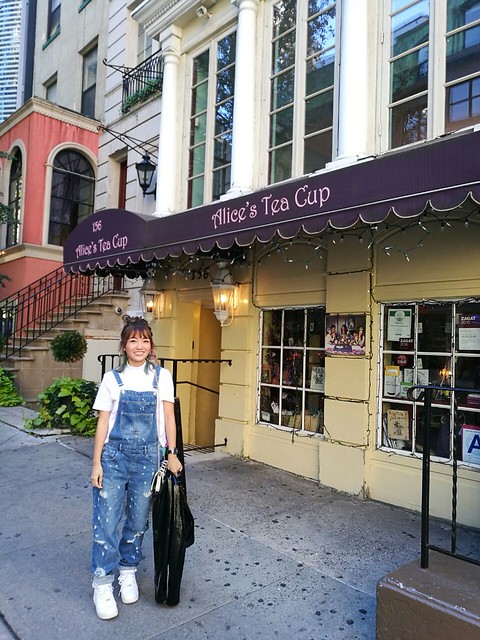 Didn’t go in but Fatty and I had tea here the last time.  Found it was just two blocks away from our Airbnb. 🙂 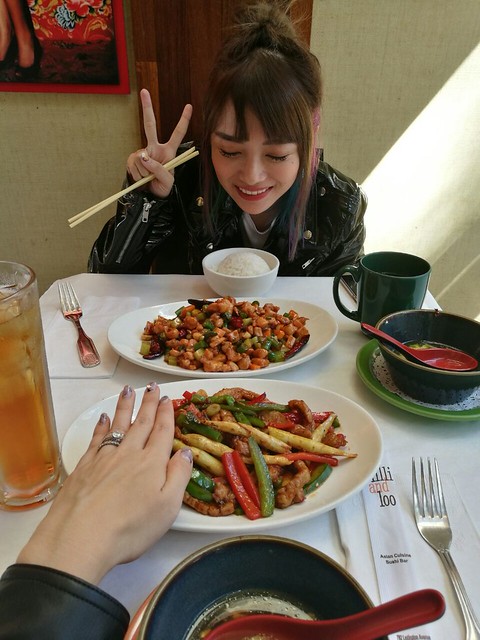 Sieu Ee being very amazed at the portion sizes. 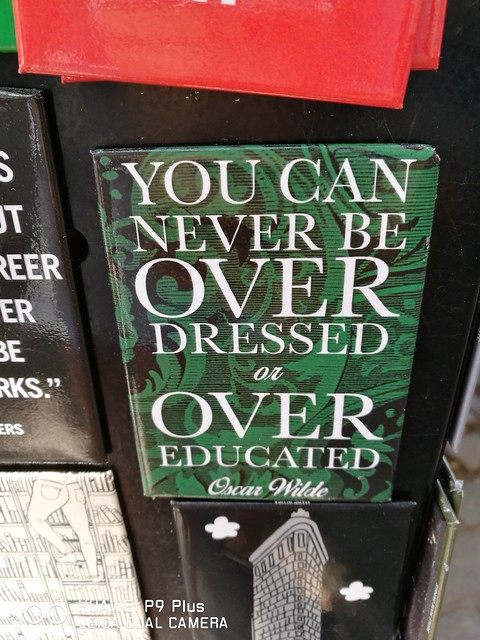 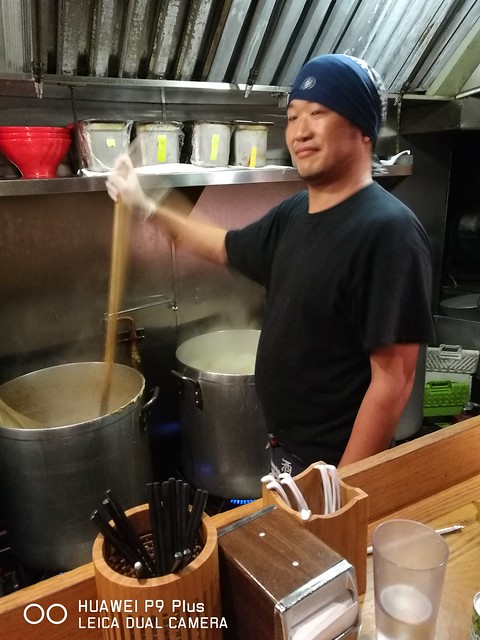 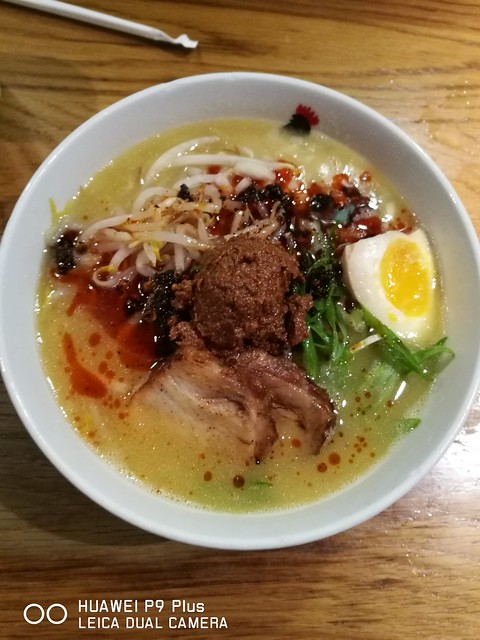 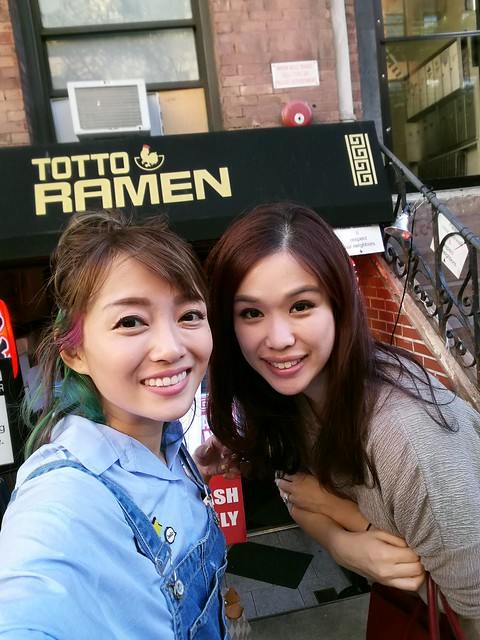 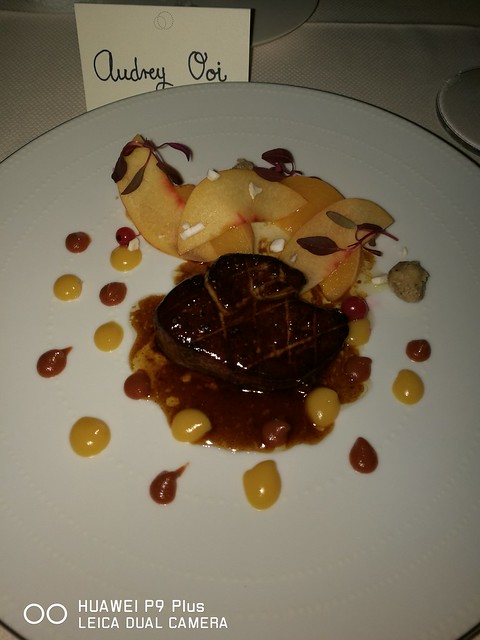 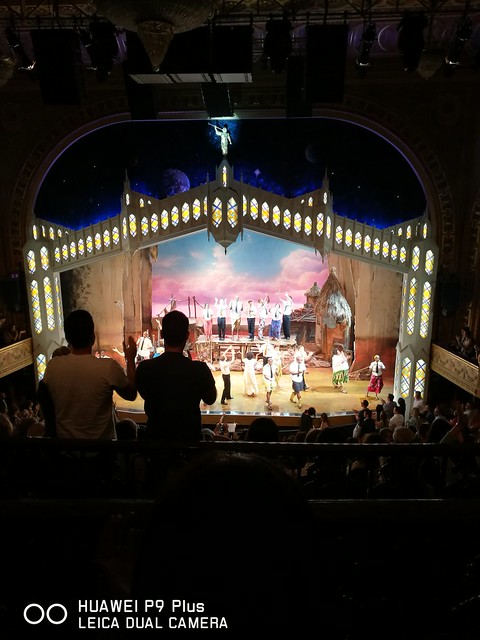 Caught Book of Mormon again. (first time was last year in London) Even better the second time cos I know all the songs and jokes already! 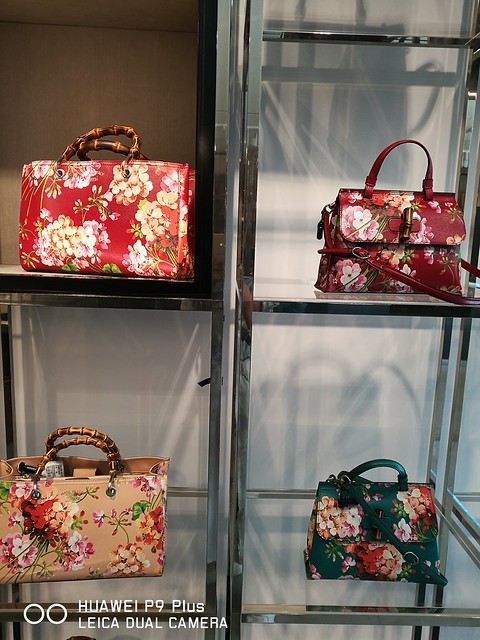 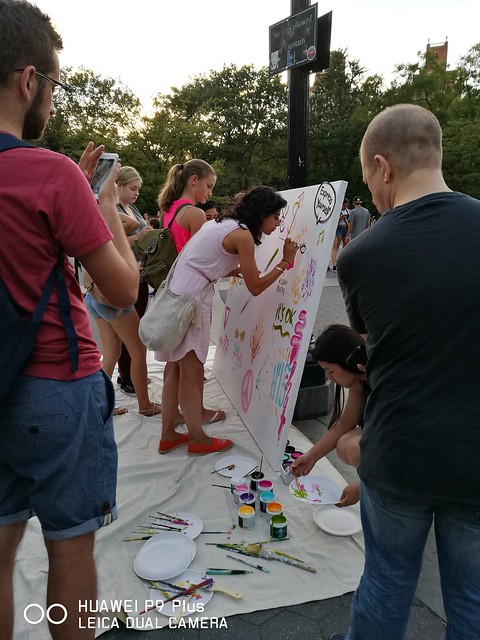 This was cool.  An artist set up  a blank canvas and paint in Washington Sq Park and invited people to get creative.  And he was filming the process.

I asked him what this was about and he said he was just stumped for ideas and just wanted to see what people would come up with.  Actually I kept going up to him and asking questions that I don’t know if he just thought I was flirting badly fml. 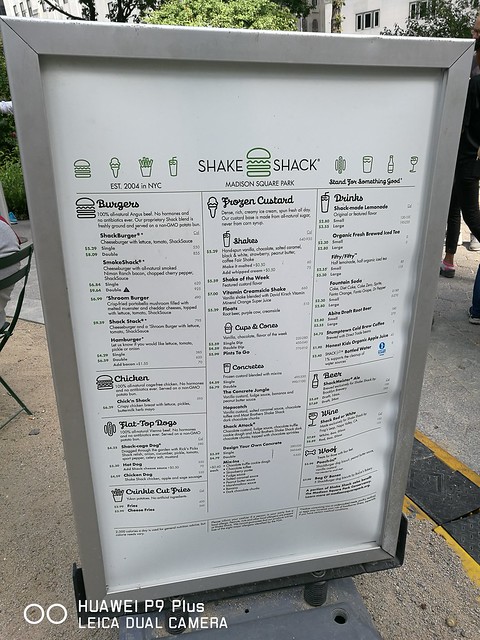 Shack Shack menu.  Bottom right is a menu for dogs omg too cute. 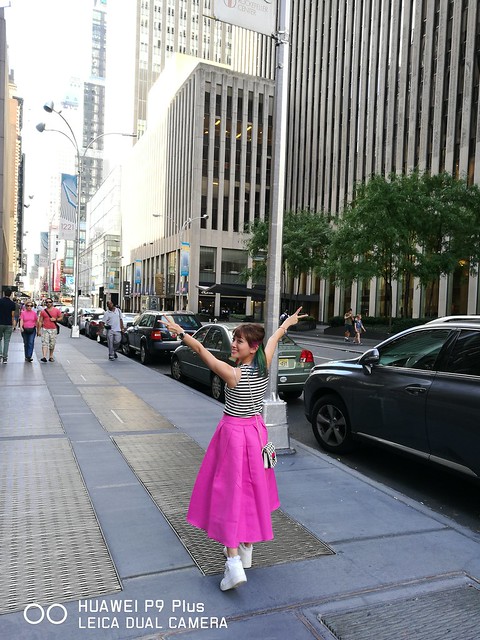