So we made it for Bersih 5.

The truth is, I wasn’t feeling very enthused about it this time round.

And from the very subdued social media posts we saw, it seemed like everyone else felt the same.  Lethargic, tired of seemingly working for no results.  Or maybe it just wasn’t cool anymore to care about the country.

I felt sort of the same. Tired that we were beating the same drum with no obvious changes.

And more, I felt this.  Because last year’s Bersih was very much majority Chinese, I felt defeated.  The Malay population was much subdued because of PAS pulling out and it really crushed me.  Why are not more of them bothered about fairness, clean elections and corruption?

I will be very honest here.  We are very comfortable and therefore you could say we belong to the upper middle class.  If this country goes down, we will still be fine.  We have the financial ability, skills and position to flee the country and settle elsewhere if we need to. The majority don’t.  If Malaysia goes down, they go down with her.  So why are we trying to fight for a better country, but other citizens whose futures are probably more dependent on Malaysia’s wellbeing are not?

So I honestly didn’t plan on going.  But this morning, my mother in law told us she was going, and who’s with her? 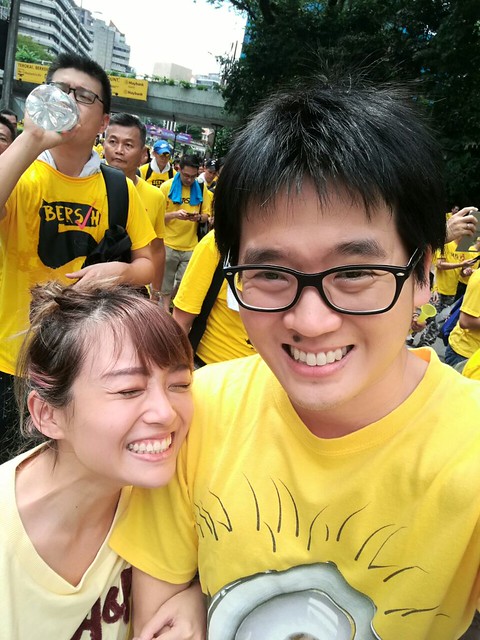 So hi. Here we are hahahaha. I have to say that it’s much easier for us to attend Bersih cos we live right in the city la.  So when we got to Jalan Raja Chulan, we saw this. 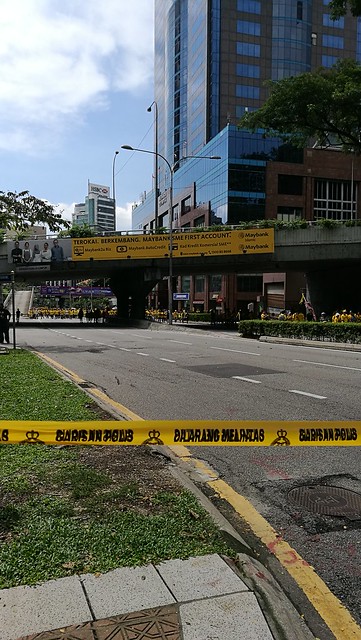 A wave of people walking down Raja Chulan. 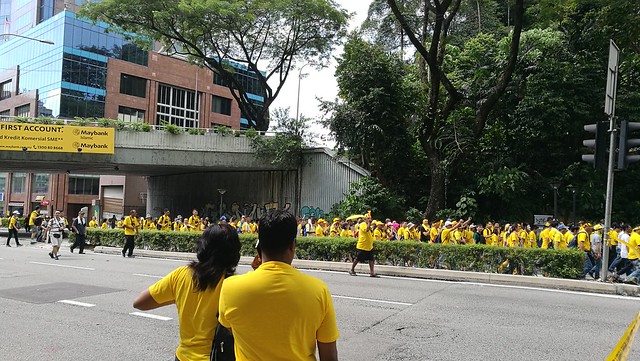 Everyone was heading towards KLCC from Dataran Merdeka I think, which was the new meeting place cos of all the roadblocks. 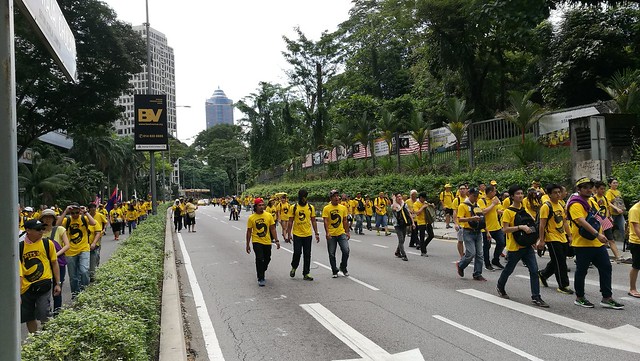 There were a lot of people sure.  But it wasn’t as many as last year’s Bersih crowd.  We decided to go along to KLCC with everyone else.

It was all very peaceful.  Everyone was marching (or strolling) along maybe breaking into cheers or chants, but nothing uncivilized. 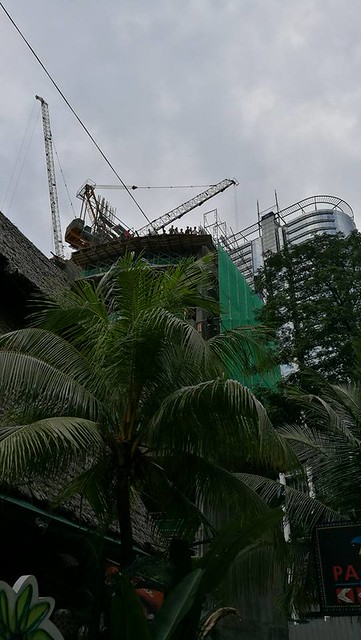 Construction workers were cheering us on as we marched!

At another point, I heard a loud tooting to the tune of a familiar jingle.  Everyone started cheering and I gazed around trying to find the source of it.  Turns  out it was the LRT train on the track above us tooting its horn to show us some support. HAHAHAHA SO CUTE. 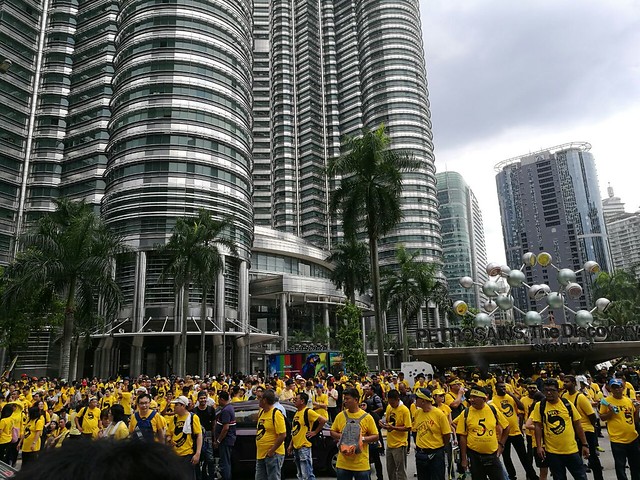 Got to KLCC! Looks like a lot but still not really.  At this point, Fatty, who’s still recovering from stomach foo, decided he had to go or else he’d shit his pants at Bersih HAHAAHAHAH. We visualized memes and headlines such as…

Najis makes an appearance at Bersih

Things in Malaysia are getting really shitty….

HAHAHAHAHAHAHA. So we started to make our way back home.  From KLCC we walked along Jalan Ampang. And there we saw it. 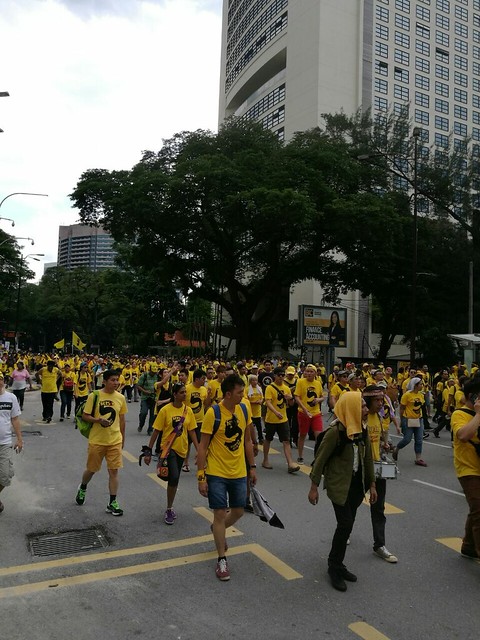 Wave after wave of people in yellow shirts walking towards us.

The crowd we had seen at KLCC wasn’t the full one.  It wasn’t even half of it. 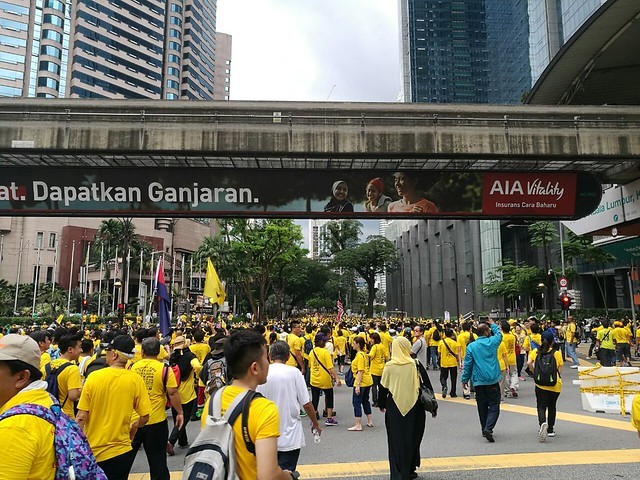 Throngs of people were walking towards us! 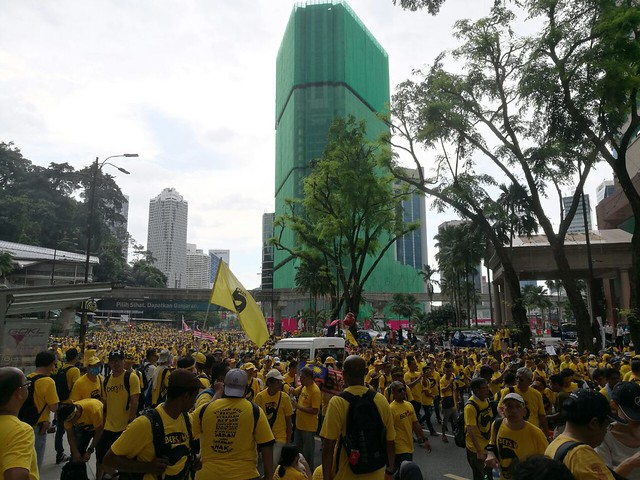 What we thought was just ‘that group’ over at KLCC was being joined by all these other people walking over from other parts of the city.  They were all converging on KLCC as the main meeting point.

People use the word ‘awesome’ all the time but if there ever was a time to use it, it’s now.  As we walked against the grain, we just saw wave after wave of cheerful, cheering people of all races dressed in yellow.  All for a cause we all believe in. If you look at the photo above, the yellow stream of people stretched all the way to the literally where the eye can see!

We didn’t stay for the rest of the rally (cos Fatty turtle head already wtf).

I’ve written over the years about Bersih but this time I notice myself that my blog post is sounding a lot more subdued and less optimistic and passionate.  Chalk it up to hopelessness, to old age, to a feeling of depletion even.

I don’t know if what we’re doing is even working, besides maybe embarrassing Najib on an international arena.  Honestly I’d rather spend my Saturday nuah sai-ing at home or spending time with my kids than slog around in sweltering weather getting blisters on my feet cos I was too lazy to wear socks wtf.

From a self-centered POV, what reason do I really have to attend Bersih? I don’t gain anything from it personally.  My life does not improve.  It’s only for pure love of the country.  But if there’s one chance that this may effect change, if it’s so easy for me to get to the rally, I’ll still force myself to do it.

Thank you to all the Malaysians who went today.