My flower girl and page boy

Last weekend we were in Penang for Fatty’s brother’s wedding.

My sister in law asked if Fighter and Penny would do the honor of being flower girl and page boy respectively for when they walked down the aisle.  I said of course! They (aka Mommy) would love to.

So I went out and found wedding outfits for them and everything. 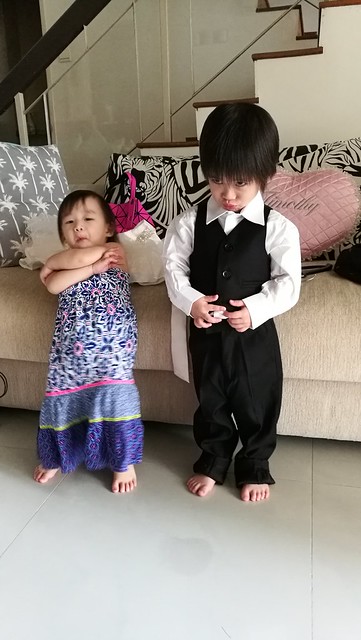 Here’s Fighter. Being not very sure about his suit.  Got this three piece suit from Isetan for RM160 which is a steal la!!! Includes, shirt, pants, vest, coat and bowtie ok damn worth it. And there’s Penny showing attitude cos she got no new clothes. 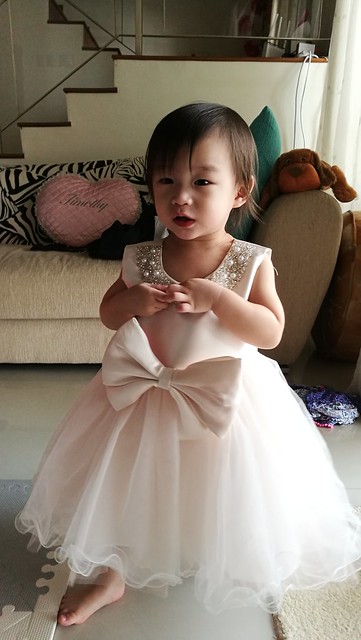 There you go Penny! Your flower girl dress!  She was so excited to have a new dress but on the wedding day itself she chose to wear her pajamas WTF.  Then when I told her cannot, she asked to wear her swimsuit FML. 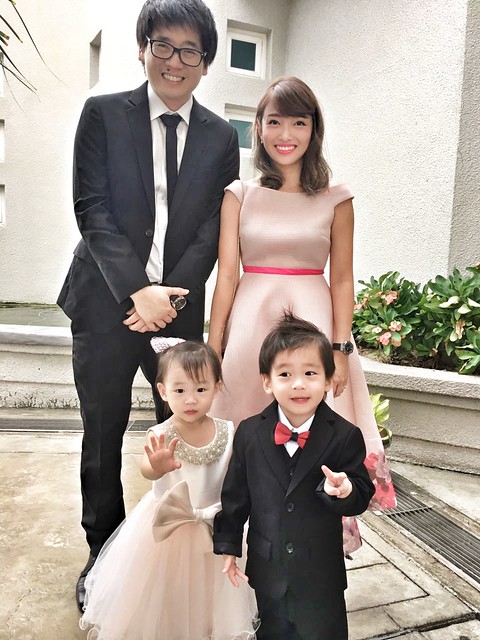 Anyway we finally got everyone cleaned up and dressed and ready for the wedding banquet. ^^

So in the days leading up to the reception, I’d been briefing Fighter and preparing him mentally for what he needed to do.  We even had a rehearsal the day before where they did splendidly – although it was mostly Penny giggling and dragging her Koko along by the hand down the red carpet wtf.

But the day before don’t mean shit wtf. One good rehearsal means nothing so the actual day I was predictably nervous hahahaha.

I had good cause to be. *grim*

The kids were both okay during cocktails.  But earlier on during the tea ceremony, Fighter was already acting up.  He does this often at big events with lots of people; I think he feels overwhelmed by the people that he gets irritable and clingy and just a downright nuisance of himself.  So at the tea ceremony, he clung to the bride. Imagine the poor bride in her wedding dress, carrying this threenager who is whining and sobbing into her shoulder. -_-

By cocktails though he had settled down so I had a faint glimmer of hope.  He and Penny were rushing around playing and generally looking happy and relaxed.

Then when it was time for all the flower girls and page boys to line up in front of the bride and groom outside the ballroom for the march-in, everything went to poop wtf.

First, Fighter wouldn’t take his place in line because he wanted to….. crawl under the bride’s skirts. -_- As if that wasn’t enough, he wanted to take her bridal bouquet with him. -__-

If ever there was a time I was a tiger mom, this would be it.  I cajoled, hissed, threatened, turned purple in the face.  Nothing worked.

In the end I pried the bouquet from his small, vise-like grip, tossed it back to my poor sister in law, yanked him away from her skirts and forced a calm voice and said, “Get ready. We’re going to walk in and find Grandma.”  Then only he relented and guai guai stood in his position wtf. 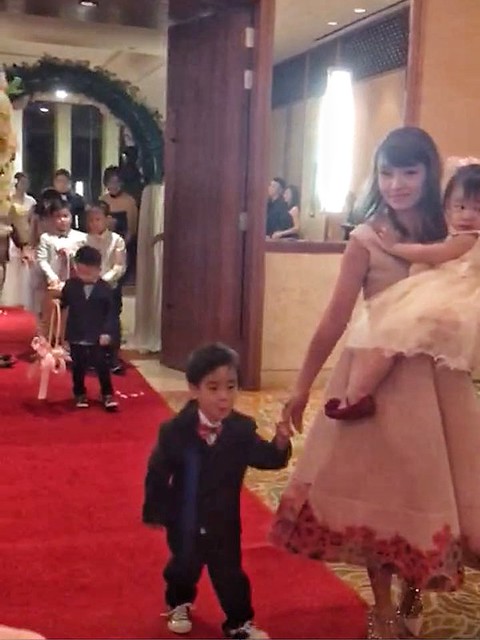 I was thankful enough he agreed to march in….. until I saw this face. WTF! He was making faces the entire trip down the aisle oh Buddha help me hahahaha.  I really don’t know if I should laugh or cry.

And yep. That’s Penny refusing to walk despite her over enthusiasm during rehearsal.  Didn’t have the energy to battle a second toddler so I decided to just carry her and walk in.

So we were gliding gracefully down the aisle – well as graceful as possible with that monkey face on wtf.  Everything seemed to be on track.  We were already halfway down the aisle; just a little more and my job is done and I can put down this 10kg froth bubble wtf.

Then it happened.  Fighter jerked to a stop on the red carpet.

I looked down, confused…. and saw with horror that one of his shoes was missing and he was in the process of kicking off the other. 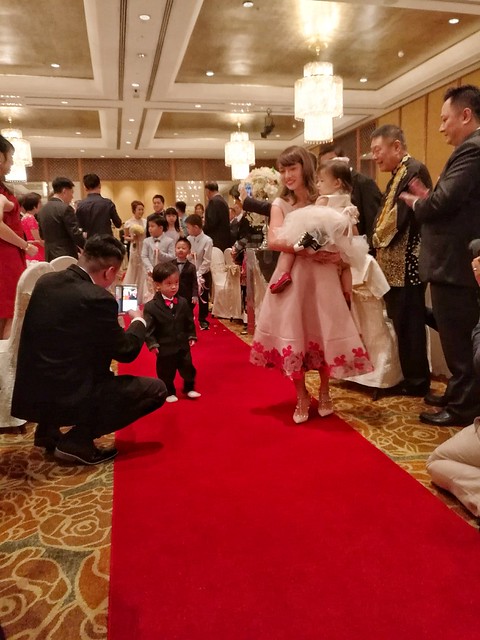 I frantically looked around and saw a smiling guest in a nice suit bend down and pick up Fighter’s missing shoe and carefully hand it to me.  By then Fighter had kicked off his other shoe and was looking around defiantly for anyone who dares to challenge socked feet. T______T   Seriously dunno if I wanna laugh or cry FML.

But before I could try to chivvy him along, he suddenly spotted what he was looking for the entire time – Grandma.

Grandma and Grandpa were standing at the front of the ballroom, with the other relatives, smiling and clapping the bride and groom in.  Fighter saw Grandma, shouted “GRANDMA!!!” and dashed to the front to jump on her lololol.

The other older flower girls and boys continued to walk sedately behind, in tune to the music.  I hastily snatched up Fighter’s other shoe and scurried to the front, Penny bouncing on my hip. 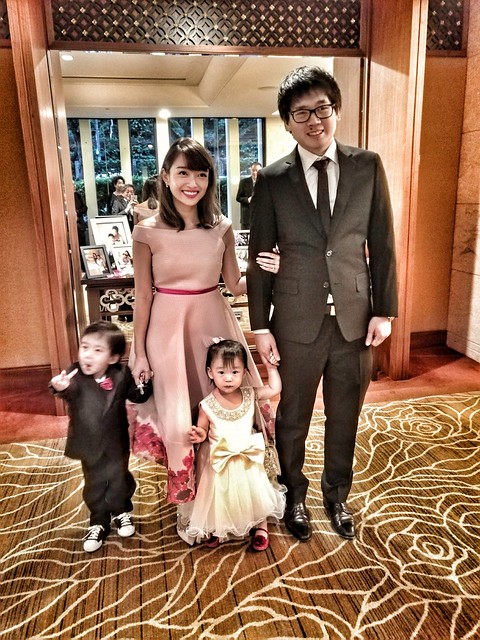 I  would like to extend my heartfelt thanks to my brother and sister in law, who are super chill and didn’t care about a mad toddler up to no good on the red carpet. Hahahah. And thank you to my kids for teaching me patience and allowing me to do weight training.