Rejected because of my blog

Recently I got rejected from a very major application that I had submitted.  Remember me mentioning #audsecretproject? Well, that was a big part of it and I was rejected, very politely, but also very firmly.

I appealed, and that got rejected as well hahaha.

To be honest, not only had I put in effort, I’d also invested a lot of heart into my application.  I think this was the most dreaming I’d allowed myself to have since my application to college.  People I talked to who were in the “in” assured me I would be a shoo-in, and so when I got my rejection I was stunned.

The reason? They did not like my “blog persona”.

It took me a while but I crafted an appeal which truthfully, I felt was even better written than my original application hahaha.

Still got turned down.

This is an excerpt of my appeal:

My online persona was born out of aspects of my personality, the community that I and my readers live in, as well as our local culture and communication style.  It is a way of connecting with my readers; those who have followed me for years know I have mantained my values and integrity over the years.  While I realize my style may be unconventional, I believe I have used my influence positively to raise awareness for issues that are important to me.
That being said, my blog is not representative of the person that I am; it is only one facet of my personality…. I mentioned my blog because I believe the skills which I have learned over the years – to market, to persuade and influence, to form bonds – would hold me well in my journey, not because I plan to tie [redacted] to my blog.

They weren’t having it though hahaha.
I have been turned down by clients who felt I was too vulgar.  But I’d never felt the loss, believing it was best to be true to myself and not change my blogging style for outside gain.
But this was the first time that I had ever been rejected by something so important to me on the basis of a blog persona that they disagreed with.
I was in disbelief for a while.  A kind of aching doubt washed over me as I wondered what exactly they disliked about me (or my blog).  For days I rewinded my blog posts in my brain. I’d find myself pulling up my blog on my phone and just scrolling back to see what could I have written that would be distasteful to an outsider.
A lot.
For starters, I do swear quite a bit.  I feel like I’ve toned down in recent years actually, but remember that awful MAS saga? That was enough to resuscitate the potty mouth in me wtf. But could swearing be a reason to exclude someone from a position? Possibly, especially if the position is say, related to children.  But I don’t know, that seems to me an extremely narrow way of looking at it — wouldn’t you expect an otherwise good candidate to be able to hold their tongue, like any other person in a professional setting? I really don’t know.
I guess I also rant a lot. I call out individuals and corporations who I feel deserve it.  Maybe that shouldn’t be up to me — by doing that, am I playing judge and juror?  On the other hand, the way I see it, I have to. In Malaysia, a lot of misdemeanours (or crimes) are unjustly swept under the carpet; it’s become a terrible culture of ours.  If the authorities aren’t doing anything, why should we submit to this culture of being afraid to speak up against injustice or rude behavior?  I’m not saying that my posts are calling out criminal activity wtf, cos they’re usually corporate injustice or social/ethical wrongs, or just people being assholes.
Should I rethink speaking out? I think I could definitely work on being more unbiased and less sensitive lolol. I would work on being less trigger happy and to take a breather first before jumping to reply to scorch someone wtf.
Would I stop calling out or “prosecuting” guilty parties? Uh not to blow own horn la but I believe that I have a pretty developed sense of justice which I use to guide my conscience.  And if I’m wrong I’d apologize or call myself out. I figure I’m as good as anyone to be a judge lol.  But I don’t think I would stop voicing my opinion on rudeness or unfairness.  I have a social media voice and I still believe that I can (and have done) good with it.
That’s the fix I find myself in today.
I got rejected from something very important to me — that would have kicked me off on my journey to achieve #audsecretproject.  Because I was rejected, I am unsure what to do next now. And I failed to gain acceptance, due to my blog which had so far given me so much joy, opportunities, money, friendships… Hell, it even gave me my husband hahahaha. Not least, it gave me a way to form bonds with people I’ve never met, to spread awareness and do more good than I could ever have done otherwise.
So would I ever stop blogging, in order to achieve something I wanted? Probably not.  Would I change the way I blog to be more ‘acceptable’? I don’t really want to either.  However my blog has been perceived, I have stayed as honest as I can throughout the years.  I’ve written about successes and happiness, sadness and failures — heck, even this blog post is about a failure.   The only hurts or grievances I haven’t written about involve people in my lives that are better left unsaid online. I think I’ve consistently maintained my integrity and values which is not what many people can even say, I think?
So no. My blog is here to stay. ^^ And what I need to show people is that while Fourfeetnine is Audrey, all of Audrey is not Fourfeetnine either.
edit:
I received some thoughtful feedback on my post and I think I should add a few more words.  I was too focused on my own thoughts while writing this that I forgot that this has been a new learning experience for me, which I should be grateful for. I think that the party who rejected me did have sound reason to, and I respect the decision and appreciate that they took their time to really review my application.  And to the people who talked to me, they deserve all my thanks for being so patient and helpful in my application journey.
*****
Uhhhh sorry super random and totally not in keeping with this blog post but here’s an announcement!
I’ve been looking for a way to sell off our stuff — as you know from Dayre, I am spring cleaning and attempting to Konmari our house. In an attempt to build a capsule wardrobe, I packed away tons of very nice clothes of mine, as well as the kids’ clothes and shoes that they’ve outgrown but are still nice.  I’ll also be selling some bags, as well as a ton of makeup and skincare that I received from various sponsors and judging for Her World Beauty Awards.  All are new, but some may be opened cos I had to test them for judging. All if used, have only been used once and can be considered new. 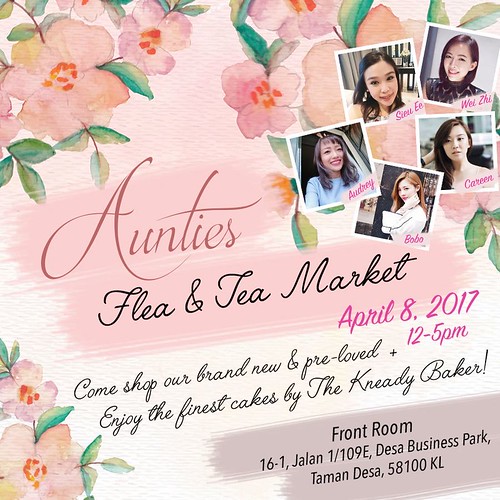 So my friends and I just decided to organize our own market! It’s going to be super casual la. Just us, our stuff and a Saturday afternoon spent with cake and coffee. 😀
Come ok!
13 Comments