What’s in my memory box

So I’ve been Konmari-ing like mad over the past couple of months.  We’re moving into our new place soon and I didn’t wanna lug along five years worth of rubbish with me so every day I’m diligently asking myself, “does this spark joy?” lolol.

When I first heard of that phrase, I was like what is this nonsense? Where got things spark ‘joy’ one!? But after that I took it as just a way to filter out rubbish that we don’t really like or need.  The phrase ‘spark joy’ evokes high standards until must be joyful so it’s surprisingly effective for filtering out stuff we don’t actually need. 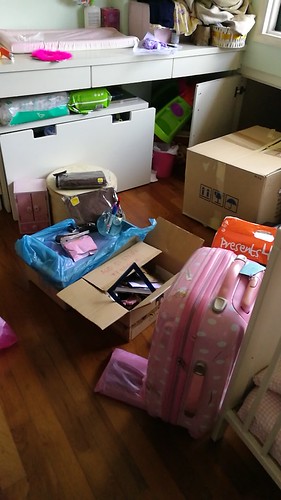 So anyway the other day I tackled the storage cabinets in the nursery…. and found a box filled with…. memories! OMG I’d totally forgotten about it leh. But there it was.  A plastic drawer wrapped with cut up plastic bags filled with cards, letters, photos and random junk that all held specific memories at different points in my life.  It’s like my very own time capsule and it was damn fun going through it! And snapping photos of it and sending it to the relevant people. Cos my memory is worse than a goldfish and it really brought back a lot of memories for me.

Like this clamshell phone hahaha.  Circa 2006? Sony Ericsson ok hahaha are they even around anymore wtf.  It belonged to my ex boyfriend and I was SUPER in love with clamshell phones cos it was a very Japanese thing to have and I was super in love with Japan that time hahaha.  Made my then boyfriend give this phone to me and then blinged it damn badly with pink diamantes.

My placement of the diamantes damn bad la now I look at it it reminds me of pink shiny pimples wtf. 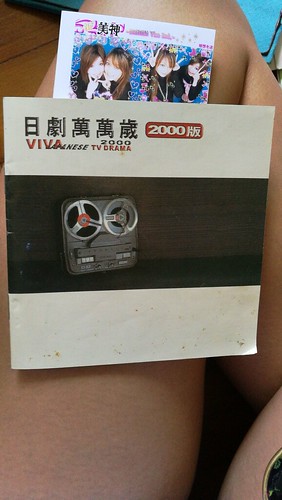 Went through a very long Jpop phase and until now I still listen to older Jpop.  This was one of the CDs that my brother owned when we were both in high school.  Recently one of my favorite songs from the CD, ひだまりの詩 randomly popped up in my head after years and I was reminiscing with Ooib about this some more hahaha coincidence or what. 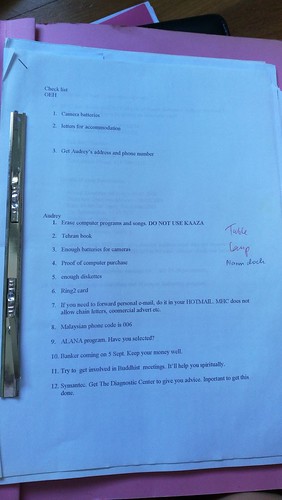 HAHAHAHAHA a checklist written by Fat Her Ooi before I moved to the US for college.  This is like a snapshot of all things 2000s: “DO NOT USE KAZAA” “ENOUGH BATTERIES FOR CAMERA” “ENOUGH DISKETTES” “BRING RING2 CALLING CARD” LOLOL.

I’m now a (relatively) self sufficient adult but 13 years ago, I was this annoying thing that Fat Her and Mummy Ooi worried about incessantly lol.  Found another note from my mom reminding me to put water in my kettle before setting it to boil hahahahah they really no faith in me wtf. 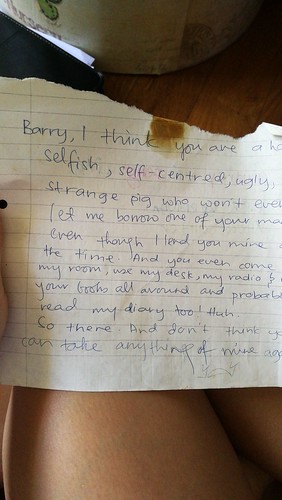 HAHAHAHAHAHAAH. Ooib and I used to be mad possessive over all our things.  Check out this super angsty hate mail I wrote to him just cos he didn’t let me read his magazine hahahahahahaha.  Pretty sure we were both in high school at this point. 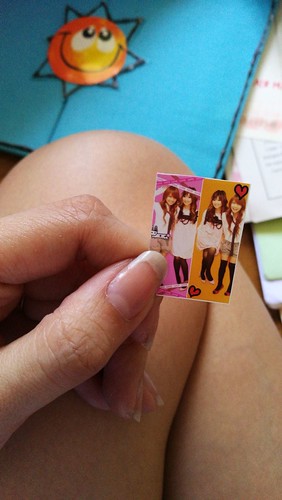 And purikura with my soulmate wtf.  I think we went a bit mad when we were studying in Japan wtf every week also must go and take sticker photos.  Often with coordinated outfits too hahahaha. 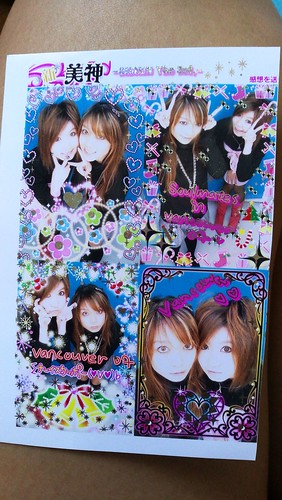 This particular set was taken in Vancouver though, our senior year.  I stayed with Angela our whole winter break. 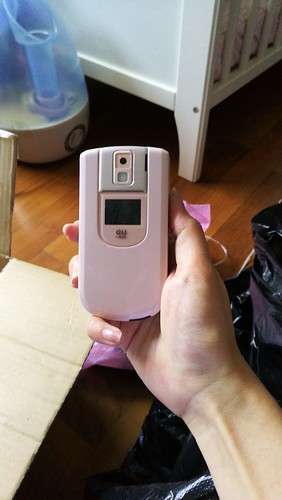 My phone while I was in Kyoto.  Circa 2006-2007. Eh until now I think their design is damn nice leh!  Timeless design wtf I would totally use this phone right now. 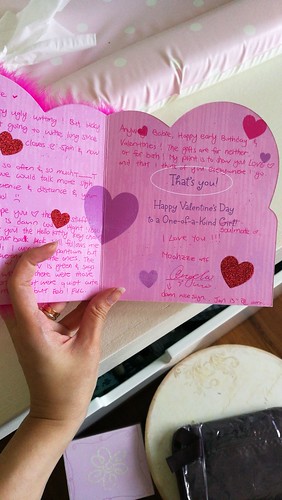 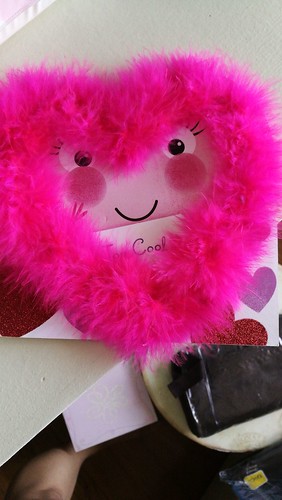 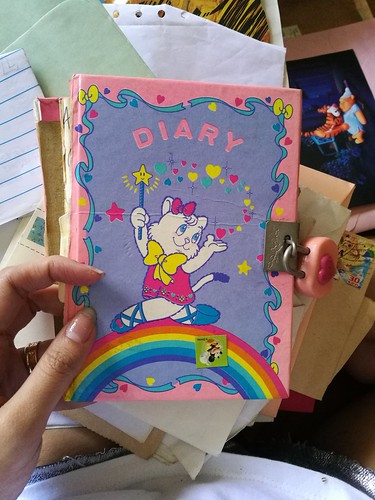 My first diary! The precursor to Fourfeetnine.com hahahaha. It had to be Lisa Frank lol super 90s can. 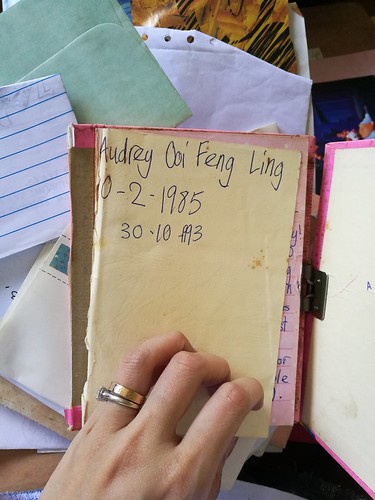 I was eight years old and wrote about everything under the sun hahahaha. 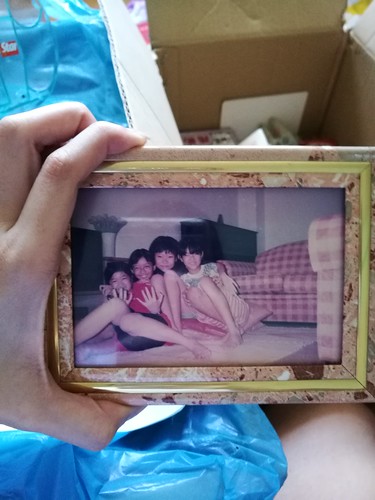 My best friends.  (I’m the nerdiest looking one obv wtf) We were 12 and did everything together – sleepovers, boyband concerts, etc.  I and Davina, on the left wanted to be Disney animators and we’d spend hours sketching cartoon characters in school wtf.

We’re all FB friends but I only regularly talk to one of them, Hsin now. :/ 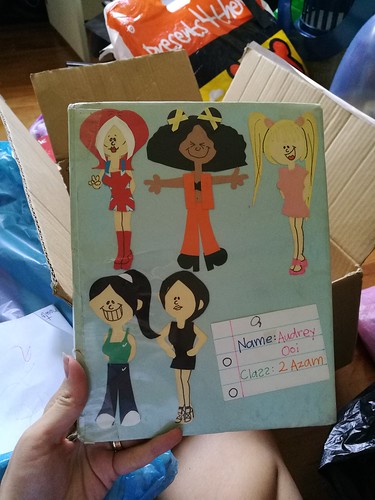 OMG my proudest work can. One of the major projects in Art class was making a book from scratch. I remember cutting out pages, then sewing and binding them together.  Then designing and creating a cover.  My cover was paper cut outs of the Spice Girls hahahaha I think I was 14 here. 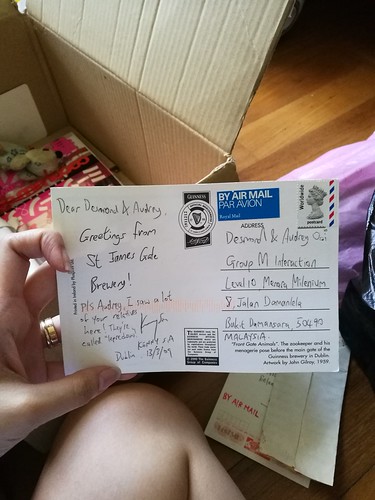 A postcard Kenny Sia sent me and my boss cos with our client, Guinness, we sent him to Dublin. 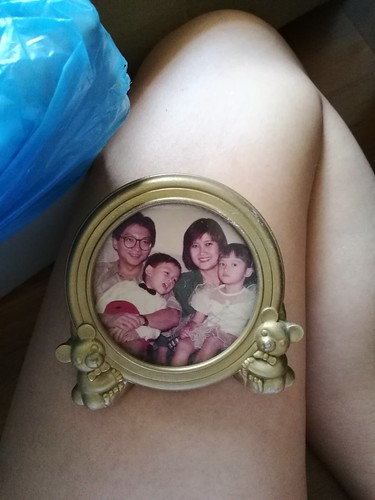 Family photo with the Oois! I was five.  If you’re wondering why I look so serious, it’s because I got it into my five year old head that I’d look cooler if I don’t smile wtf.  I still remember this train of thought hahaha. 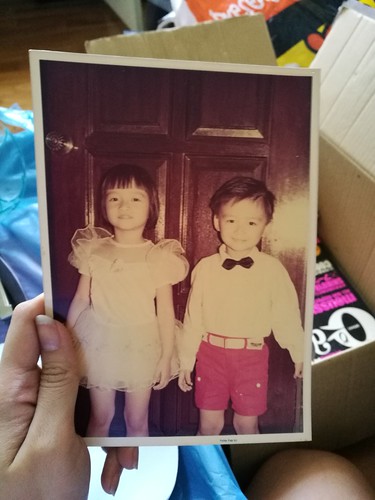 Clearly forgotten about my no smiling rule in this next photo wtf.

That’s all I snapped photos of.  But I found so many greeting cards, handmade letters, notes passed in class, letters and postcards from friends who moved away. Of course, there were the usual declarations of BFF to each other (we were 12 hahaha) but what really hit me is the amount of effort inserted in making these tangible memories. All these little notes meant something to me which is why I kept them, and reading them now, they still mean something to me because they made up my childhood.

Fighter and Penny will only have text messages and Instagram comments to remember their childhood by. :/ #FTL