What do you want for your child?

Sorry I haven’t blogged in weeks!  And I’m not sure if this blog post will interest anybody except parents.  But maybe some parents won’t even be bothered and think I’m on a nutty rant wtf.  But here goes.

The other day, I received an Instagram DM from a friend…. 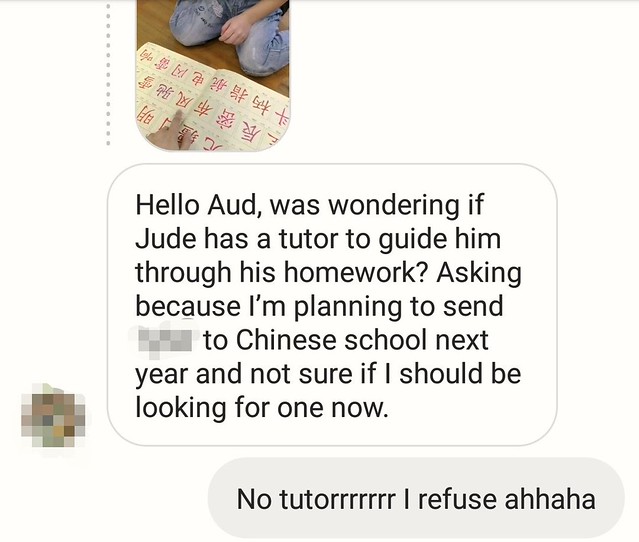 …in response to this video I’d posted on IG Stories.

…in response to this video I’d posted on IG Stories.

It’s Fighter ‘reading’ what I assume is Chinese prose from his textbook.

Now I put the word reading in quotation marks cos I don’t think he’s really reading!  For all those of you who were impressed by his reading, sorry ah must disclaim first hahaha.  While I know he can read some words in Mandarin already and probably recognizes many from these two pages, I’m pretty sure he’s just reciting from memory the sounds that he’s learned.  Cos he definitely doesn’t understand what he’s saying himself lol.

Nevertheless, a lot of people are impressed that even if he’s not really reading, he’s doing so well in school, pronouncing his words flawlessly, and of possession of an impeccable memory etc.

But when my friend sent me that DM above, I felt like i really needed to talk about this wtf.  I haven’t blogged for two weeks now! So these two weeks I’ve actually been immersing myself in reading about kids and childhood and education *patriotic tune* Hahaha sometimes I can get super nerdy and obsessive one la wtf.

A lot of moms around me have been sending Fighter and Penny’s peers to all sorts of enrichment classes!  As babies you start with Shichida and flash card classes (I swear they’re a thing just dunno what they’re called), then you move up to sports classes, language classes, and what not in addition to preschool and kindergarten.

Fighter and Penny are not exempt!  Fighter goes for two classes outside school – swimming, and reading & phonics.  Swimming because this is a life skill and his life could literally depend on it wtf.  Reading because that’s a skill very important to me, if not the most. I am a blogger after all wtf.

Penny goes for a weekly toddler gym which functions as a foundation to proper gymnastics.  The only reason she goes is because I heard they do a lot of stretching which could be good for Fighter’s growth.  I signed them both up but Fighter hated it so I dropped it. Ironically, Penny loves it so she’s been there ever since.

Beyond that, Penny has asked for ballet classes and I’ve enquired, but I haven’t registered her for any.  And that’s it. Even then, I sometimes wonder if that’s too many classes at their age.

So my answer to the question is:

Because children need to play.

OK I can hear a lot of skeptics already wtf.  Playing is fine but so is self improvement and learning new skills and hitting early milestones…. right?? So let’s do an FAQ wtf.

Why should kids play?

Mixing with other moms through school, Dayre and other communities, I feel like there’s this huge rush to send children to enrichment classes.  Because we want our kids to learn, get a head start, and also thanks to peer pressure, we’re kiasu about staying on par with other children or better still surpassing their milestones.

But so what if your kid can decipher flash cards? Or do mental math at three with Shichida?  Or read as a toddler? Do all these things really matter in the long run?

Play is important because that’s how we humans (and other mammals) learn.  When kids free play — that is, unregulated play, chosen by children themselves with no adult interference) — they learn how to use their imagination.  Imagination is not just for making up stories or pretending although these are certainly part of it. To be a successful adult, you need to have a strong imagination.  Imagination to devise creative solutions to problems, for example. Or if you were an architect, the imagination to design and build a house. Even scientists need imagination when they generate hypotheses.

Play develops children’s social skills.  Free play is democratic because it’s entirely up to each child to participate (or not).  When enough children are unhappy with one of their gang, they might stop playing, and children naturally want to play.  So to keep play going, children learn how to cooperate with each other, to compromise, share and even resolve conflicts.  Play is also how kids practice self control.

You know when kids pretend they’re building a real building with Lego?  Or they’re playing mommy and daddy with their teddy bears? Or even Star Wars characters?  They’re practicing real life. (Even if Star Wars and Batman isn’t real life wtf.) They reenact real life situations in a safer, “manageable”… version.  They digest real life scenarios and learn how to deal with them. They learn to master life challenges and the appropriate emotional responses to them.

I think this passage put it very clearly:

At real play, children are in charge, instinctively making hundreds of decisions as they assess and determine the levels of risk they want to take, physically, emotionally and socially: mastering, day by day, an increasing repertoire of skills, adding to their bank of experience.

Throughout the animal kingdom, the play of the young is commonly observed to be a rehearsal of life skills, fundamental for species’ survival. Human children are no different, needing the make-believe world of play to experience and master the fullest range of challenges – and their emotional responses to them – as a series of lessons for the world they will eventually have to negotiate for real.

So, through play, children acquire confidence, but also an awareness of limits and boundaries. They learn, in short, how to be safe.

Every parent wants something different for their children, but for me, I want my children to be emotionally and socially equipped for the world, to know how to get along with others, to be confident and aware, to take care of themselves,  to be wise. Academic skills are important but they will learn these eventually.  Let them play for now.

Because tutoring takes away time that could be spent playing.  And being creative.

Aren’t you scared they’ll fall behind?

Who say I don’t struggle with this!!  Everywhere around me, I see kids sent to tuition and organized classes and I have to swallow a bubble of panic that my kids are gonna get left behind wtf.  But we have to remember that while organized tuition has its merits, we cannot deny the importance of play. When we didn’t have all these classes what did humans do? They didn’t fall behind – they played to learn.

Schools are getting harder today and yes there’s always the risk of them failing behind in school because they’re not getting extra tutoring.  But is this the education I want for them anyway? An education whose efficacy is based on standardization and testing but not necessarily actual learning and developing the love of learning?  What’s the purpose of tutoring besides prep them for good exam results? They learn for exams but forget everything immediately. Is that really learning?

I have no answers to these questions yet.  But i know that as of now I am unsatisfied that any school I’ve seen here will fulfil what I want for my kids.

Have you thought about what you want for your kids?

P/S: As you can probably already tell, I am a huge advocate of free play wtf.  My problem is that we live in a condo and our condo playground is always infested with mosquitos FOL.  We also live in the city which means having to drive out to go to a playground instead of just walking to the neighborhood playground which is what I did as a kid.

But I’m trying to create the playground experience where kids just congregate in the neighborhood or the playground and free play without adults tagging along.  So I was thinking of setting up a play group and meet in a particular playground at certain times.  The kids can play and the grown ups can even set up a roster to watch them so that not every parents needs to be there.   We live in KL so a convenient location will probably be around Bangsar, Hartamas, Mont Kiara or TTDI.  If anyone is interested, email me and we can talk! Suggestions are welcome.  fourfeetnine[at]gmail[dot]com.