“Don’t underestimate the value of doing nothing.” – Winnie the Pooh

The last few months have been, to say the least, hectic for me.

We were rushing to finish KL Eco City on time before our official launch party.  Then came the launch party and it was a big, busy, rushy (but very fun and awesome must clarify ahem) event. 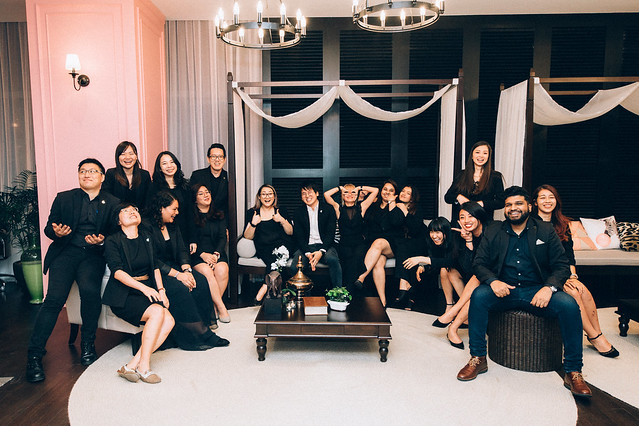 And then I had a bunch of other stuff to work on.  A bunch of blog campaigns featuring blog posts came in.  I’m #grateful (lolol inside joke) but the deadlines were all around the same time and I was dying wtf.  Then came a bunch of admin stuff: applying for visas for the family and for Dada our helper to go to Australia.  Our visas are sap sap sui but Filipino applications come under a lot of scrutiny and there’s a long process to it. T3T

Even tougher was applying for my Canadian visa cos Angela is getting married end of the year!  Wah lau have to submit my entire life history like this.

And then, we also started work on the third Colony!  Another flurry of drawing plans, artist drawings, and licensing work.

Anyway to cut a long story short, I was bogged down with a lot of work non stop.  Normally I can handle but I think the blog deadlines took up any extra time I had left and I was quite exhausted.  To make matters worse, I think my kids are two of the clingiest children I’ve ever seen in my circle. -_-  Whenever they’re back from school I gotta say bye to any productive time I might hope for wtf.

And then and then.  I also made a very last minute decision to switch Penny to Fighter’s school next year, instead of waiting one more year.  Mostly cos I’m tired of driving to two different schools back and forth every single day hahahaha.  Penny is very independent (when I’m not around wtf) and mature for her age, and I think she’s ready to go to a bigger school like Koko’s.  So that was another mad rush – going to the school for a tour and to ask more about the Pre-K class, then preparing the documents for registration.

So I was feeling slightly burnt out.  Two Fridays ago I decided to take a break and go have breakfast with a mommy friend while waiting for the kids.

Then this happened wtf. 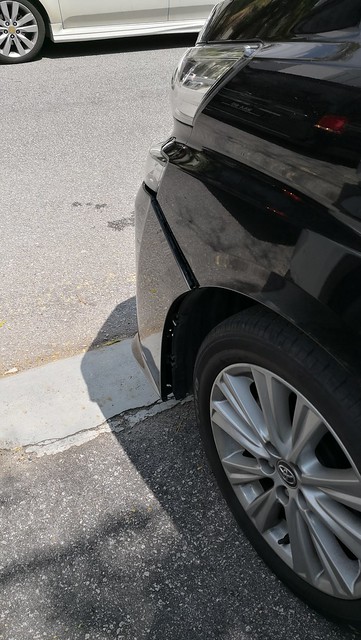 If only bumpers that fall off work on the same principle as teeth.  Got Bumper Fairy to come and give me money when my bumper comes off. Hahahahha.

What happened was that there was no parking so I had to ask the valet to park our van for me.  He parked on the side of the road and I didn’t know the sidewalk jutted out in front of my car!  So when I tried to leave, my bumper tried to stay behind hahahahaha. T____T

That day was another long day for me.  The next day, Saturday 8 am was also Penny’s school registration, and like in Fighter’s case, I was prepared that we will have to go line up overnight to register. -_-  I thought if I start the queueing at around midnight, I should be safe.

Fatty was away in Taiwan that day and I was so tired.  After putting the kids to bed, I thought I’d just order some Mcds delivery and just dinner at home before going over later that night to check out the queue.

I wanted to cry already wtf.  Cannot even eat my dinner in peace meh. T_____T  Resigned, I waited for Mcds to arrive, then grabbed the sack of food and got into the car, a smaller car that I drive if I’m not ferrying the kids.

On the way out, I hit our own front gate WTF.  Seriously wtf Aud. 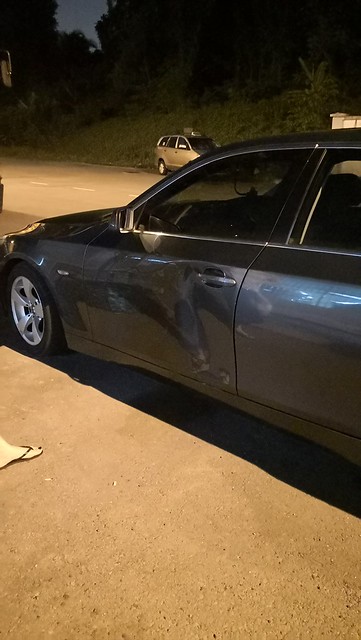 Look at my dent, just mocking me wtf.

Quite bad leh cos the gate fell off its rails WTF hahahaha.  T_____T  And the gate paint is all over that dent too wtf.

I really nearly cried then.  On one day, I had two accidents.  With two different cars.  That must be a record right there wtf.

I think I was so tired, I wasn’t really looking and just banged the gate wtf.  I’d planned to go for a massage or something after we completed Colony @ Eco City but never got around to it because more things kept cropping up.  I wasn’t even sleeping well for a few weeks because at night my to do list kept running through my head and I’d worry about what else I needed to complete.

Immediately after that school registration, Fatty and I took the kids to watch Christopher Robin (Thanks Disney for the premiere tickets!).  Through sleep deprived eyes, I saw the movie poster. 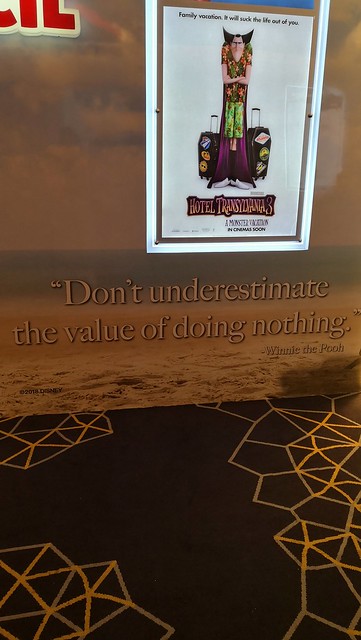 Pooh Bear really is on to something.  As grown ups we forget that and we fill up our free time with maximum things so we feel “productive” and “useful”.

Well fuck that.  I didn’t do nothing and ended up with two car accidents in a day.

Sure we get stuff done, but maybe we would get more done more efficiently if we took a break every now and then.  Never underestimating the value of doing nothing again. 😀 You? *threatening look wtf*