I actually did a search on my old blog posts (wow am I prolific blogger or what) and realized that I never wrote about Fighter and constipation and the reason why I switched the whole family to Mamil.

Fighter has had a problematic stomach ever since he was born until today.  Exactly like the mother -_-

He had no problem when he was solely breastfed.  It was when solids were introduced that the problems started. *cymbals clash*

I started him on veggie and fruit purees and almost immediately, he got constipated. -_-  I assume it was partly cos of solids itself, and partly cos the purees he always wanted was apple and banana.

From then on he struggled on and off with constipation.

No matter how much fruits and vegetables he took, or how much water, every so often he’d go for days without pooping.  When he finally managed to go, the poo would be the size of a monster and frequently streaked with blood. T___T And he’d cry and cry cos hello who wouldn’t!?

Most of the time though, he just wouldn’t be able to go on his own and I used Lactulose so often that I was super familiar with it.  At one point on doctor’s advice, I had him on daily Lactulose for a month. O_O (Lactulose is a type of sugar that helps the stool absorb water so it’s easier pushed out.)

Sometimes the case was too extreme for even Lactulose.  Then I had to resort to suppositories, which are the worst.  It’s instant relief but the problem is holding him down screaming while I stuff a wax pill up his butt. T____T  It was traumatic for me, what more for him.

I must have written about it on social media because I remember followers telling me to try Mamil.  And I happened to see Google Ads about Mamil too! But it seemed too good to be true – milk can help with constipation yau mou. Lolol.

Then one fateful day, Mamil approached me to collaborate.  I was still skeptical honestly, but they gave me a couple of cans to try.

Fighter’s constipation pretty much cleared up after that. (!!!!!!)

That’s why I continued to collaborate with Mamil.  I even worked on a brand video with them last year!  With Penny, I put her on Mamil immediately too without considering any other brand.  As a family, we’ve had no constipation problems since that dark, dark period in Fighter’s early years.

Last week, I attended a talk organized by Mamil about gut health. 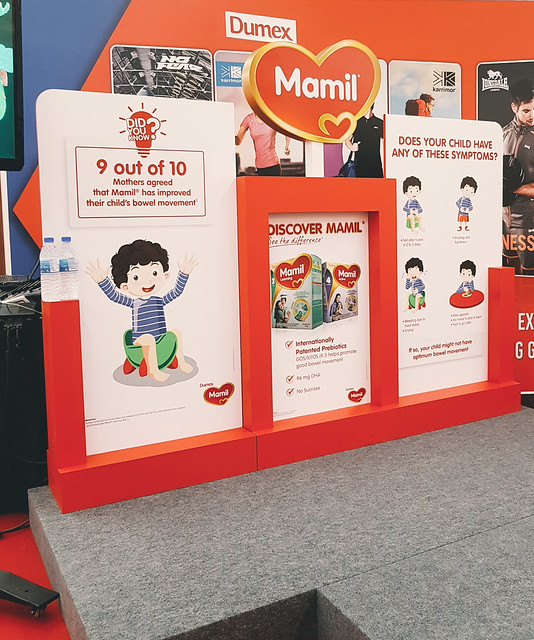 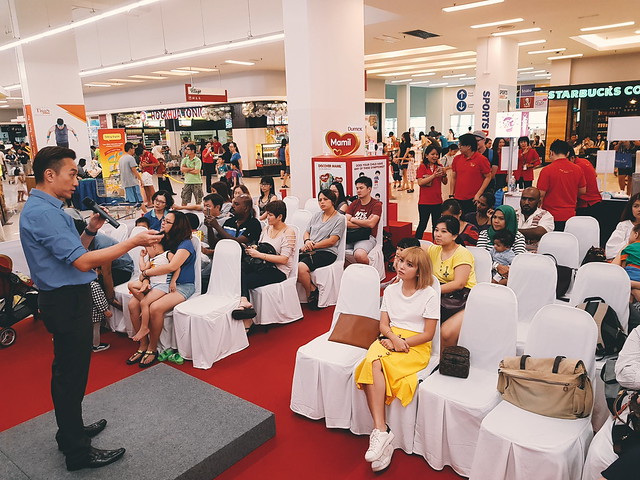 A doctor and a nutritionist headed the talk so it was actually pretty interesting and I learned a lot about gut health!  Gut health is actually pretty important cos besides say our lungs and skin, it’s the body’s first point of contact with the outside world; anything you consume will go into your stomach, so your gut is essentially your first line of defense against outside pathogens.

Anyway um…. if you don’t want to see graphic pictures you might want to skip this next photo. 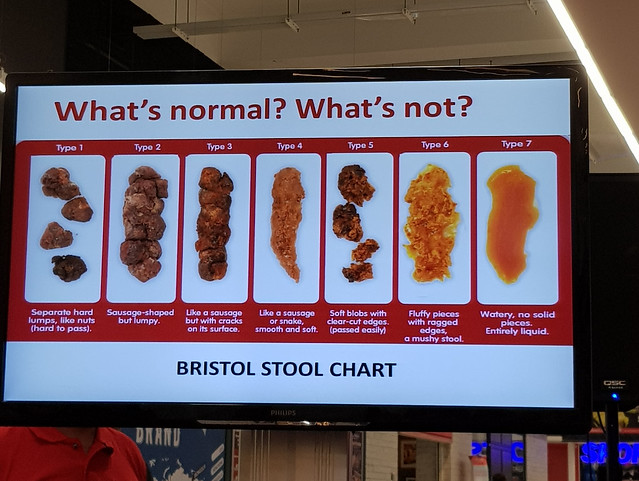 IS YOUR POOP NORMAL?

Seriously this chart is my bible now. T3T  Type 3 and 4 are normal, the others are not. 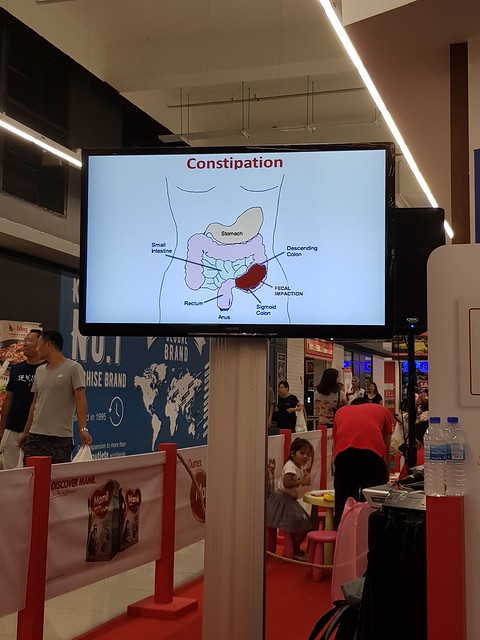 Constipation happens when poop gets stuck in the big intestine and blocks up the passageway.  The longer it stays there, the more water it loses and the harder it gets.

And as is general knowledge, constipation happens for a variety of reasons: not enough water, not enough fiber, slow movement through the digestive system, etc. 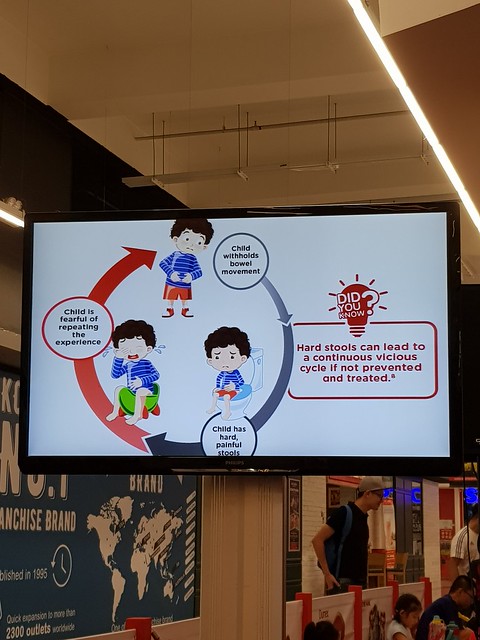 Fighter was too young to tell me so I don’t know if he was actively holding his poop back or not when he had constipation!  But it is totally possible. D: 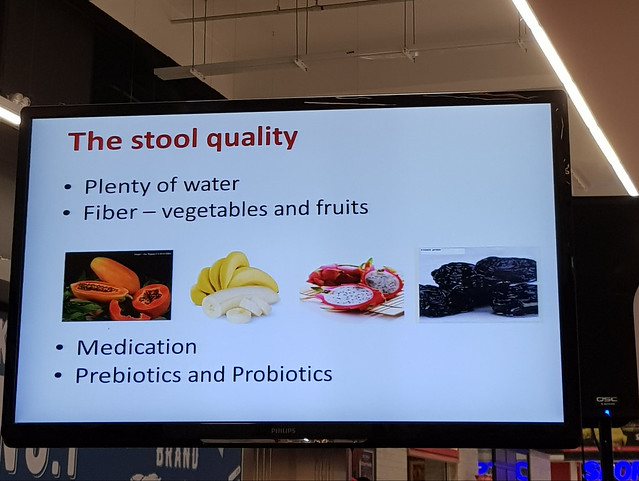 How to improve stool quality for easier pooping. Common sense la – water and veggies and fruits.  But yep, also probiotics and prebiotics.

Everyone knows what probiotics are but what about prebiotics? Honestly I had no idea until I went for this talk lolol.  My phone would auto correct ‘probiotics’ to ‘prebiotics’ and I thought prebiotics was just a made up word LOL. 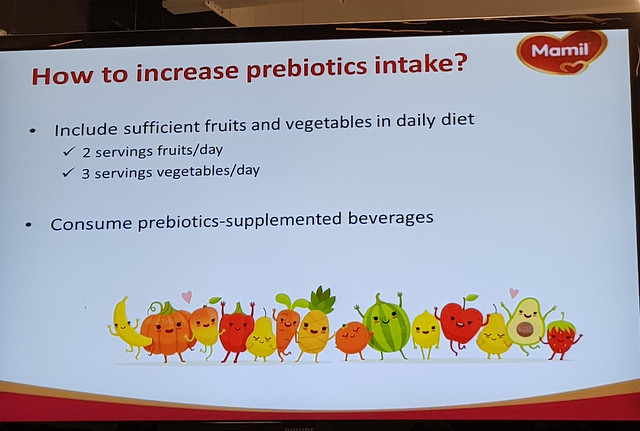 Prebiotics can be found in fruits and vegetables, or supplemented beverages. 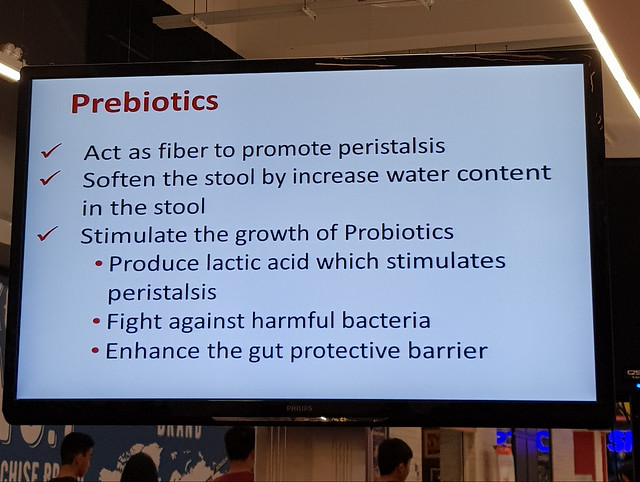 Besides stimulating the growth of Probiotics, prebiotics act as a fiber to promote peristalsis (the movement of intestines to push food on its way), and soften poo. 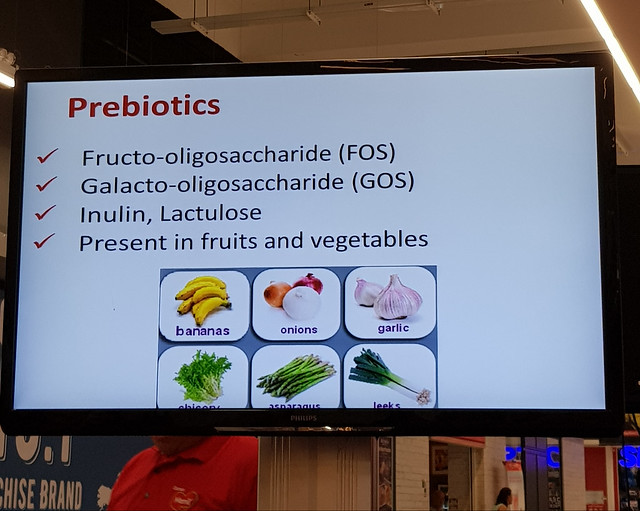 Main prebiotic types are FOS, GOS and Inulin.  I didn’t know Lactulose was a prebiotic until now! 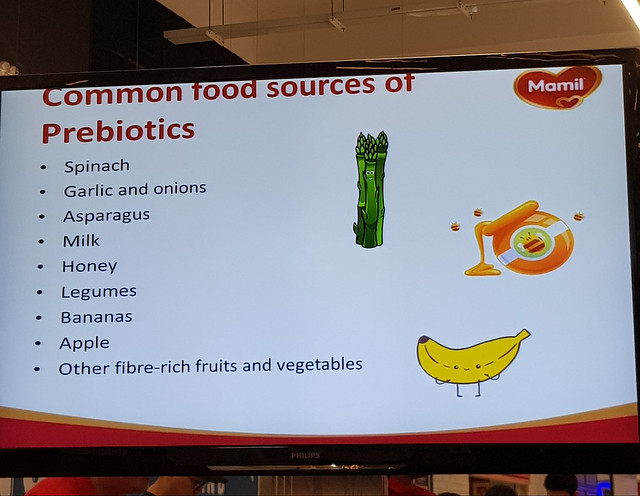 Here are some of the common food sources of prebiotics.  That’s why it’s important for your kids (and you) to have a balanced diet. *nags* 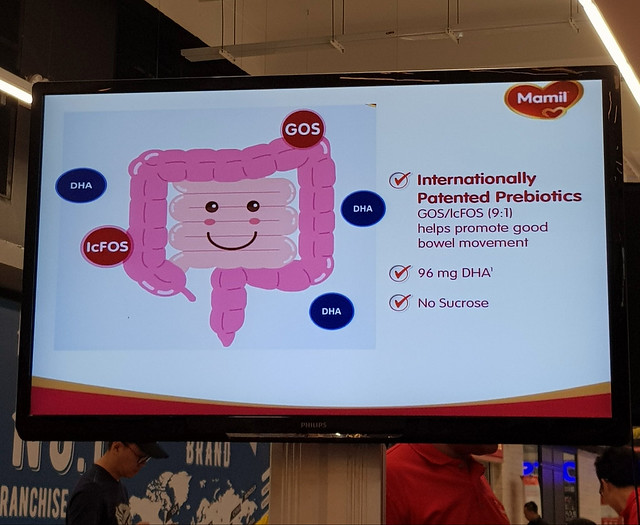 Mamil is fortified with probiotics AND prebiotics – GOS/IcFOS which is all the important prebiotics I mentioned earlier.

I think my kids eat a pretty balanced diet as it is, but maybe not enough good bacteria still.  I think I tend to underemphasize rather than exaggerate, so I’m being completely honest when I say that Mamil really helped my kids with their constipation. T____T

Mamil cited a survey that said 9/10 of moms vouch for Mamil and I’m one of them for sure hahaha.

The problem is, nearly a year ago, Fighter actually switched to fresh milk supplemented by two scoops of another formula brand that’s associated with weight gain.  A doctor suggested doing that to help with his growth.  Meanwhile, Penny is firmly still on Mamil.

I didn’t notice it right away, but now Fighter’s poop fluctuates.  Sometimes it’s normal, but sometimes it’s type 5 or type 2 (not normal).  And sometimes he gets stomach pains and poops up to three times a day wtf.  He didn’t have this problem and I suspect it’s cos his prebiotics intake has decreased cos he switched milks.

He overheard me talking about this and asked me to buy him Mamil lolol.  I will probably do that when we finish our current supply actually. 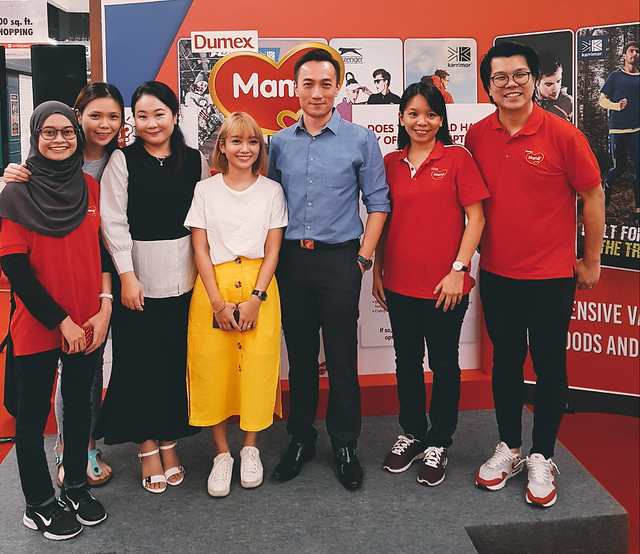 With the Mamil peeps and experts.  Thank you for saving us lots of pain and crying. T______T