Is it this blog becomes active when I get worked up over something wtf.

This will be an AudVerbalDiarrhea post ok guys bear with me.

This is literally a sequel to this post: To the mom judging another mom, please stop.

TL;DR: When Penny contracted Hand Foot & Mouth Disease last year, I unthinkingly brought her out to a toy store to cheer her up.  I didn’t think it would do any harm cos she was in her stroller.  I received a lot of flak for it and considered it from all aspects.  I openly admitted my mistake and made a public apology on my Instagram.  That didn’t stop the judgment though.  Parents and non-parents went on and on berating me.  I won’t go into the details; you can read about it at the above link.

Here’s the story of what happened the last few days.

So we’ve been having a slightly tough time at home.  Three weeks ago, Fighter caught Influenza B and was quarantined at home for a week.  I kept Penny back a few days too to make sure she didn’t develop any symptoms before I sent her back to school.  The next week, Penny herself fell ill, with suspected  chicken pox.  I say suspected cos she’s had her chicken pox vaccination (as has Fighter), so her symptoms were extremely mild, until the doctor couldn’t confirm it was chicken pox wtf.  She developed a few spots on her face, and that was it.  No fever, no itching, no blisters.  She remained her normal self, active, ate a lot, but I kept her home from school anyway.

The doctor told me to look out if the blisters come, a sure sign of chicken pox, but she didn’t even get any blisters.  He told me that once the spots dry up and heal, she’s no longer contagious.  She didn’t even have blisters so nothing to dry up also wtf.  The spots merely faded away and I waited until only small brown scars remained.

At first I thought she would miss her first ballet recital and informed the teacher.  But her spots fully healed in time so we made it!

I posted a photo of the four of us at her concert with the caption “Chicken pox, influenza and hives ain’t gonna stop us” as a joke.  (Hives cos I think I was too stressed out by work and them being sick (and a possible allergy from Colony reno sites) that I broke out a few days prior.)

Apparently my photo went viral on whatsapp and parenting FB groups in Singapore.  Malaysia maybe got also but I didn’t hear anything.  I suddenly had a lot of followers DMing me to tell me I might want to clarify myself.

Here’s the photo that started it all wtf.  Or one of those la.

Weiqi Vivien started a fire out of ashes lol.  I applaud her back. 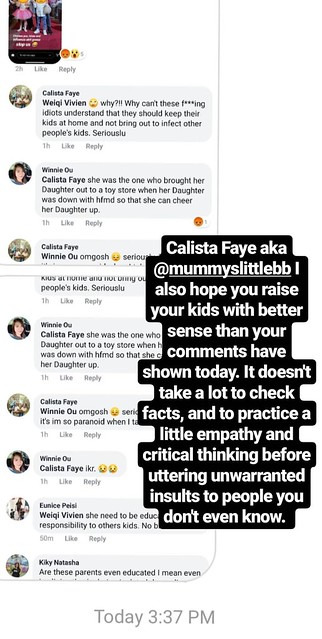 Calista Faye called me a fucking idiot. *poker face*  Winnie Ou reminded the group that I once brought Penny out when she was sick.  I guess once a criminal, always a criminal huh. 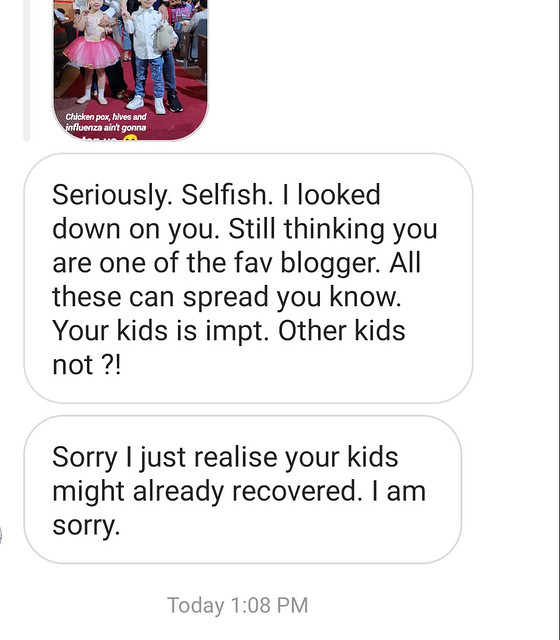 From favorite blogger become a zero wtf.  This person also whacked me before catching herself.  But kudos she apologized for it.

I guess my caption was a bit misleading, if you weren’t following my earlier stories and didn’t see that the kids had already recovered and Fighter had been back at school for a week even. 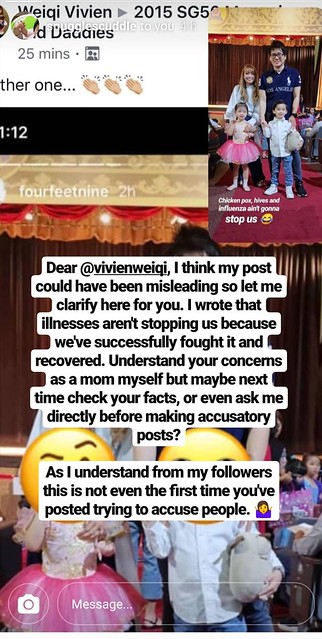 So I wrote back.

But I was also pretty angry that I had to clarify this to people who aren’t even following me and don’t know me at all.  I had a lot of people messaging me to ask if my kids were still sick and I wrote replies to explain, one by one.  They didn’t jump to conclusions, they checked with me.  But these people who didn’t bother to check with me or find out the story?  They just went ahead and posted my photo for all to see, with judgmental statements and insults. 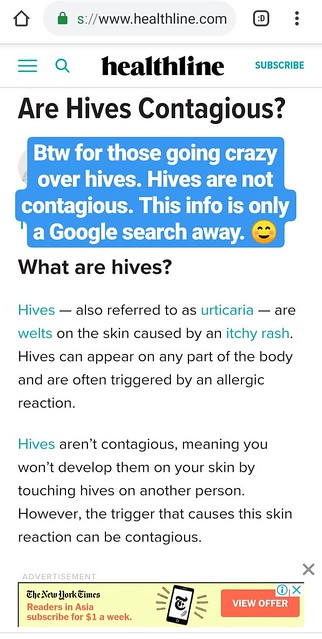 Hazel Lian-Tan, this is for you.  Never thought there would be a day where I’d have to say: hives are not contagious. 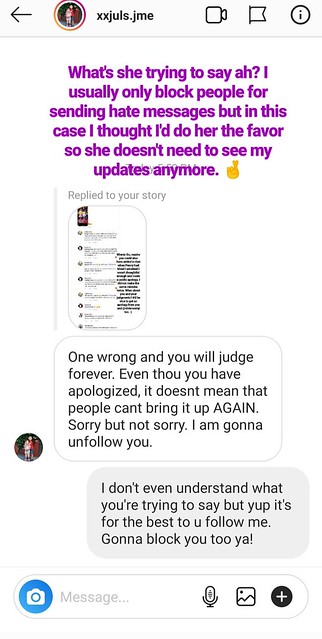 And then I got this indecipherable lump of cactus wtf.  I don’t know who or what she’s talking about!  Is she talking about those people who judged me?  Or me for scolding people?  I couldn’t brain honestly and blocked her with relief wtf.

A lot of people asked if I would share if those three ladies apologized to me and I said I would.  Because it takes a huge effort to understand when you’re wrong, and apologize, and I wanted to give them that credit.

Vivien actually had the most sincere apology.  I wasn’t that exemplary also la to be fair, cos I also wrote that I heard she simply accuse people before me.  I do take it back.

I’m not sure why Winnie thinks she wasn’t judging when she clearly brought up my past mistake in regards to this post which is a super judgmental move imho.  It’s like something goes missing, and there’s a repented robber in the room and you say, “YEA HE DID IT AGAIN FOR SURE! HE STOLE SOMETHING BEFORE!” But ok hahaha.

She totally did not have a clue what was going on at all.

She basically said sorry if I felt offended (which etiquette experts don’t count as a proper apology).  I was ok la,  sorry is a sorry wtf.  But then she went on to defend her stance which nobody is disputing, nor does it justify why she felt she could be so rude and judgmental in her comment.  Then after that, she still not aware that my kids are not even sick and say she hopes I just “used the wrong choice of words”. Why did she apologize then if she doesn’t know “there is more to what I posted”?!

I very shocked by her at this point, but I didn’t want to continue arguing on her level so I let it go.

Then today I received this DM, which is the catalyst for this blog post. Wow.  Just wow.

I guess in the eyes of all these women, really once a sinner always a sinner.  It didn’t matter how careful I was this time, checking with the doctor when it was safe for them to return to public, or that I even kept Penny who didn’t have the flu, from school until I was sure she would not develop it in the next few days and infect her classmates.  The most important takeaway it seems, is that I took my sick child out before.

Is motherhood now a competition and I’m the last person to find out?  Is the goal now to be the most perfect mother, who never makes a mistake, whose main goal is to keep her children safe from disease, screw you all other disease laden fuckers?

Look.  I have been on both sides of the fence.  I have unthinkingly taken a sick child out to cheer her up, thinking that it wouldn’t matter, it was a minimal risk.  I  have also pulled my children out of class when I heard one of their classmates broke quarantine and returned to school contagious.

I know what it feels like to nurse a sick child.  It is painful and draining for everybody.  I think every parent knows this.  And ideally, if everyone could, we would just keep our sick kids at home to recover.  I wish people wouldn’t take sick kids out of course, and if I knew that because of me, Penny had inadvertently infected another person I would regret it so much.

But i also know it still happens.  For a variety of reasons.  When I mentioned “resources” in my earlier reply, I wasn’t talking about myself.  I meant that not everybody has the same privileged position as us to make that call.

I’m not saying sure, bring out your sick kids and let’s have a party.  I’m not saying you cannot be angry if you know a mom purposefully brings a sick kid out and infects yours.  That’s what all these detractors can’t seem to get into their skulls.  I’m merely saying, have a little empathy.  Because it doesn’t mean every time that happens, someone is just being inconsiderate, or selfish, or irresponsible.  Of course, there are people like that.  But would it take very much effort if you would just take a step back and try to understand what happened and why?  Ask some questions (kindly) and get a sense of the situation before you judge someone’s actions and start bitching?

When the Penny HFMD thing happened, other than those nasties who attacked me, I did also have people write to me with compassion to tell me I was wrong.  Because they were kind, I did not react defensively and was able to listen and accept their views.  If you’re telling me that your angry exposes are meant to educate, isn’t this a kinder and more effective way of educating others?

Calista stands by her stance.  I stand by mine too.  That empathy goes both ways.  It’s terrible having a sick child and understandably it feels better to blame someone.  But the other mom probably is having a terrible time too. It’s fine to educate and get angry and take steps to prevent bad things from happening, but you don’t have to be mean or self righteous about it.  Have you never made a mistake in your life?

It’s this lack of empathy exhibited by these individuals that really bothers me.  Empathy is the quality that makes a person not self centered.  I want my kids to be healthy and safe.  But equally, the quality I want them to grow into most is the ability to empathize with others and be kind.  If we don’t practice that ourselves, you really think our kids will?