Okay la he’s been six for a month now so I’m obviously very late wtf. But I want to blog about his birthday party cos I ownself think it’s very creative! No thanks to me wtf.

So for months before, Fighter had been asking me for a birthday party. I layan only cos it was months away and I thought he might eventually forget about it.  I damn lazy organize a party la ok hahahaha.

But no!  Three weeks before his birthday he was still narrating to me details about his dream party wtf.  He even decided on the theme, which was Roblox, an online gaming platform he’s obsessed with.  The games are user created so there are like hundreds and you just choose which game to enter and play.  (Apparently it’s something like Minecraft but I wouldn’t know, having never played either wtf.)

So in a mild panic, I called up the resources I had at hand wtf.  Luckily I’ve been a mom for six years now so I have some contacts already.  (Mom life hack: keep the number of every single baker, party planner, clown, magician, caterer you come across in your life wtf)

We already launched Colony Star Boulevard recently so woot free venue!  No brainer really.  Naturally I got the catering from Define.Food who gave us extraordinarily yummy food for a kids’ party lol.

And for entertainment, I hired our phonics and reading teacher, Minn.  She’s @sieuminnn on Instagram if you wanna look her up and on the side, she organizes party activities for children.  For Penny’s 4th birthday earlier this year, we had a Moana themed party.  Her friends are mostly three to four year olds, so Minn planned different stations of hands on and sensory play – from catching fish, to making blue slime, to sensory play with blue jelly.  Her friends’ older siblings also played for hours!  It basically kept the kids occupied, the parents relaxed, and I think it was a much better investment than a clown or magician who performs for half an hour. :X

Anyway for Fighter’s Roblox party I told Minn that his favorite game was called Natural Disaster Survival where duh you run around the city and avoid natural disasters wtf.  He likes those kind of things la!  He’s very interested in natural disasters and cities so it was no wonder wtf.

So Minn came up with such ingenious ideas that combined all his interests! Her main idea was that an hour before guests arrive, the party would already start for Fighter and Penny.  Because together, they would “build a city” before his friends came, which would encompass the city part.  Then when his friends got here, they would all then act as “natural disasters” as called out by Minn – hurricanes, tornados, tsunamis, earthquakes – and destroy the city together hahahaha.

I loved the idea because not only would the kids be learning about erm natural disasters, they’d also be working together to rebuild the city afterwards, and they got to expend their energy in a fun and creative way knocking down the city!

Hired a balloon specialist to put up some balloons and signs!

Roblox cake from Patisserie Rui in Mont Kiara.  F*ck fondant cakes la I always go for cream now cos fondant may look good but it’s so disgusting and there’s always so much wastage!  Rui did such a good job with this Roblox butter cream cake.

So this was an hour before the party.  Minn spent weeks collecting old cardboard boxes to be used to build the city.  So we spent an hour assembling boxes so Fighter could plan and build his city.

Penny’s one.  Not as meticulous lol. 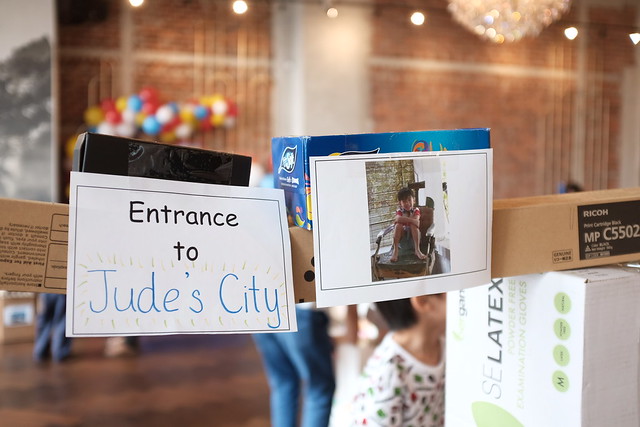 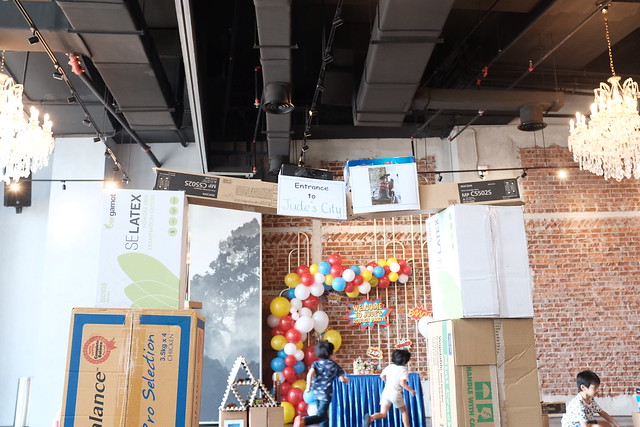 Both of them even built an entrance to Jude City!

Each building was labeled with a name too: school, office, condominium, hospital, and so on.  Fighter and Penny created the buildings based on what they imagined each building type would look like.

Besides that, we had a Roblox avatar making station.  Before starting, kids could make their own avatars using satay sticks, marshmallows and candy. 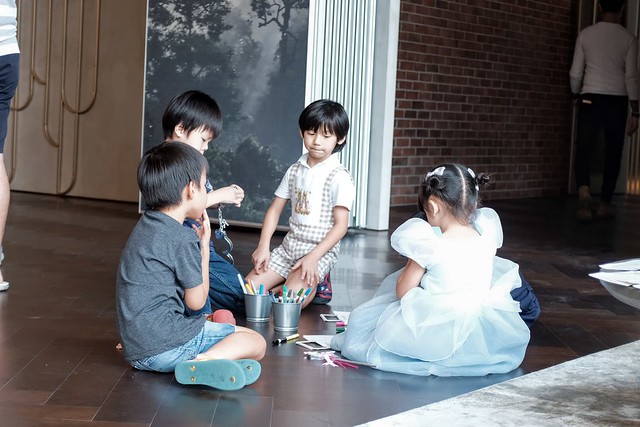 And we also prepared a Goodie Bag Design station – for children to draw and name their own goodie bags…. 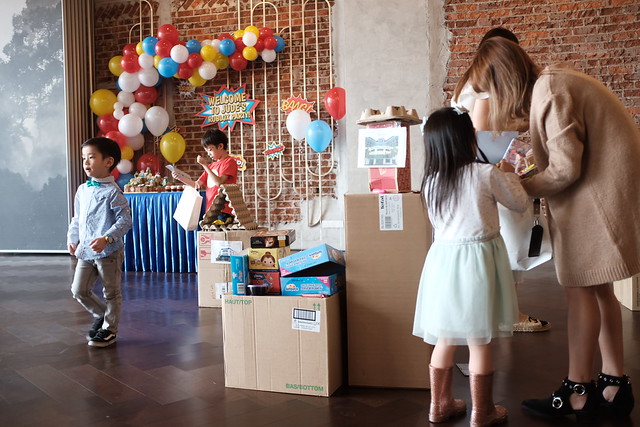 Because prior to that, we’d hidden little goodies and snacks all around the city for the kids to find!  Minn prepared a list of goodies that they’d have to find and they could keep all those in their bags. 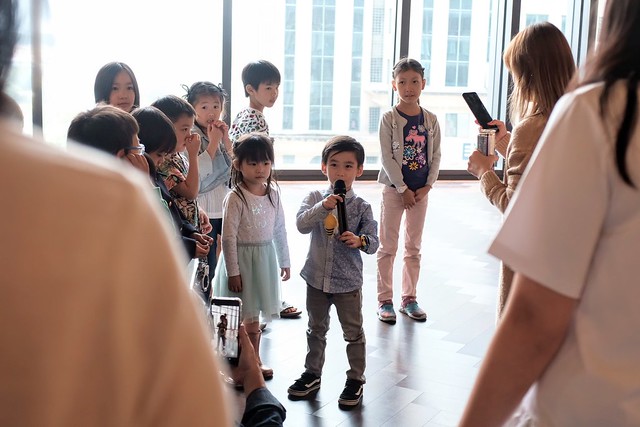 Fighter welcoming his friends to his party with a speech.  He really not shy ah I love it! 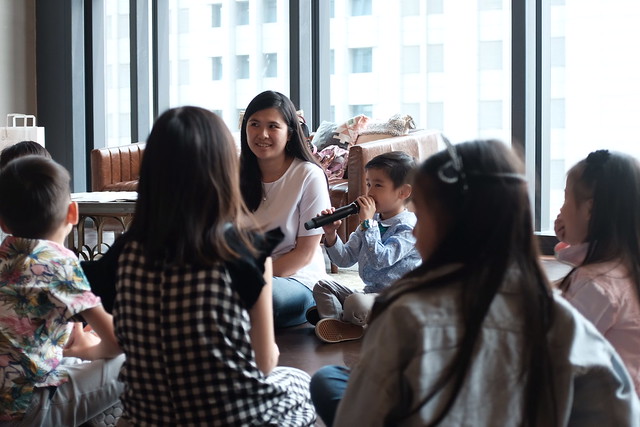 Explaining the rules of the games to his friends. 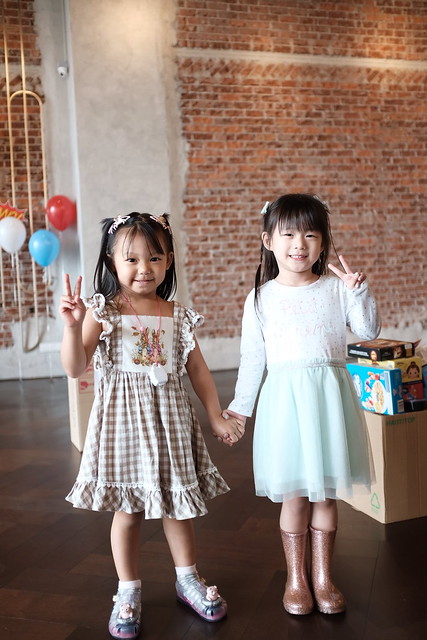 Penny and her friend Kiesha hehehe.  They were classmates last year but got separated this year cos Penny changed schools.  Reunited again next year though for kindergarten! 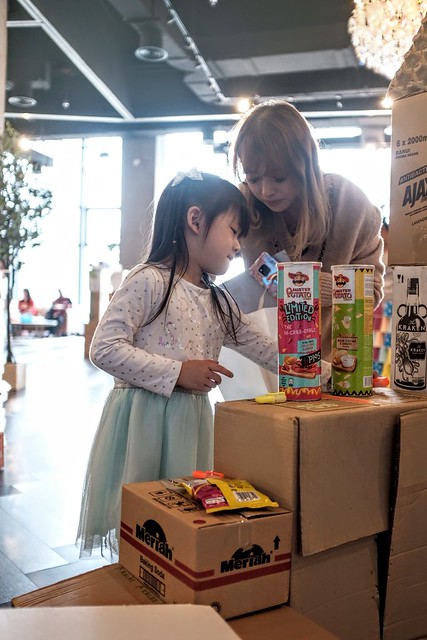 Searching for her goodies. 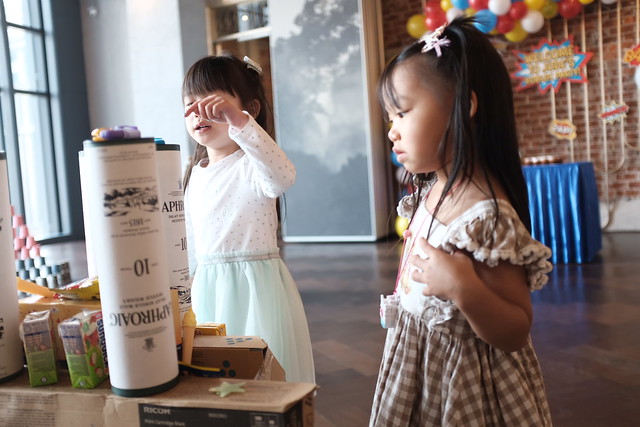 And telling her friend where to get the good stuff hahaha. 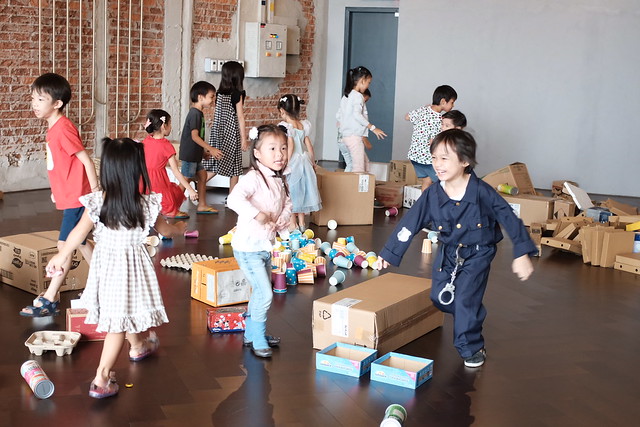 And then it was city destroying time! 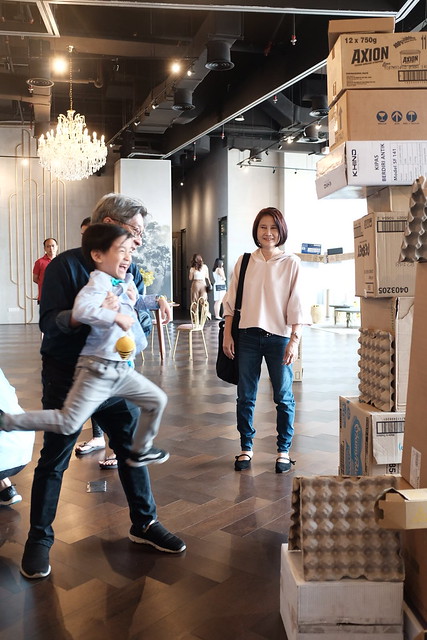 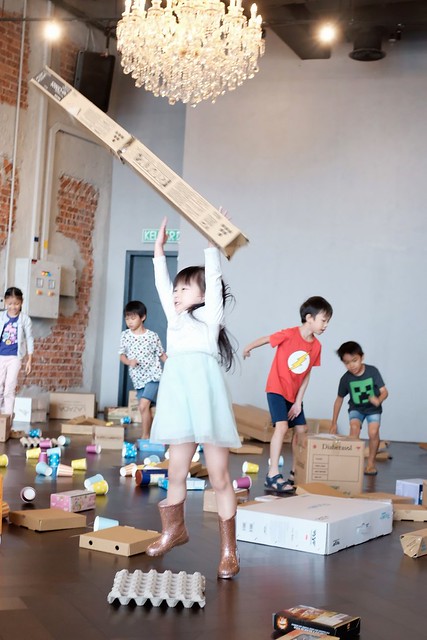 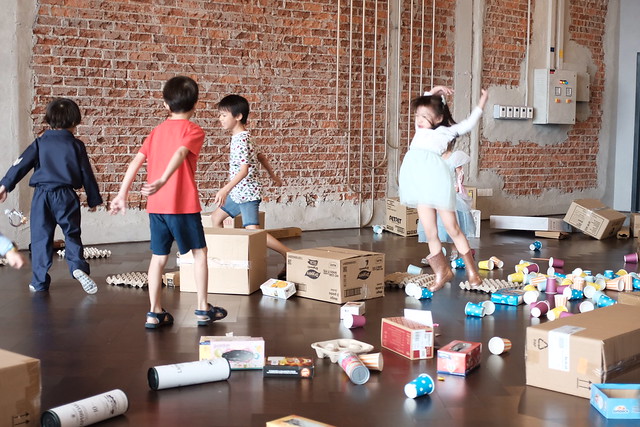 Why she going all Street Fighter hahahahaa. 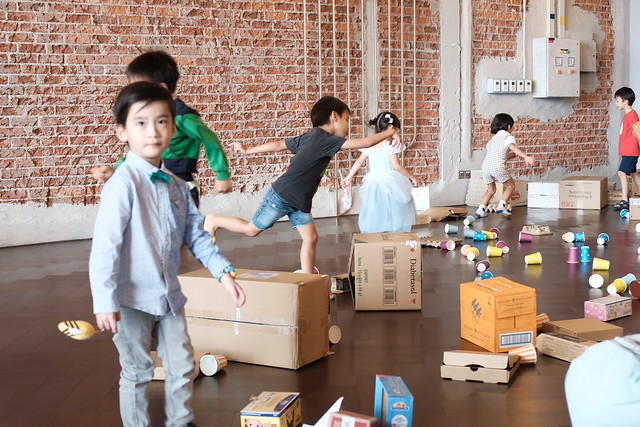 Hahahah the kids had SO much fun pretending to be disasters. 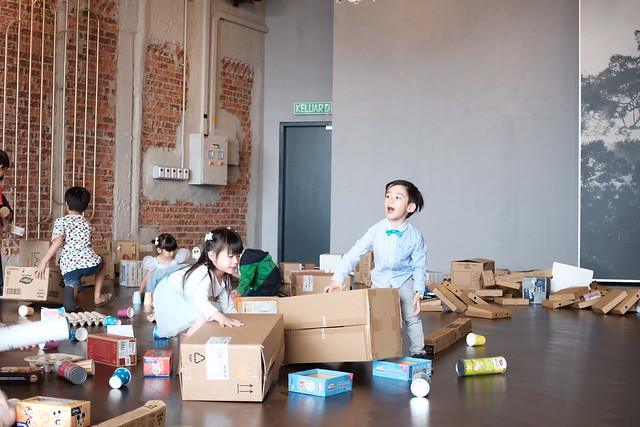 After that they had to rebuild for the next round… 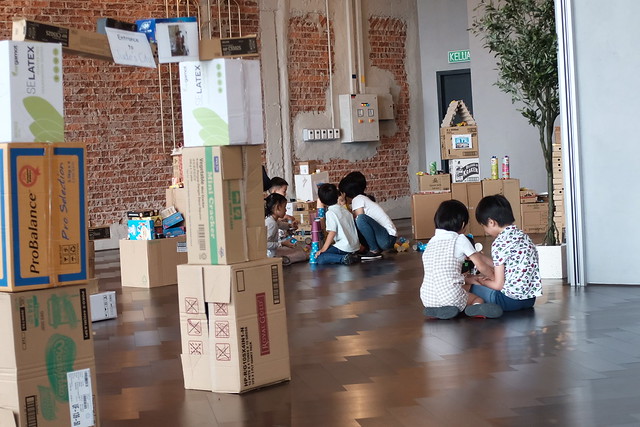 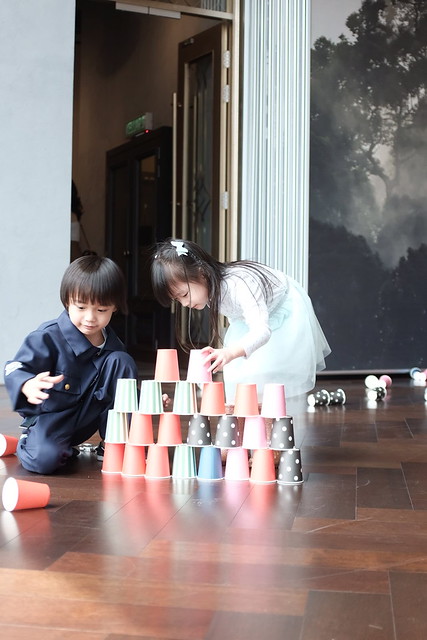 To produce way more impressive structures than we adults could have. 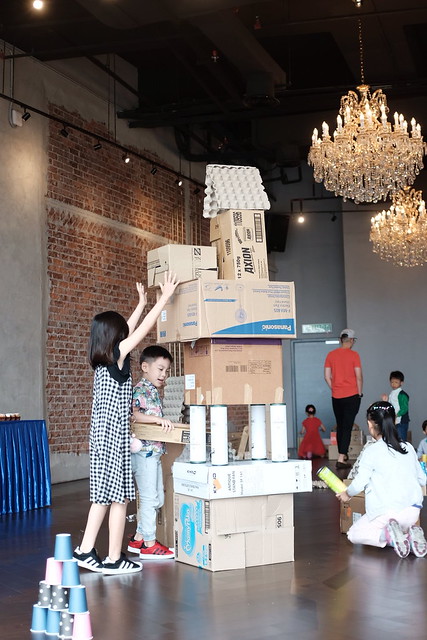 And after they’d set up a new city, they knocked everything down again.  Repeat 1000 and they had a blast every time! 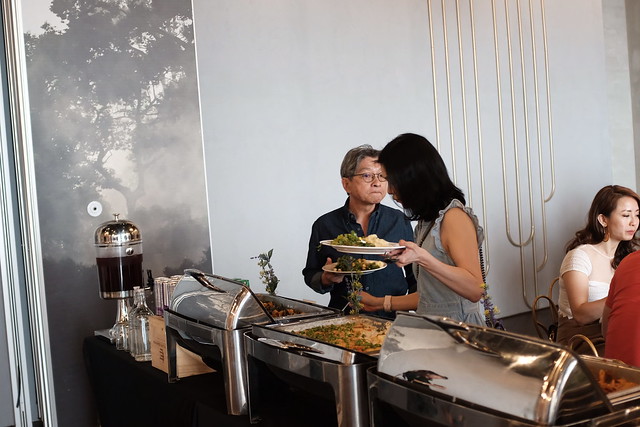 While the grown ups indulged in Define.Food‘s buffet! 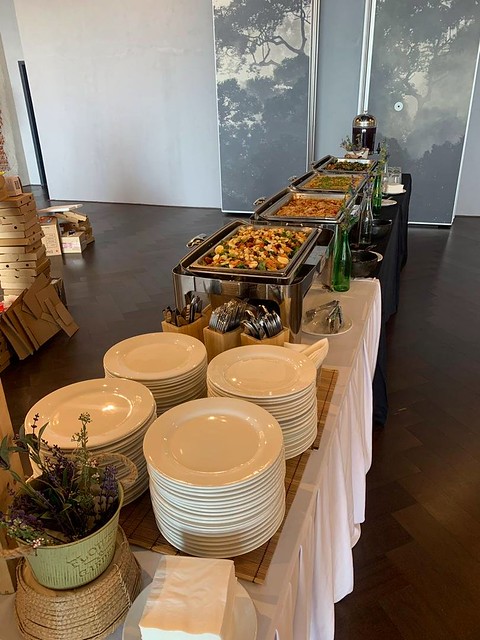 They did an all new menu for us and it was so good omg. Creamy chicken potato pie, Salmon kale salad, Honey mustard, Penne wagyu bolognese and Oriental baked white fish.  I didn’t have the penne cos it’s beef but I heard really good feedback on everything!  Even the kale salad was good dude. Kale wtf.

So you know, if you’re considering throwing a party at Star Boulevard (we take bookings!) you know the food is gonna be good hehehe. 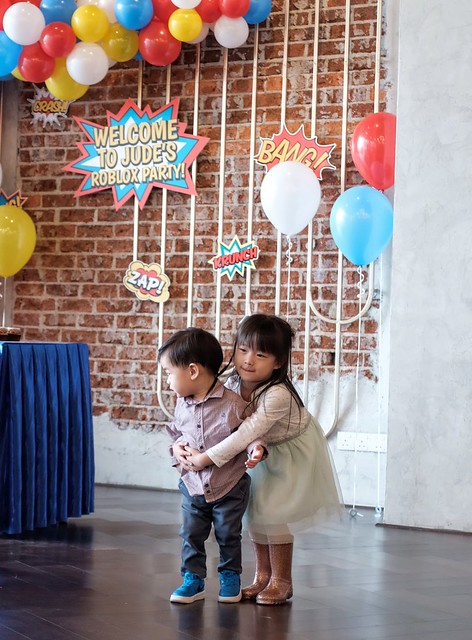 Penny and their baby cousin.  She loves babies and she carts him around like he’s her baby doll hahaha. 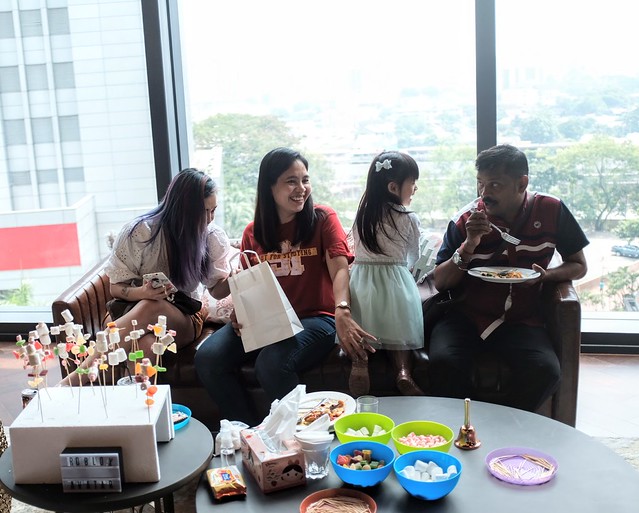 On the left is Uncle Nantha, our company driver and dispatch.  Penny loves him and calls him her Baby FHL hahahahaha. 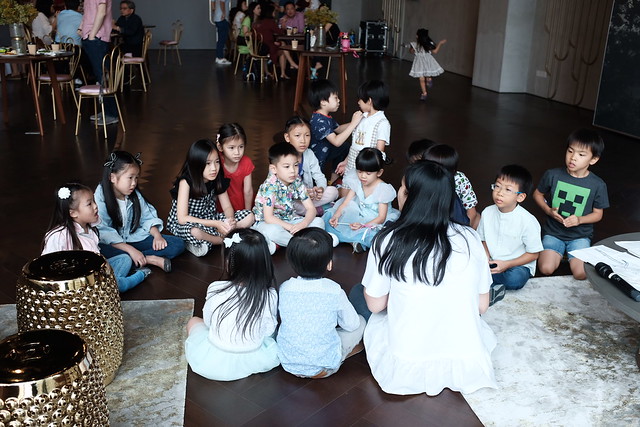 All these lovely children. <3

When you cannot reach, all you gotta do is ask for a hand hehe.  I’m posting a lot of pictures of the kids building cos we grown ups were really fascinated with the kids’ tenacity in building (and destroying wtf) and creativity. 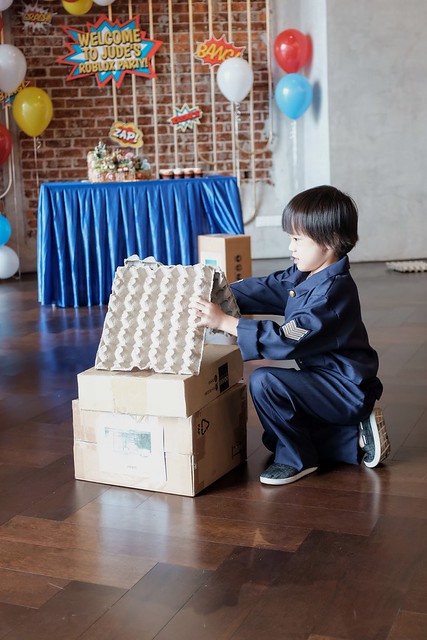 Tired from building and destroying hahaha.

These four are very proud of their creation hahaha. 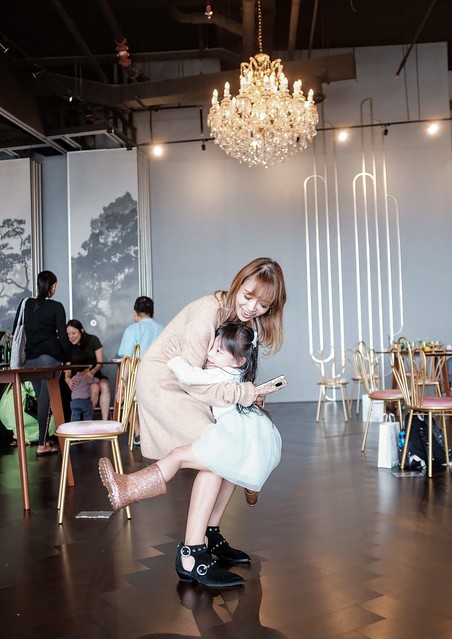 Mochi is still a mochi. 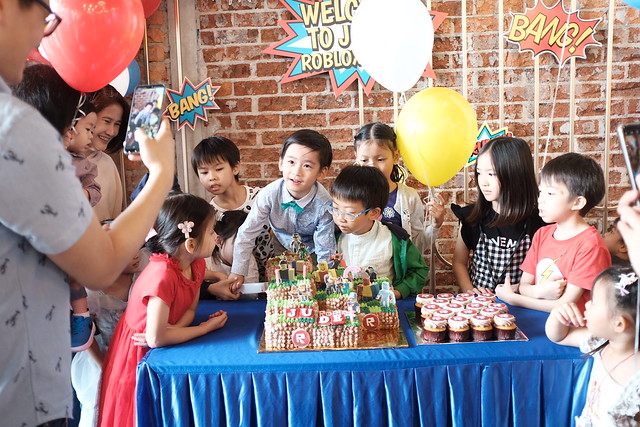 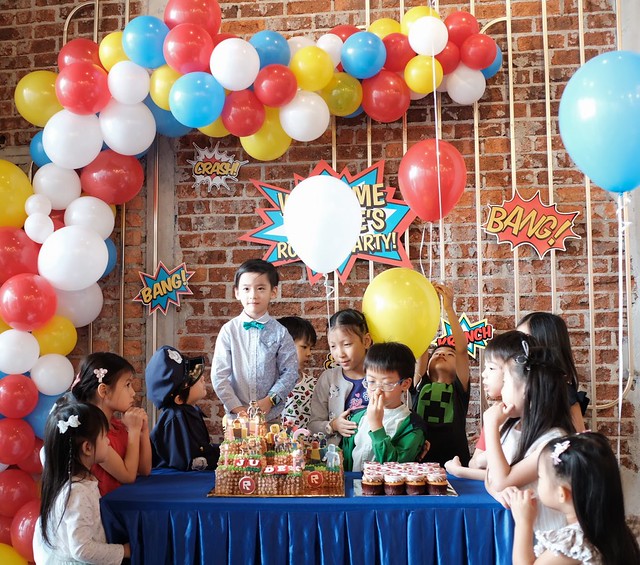 Every day that passes you get smarter and smarter and slightly more annoying cos you know how to debate and I cannot brush you off anymore wtf. Hahahaha kidding!  You amaze us every day with what you know, while your personality continues to be compassionate and loving.  It’s a pleasure being your mommy. 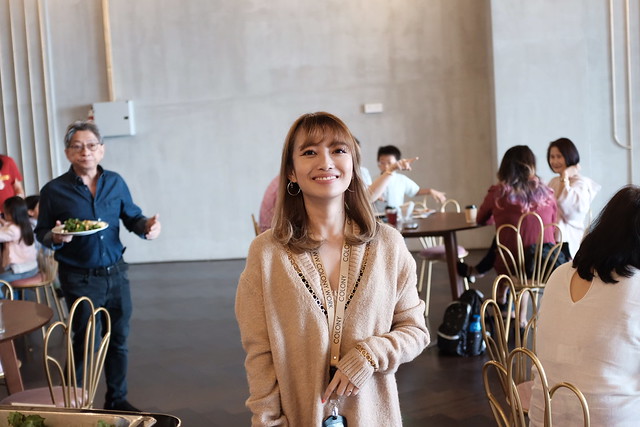 Here!  Remember how much you love me now in five years time when you become a teenager and start throwing teenager tantrums LOL.

[Oh yea I’m not just saying this cos Colony is our company, but our event spaces are perfect for parties – birthdays, baby showers, bridal showers, etc. Star Boulevard is especially so cos Define Food is right there as an available caterer, and their food is consistently yummy.  So if you’re looking for a private party space, leave a comment, DM me on Instagram or email or just head to colony.work to enquire!]