Nearly wasn’t gonna blog about this but I need to!  In fifty years, my goldfish memory will thank me wtf.

So the kids have started school since the 6th of January.  First morning was a mix of excitement, apprehension and nerves…. for all of us!  Yes even Mommy wtf.

The next two years are going to be horrible for school runs cos they’re in different schools! Here’s my routine:

It’s horrible congested with parents and their cars so instead of sending Penny home after I pick her up and driving out again, I’ve decided to just pick Penny up from school, drive over to Fighter’s school to get a good parking spot, and just wait for him to finish.  We hang out in the car, I stock it with snacks in case she’s hungry and prepared a lot of Disney movies to watch on our car TV hahaha.  We usually wait an hour but it’s less stressful and less driving time for me.

In the main hall before they disperse to their respective classrooms. Still all smiles~ 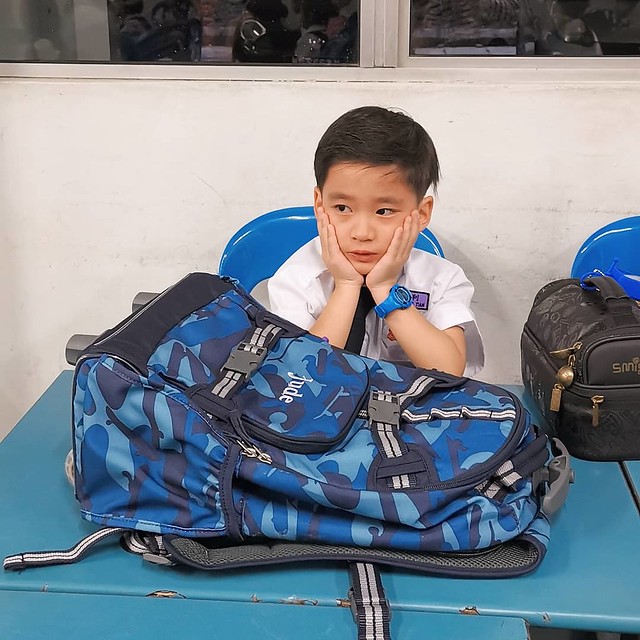 But once enter the classroom he started getting nervous and eyes turned red lolol.  I can imagine how nervous he was though, sitting in a new classroom with new kids around him waiting for a strange teacher.  The reason why he was reluctant to leave kindergarten was cos he wanted his old teacher, and I know how important teachers are to kids this age!

In fact, the whole class was unusually quiet for a group of six and seven year olds!  I think all of them must have been very nervous poor things hahahaha.

On the first day they allowed the parents to stick around and check on the kids at recess.  I signed Fighter up for school meal plans so he would have a reserved seat.  It was muffins and Milo that day so he was very happy hahahaha.

It helped that Fighter’s kindergarten friends’ mothers and I booked the whole table together so they could sit with their old friends!  Fighter was delighted and exclaimed, “Mommy I got to see all my old friends!”

He got to see his girlfriend SY (who’s in a different class this year) too hahahaha.  She saw him when school ended and dragged her mother over so she could say hi to him hahahaha.

(Oh ya let me say that I think I wracked up don’t know how many kilometers that day wtf.  After I dropped Fighter off at school, I took Penny to her school.  Made sure she was ok, then turned back round to Fighter’s school for a parents’ orientation talk.  Then I waited to check on Fighter at recess.  Then I rushed back to Penny’s school to take her home.  And then drove back to Fighter’s to pick him up. I should be an Uber driver wtf.)

At the end of the first day I asked him how it was.  He came back a bit red eyed because apparently he wanted to go to the toilet after recess and his English teacher gave him an “angry look” wtf.  And he said she’s like “CCTV cos she stands outside the class and stares inside” WTF.

Two days later though, he announced, “Me and the English teacher are getting on better” hahahahaha as if they were in a fight like that!  Cos apparently she’s been playing games with them in class so she’s in everyone’s good books now wtf.  And he said “Time passes so fast now school doesn’t feel that long anymore.” Which I take as a very good sign cos time flies when you’re having fun right!?

I got a call from a strange number one morning.  Picked up and it was Fighter’s teacher, Mrs P calling to tell me Fighter fell down on the way to the canteen (why am I not surprised wtf) but he’s okay and they’re putting medicine on his leg and he’s fine to continue at school.

I asked him when he came home and he told me he was fine too!  He said he didn’t even cry, although there were tears in his eyes hahahaha.  And that Mrs P said he was very brave.  I was surprised and asked him, did she say it in English or Chinese?  He said Chinese, and I was even more surprised – does he know the Chinese word for brave?  Cos that’s not a super basic word, in fact I can’t even remember how to say it in Hokkien wtf.  He said yes, it’s yong gan and I was suitably impressed wtf.  I went, “Wow you know the word for ‘brave’?” He was all casual and said, “Yea I heard someone say it a few years ago” wtf my son I am in aweeeeee.

He also happily told me they were playing word games during Malay class where the teacher wrote words with blanks and the kids had to fill in the blanks correctly.  And Fighter got “segi tiga” correct and won points for the boys to beat the girls LOL 20 points to 10 ok hahaha. 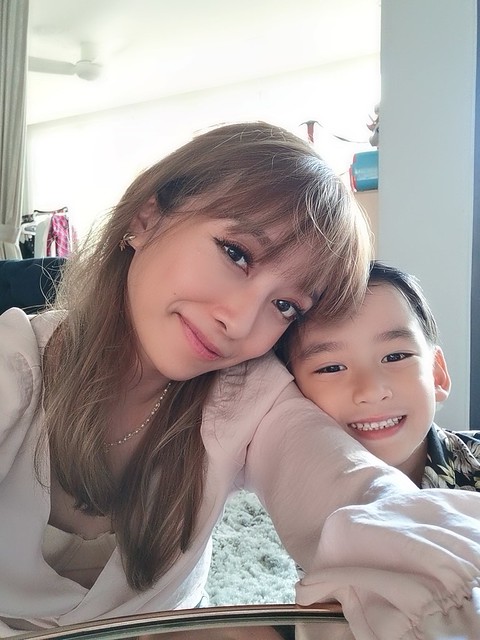 I’m so happy that he’s off to a good start!  And also very impressed that the class teacher was caring enough to call me and update me!  This is normal in kindy but I completely did not expect it in public primary school.

During another talk, the school also told us that not only there will be no exams for the first 3 years (as per the education ministry’s directive) but they also intend to focus not on rote memorization but in teaching the kids how to think and to develop their characters.  I’m really very pleased!  Cross fingers Fighter will do well.

And that was our first week of school!