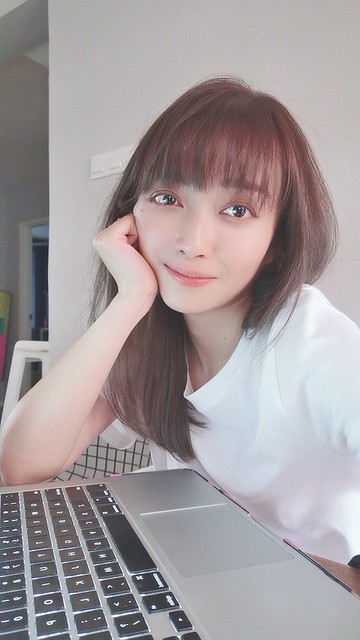 (lockdown look: no lashes and no contact lenses wtf)

So I got several suggestions on Instagram that I blog about life during our MCO (Movement Control Order or lockdown in Malaysia) and yea I really should, if only to document how we spend our days.

So the MCO  in Malaysia has been going on for a little more than two months now.  To be technical, we are on CMCO orders at the moment (Conditional Movement Control Order) so some minimal movement is now allowed and going back to work (in certain sectors) is also allowed!

My days haven’t changed that much though besides occasionally popping in to office when I need to.  And that’s cos school hasn’t restarted and the kids are still home.  Which I’m sure is the case for most parents hahahaah hope you guys are keeping safe and allowed some work flexibility!

In the morning, the kids wake us up by running into our bedroom, jumping on the bed, slapping us around a bit and yelling in our ears wtf.  Cos it’s time for breakfast!

We head downstairs blearily.  Fatty and I don’t eat breakfast because er intermittent fasting wtf.  So breakfast is usually us sitting down as a family and talking while the kids eat their breakfast.  I also nag a bit to make sure they finish their breakfast, milk and supplements.

After breakfast I look at the fridge and think of what to tell Sasi to make for lunch wtf.  We usually eat very simple for lunch – either one pot meals, or sandwiches or easily assembled food. 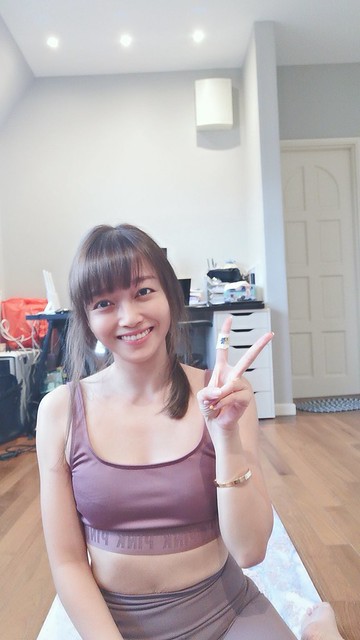 Then I go essersai!  I got a lot of questions about my exercise routine too (wowowowow I don’t know this person talking about exercise on her blog). I made it a point to workout every day mostly cos I was very worried I’d lose my stamina that I’d built from spin classes!  I still lost my leg stamina la hahaha but that’s another story.

I alternate between some form of cardio or HIIT one day, and either yoga or pilates the next.  My logic is that I can do HIIT one day then stretch out the next.  Also I only wanna wash my hair every 2 days so I’ll wash my hair after HIIT but not after yoga LOL.

Before I bought my indoor bike, I followed some IG accounts for Tabata or HIIT stuff for a while but then got hooked on shadow boxing from Tribe.  I used to go here but stopped cos er I terminated my Classpass wtf.  And for yoga and pilates stuff I subscribe to The Flow.  But now I have my bike I just spin every other day.

After my workout is done, I’ll go and shower and freshen up.  At this point the kids would also have showered and started on their usual day of play wtf.  They’ve been playing Barbie house and doll houses for two months straight already who said kids have no attention span wtf.

Then we have lunch!

After lunch, it’s learning time wtf.  We do a variety of stuff actually.  We’ll check Google Classroom to see if Fighter’s teachers have uploaded any new homework.  Sometimes we do worksheets assigned from school; if we’ve finished, sometimes if they’re in the mood I can coax them into doing some pages from workbooks I’ve bought or printables I printed.

If not, we do art projects or science experiments!  We also play a lot of games that are hopefully educational, eg counting games or Pictionary.  Even board games like Monopoly counts as learning to me hahahaha.  Cos they learn about math and strategy what wtf.

We also bake in the afternoons!  This is if they have no Zoom classes.  If we finish early they might go downstairs to cycle, or watch TV or do iPad time.  Then I have time to check emails, do some work, play some Candy Crush, update IG, practice ukelele wtf.

Since I don’t cook Nancy would be cooking whatever I planned and I’ll just kepoh her in the kitchen as well lol.

Then we have dinner.

We never used to but during MCO we set a rule that dinner time is family time, where we sit down and eat as a family.  When there was school, the kids slept earlier so they ate dinner earlier than us and we never had family dinners besides weekends when we go out.  But now with no school and no social dinners for us adults, we have dinner together and it’s actually been very nice!  The kids are at the age where we can have proper discussions and it’s fun la.  It feels like our relationship with them is moving into a slightly different dimension.  They’re not just babies to be taken care of and spoken to, but real little people with opinions and ideas and different experiences from me.  It’s fascinating.

After dinner I open Tiktok and we watch together for a bit LOL omg sounds so loser hahahaha.  Then we might call the grandparents to wish them goodnight, and wash up for bed.  I read them a story each so they both can choose their own books.  They drink their milk, I turn off the lights and I’m done with mama duty!

I have me time at night which is when I take a shower, procrastinate or continue doing work or plan a project for the kids the next day.  Then it’s Netflix time with the fat one before we go to sleep wtf.

And it starts all over again the next day. ^^

What I learned about myself during the lockdown

Here’s where I check my privilege.  Life during MCO hasn’t been hard at all.  It felt strange to not be allowed out except for groceries of course, and after two weeks of staying in, I experienced slight agoraphobia at the thought of going out.

But honestly it’s been a blast.  I’ve been experimenting with different recipes nearly every day and realizing that anything I want to eat, I can just buy the ingredients and make it why are we going out to eat wtf.  Sure it may not taste that nice LOL but it’s empowering okay.

I first started when I was pregnant with Penny and craving desserts but then she was born and life happened and I never had the time.  Because of the lockdown, I, like everyone else in Malaysia, found the time to bake until now the whole country got shortage of cream cheese and chocolate chips lol.  But I rediscovered an old hobby!

I also discovered that I am actually pretty good with kids and teaching them!  I didn’t think I would be cos I’m not a kid person to be honest, and the only kids I really like are my own LOL.

But with schools shut and home schooling on the horizon, I found I make a pretty good teacher *smug wtf*.  I wrote in a previous blog post about how my kids are learning at home so you can refer to that for why I started planning activities for them.  I learned that I really enjoy planning projects and learning activities for them.  I love when something clicks for them or the awe that appears in their eyes when I unveil some science experiment. I’m also quite patient and talented in closing one eye when they paint on my floor and spill flour and eggs lol.

I learned that I miss music wtf.  With the extra time on my hands from not going to work and not driving around sending the kids, I bought this online wtf.

Ten years of electone lessons save me wtf.  I used to hate learning electone/organ so much and resented my mom for making me go all the way to grade 8.  But now I find myself wishing I had an instrument at home to play whenever.  So I got a ukelele.  It’s my new hobby now.  Watch out Israel Kamakawiwo’ole hahahaha. (totally had to google his name) And watch out guys one day I unveil my terrible strumming to the world.

What I learned about the kids (and what they learned)

Now it’s interesting.  I see so many articles about anticipating the discomfort and uncertainty kids may experience in these strange times.

Mine?  They’re super duper happy (I cannot emphasize this enough) about staying home for weeks and weeks.  Either the world outside sucks so bad or we did a fantastic job creating a home they love so much they don’t want to leave lol.  But truly, they’re content to just be home with each other, their toys and games, and us.

One unexpected development though is that from fighting every day, they hardly fight now.  Well I asked them and they said they still do, but apparently over this lockdown, from playing with each other constantly, they’ve learned to resolve conflicts on their own without running to me.  O_O  I remember early on they had a huge fight over what I forgot, but Fighter was raging and holding a grudge and Baby was sobbing her heart out.  Fighter has issues letting go of grudges sometimes but since then, it looks like he’s sorted it out on his own.  Penny on the other hand, was crying cos she was feeling remorseful over something she did to Fighter, and that too is a first.

They’re even closer now than before.  They choose to sleep in the same room every night.  They even go shower together and Fighter washes Penny’s hair.  While Penny has decided it’s her job to make their nightly milk for both of them.  It’s pretty amazing the way they love each other.

Baby learned how to read!  We’ve been doing zoom classes with her phonics teacher and playing Pictionary and just various activities and I think it’s finally clicking for her.  Today I showed her a worksheet and she circled the words correctly.  I said “see you’re reading!” She said, “No, I just see the letters.”  Not knowing that is reading hahahaha.

And Fighter learned long addition and long subtraction.  I’m particularly proud of this cos Standard 1 level math is only counting and comparing which number is bigger wtf.  At least when he goes back to school he’ll be advanced, which is more than I can say for his Mandarin and Malay wtf.

What else?  I realized the kids are growing up even as we stay at home.  Our dinner table conversations hit home that they’re so articulate now and full of their little opinions and their own sense of humors and it’s a joy listening to them.

Life has been reduced to the simplest things now – making home cooked food, spending more time with my family and being there for the kids to a greater extent, keeping in touch with friends via lovingly sent food and gifts.  Honing old skills and picking up new hobbies.

Now that the MCO has been conditionally lifted and I get a bit busier with meetings and work, I feel the loss. Of time to pursue cherished projects and interests.  And even Tiktok LOL.

The kids thoroughly enjoy MCO and actually so do I hehe.  Even now I look back on this time with fondness. 🙂

OK back to my Tiktok wtf.  Of which I have no followers cos I am an ancient uncool relic on it wtf.