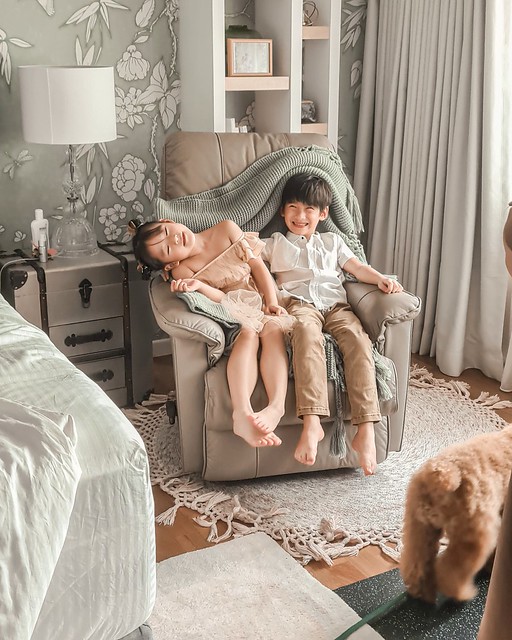 We’re back with more Things Fighter and Penny say!

Penny bought something with her allowance and I paid for her first.  She was supposed to pay me back when we got home.

Fatty to Penny: “Baby, who do you prefer to send you to ballet – me or Mommy?”
Penny: “Mommy.”
Fatty: “Why not me??”
Penny: “Because Mommy stays and watches me dance.  You didn’t see me dance. I dance so nice.”

Penny received a Nintendo Switch from us for her birthday but because it wasn’t Fighter’s he didn’t get one.  Instead we encouraged him to save up enough money to buy his own.  We set him a list of goals to hit, and if he hit them we would reward him.  So stuff from winning a medal in his poetry recital competition, reading x pages of a book by himself etc.  He eventually made it and bought himself his own Switch!  But it’s notable that Penny actually gave him RM100 of her own money because “she didn’t need it” hahahaha.  She also offered to go to Grandma’s house and wash dishes and give Fighter her earnings from Grandma lololol.  Sometimes they’re so sweet and sometimes they’re so irritating to each other.

And when they’re irritating?  One day before Fighter bought his own Switch, he wanted to play with Penny’s but she wouldn’t let him.  In a huff, he stalked off to his room, pulled his cash out and started counting it.  To see how long more until he has to put up with this shit LOLOL.

So we have some people in our lives who think that Black Lives Matter is a joke and um who happen to view Black people in a racist manner.  Fatty and I were discussing this, and Fighter overheard. So we had to explain in short that Uncle X doesn’t like Blacks.

When singing karaoke at home.

Penny: “Daddy’s singing is so bad he sounds like he’s talking.”

Fighter (seriously): “Mommy, I think the house is haunted.  Every time after I charge my Nintendo I turn the switch off, but the next time I see it again, my plug head isn’t there, it’s on the table.”
Me: “It’s me.  I’m unplugging it.”
Fighter: “Ohhh.”

Fatty was singing one of Penny’s favorite songs bad on purpose just to annoy her.

Penny has a new teddy bear.

Sometimes when we have leftovers, we give bits to Butters as a treat.

Penny was helping me cook and received a small burn on her finger.

Penny: “My finger hurts. But if I cut my finger off then it won’t hurt anymore cos it won’t be there.”

We are watching Captain Marvel

Fighter: “How do they create gravity inside the spaceship?”
Fatty: *goes into long spiel about how something has to move in order to create gravity and having to create propulsion to simulate gravity*
Me: *keeps quiet because I was gonna answer ‘they just press the gravity button’ *

We gave Butters a haircut so for about a week he looked thinner than normal hahahaha.

Penny: “I like Butters when he’s skinny.  He looks cute and smart.  When he’s fat he looks dumb and greedy.”

We posed the “Trolley Dilemma” to the critters.  If you’ve never heard of the Trolley Dilemma, it’s an ethics question.  It basically tells of a runaway trolley running down a track.  The track splits into two, and on one track is five people tied up there so the train will kill them if nothing is done.  However, if you pull a lever, the trolley switches to the other track.  Unfortunately, on the second track is one person standing on it, and pulling a lever means you would kill that one person.  What would you do?

Fighter and Penny: “Easy.  Kill one person is better than killing 5 people.”

Me and Fatty: “But what if that one person is a baby?”

Fighter and Penny: “It’s okay.  Still kill the baby because the baby is so young it can easily be reborn and go back to its age.”

Hahahahahahah omg.  First, they clearly have very Buddhist beliefs hahaha.  And secondly I think how they got to this idea was because I was telling them it’s not a good thing to chop down old healthy trees because they took so long to grow to this age that it would be such a waste.  So I think they applied this logic to humans hahahahaha.

Some time in the beginning of this year, Fighter developed what I suspect was a crush (or the beginnings of one) on the older sister of one of Penny’s friends’ who at ten, is two years older than him.

Back in March, we had a small birthday party for Penny at home.  4 or 5 little girls Penny’s age came to play and they all busied themselves doing little girl things.  Fighter ended up playing with the older sister most of the time.  I guess he had a blast because after that he kept talking about Rachel this Rachel that the next couple of days after!  He also told us how he wanted a birthday party at home too.  When I asked who he wanted to invite, he mentioned a few boys and then Rachel, the sister.

Me: “Rachel?  Wouldn’t she feel left out as the only girl?”

Me (dawning on me): “wait. Do you like Rachel like you like Chase and Ayden?  Or do you like her as a girl?”  I actually didn’t know what I expected him to answer at this point hahaha.  It just struck me because he has never talked like this much about any friend before, much less one who’s a girl.

Fighter: “What do you mean like her as a girl?”

I didn’t push it or ask anymore but gradually as time passed he talked about Rachel less and less hahahahah.  I’m not sure if it was even a proper crush now, or if he was just super impressed by this older, knowledgable friend who spent time with him when he was kicked out of Queen Bee Penny’s room.  I hope it’s not la I’m not ready for them to grow up this fast!!!

We have a neighbor, a boy a year younger than Penny.  I’ve mentioned before in my Insta I think but this boy can be erm quite naughty.  He doesn’t listen to his dad, often does the opposite of what his dad or any adult says, lies, and I even caught him trying to step on Butters on purpose.

Anyway one day, Fighter and Penny were downstairs playing (or trying to play wtf) badminton with each other.  Neighbor kid runs up and asks to join them.

He picks up a racquet but instead of playing properly, he swishes it around going, “Haiyak haiyak” then attempted to hit Fighter with the racquet. O_O

Penny: “It’s not that funny also.  Nobody else is laughing.”

Penny (getting angrier): “If you laugh again I’m going to get angrier and angrier and fire will blast out of my head.”