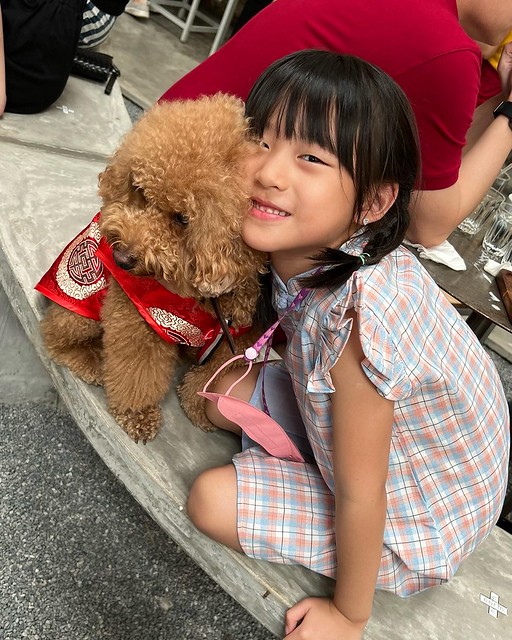 So a few weeks back, we found out that Penny… *drumroll* started a paper business at school.  She’s been selling paper to her friends.

Specifically tiny sheets of paper that come from a notebook that another friend gifted her for her birthday.

RM 1 for a post it note size of paper each.

(She brings this little notebook filled with rainbow colored pieces of paper to school and when she has free time, she uses the pieces of paper to either doodle or fold origami.  Her classmates sitting around her have noticed and asked for paper for themselves to draw too; in fact, that’s how she made some friends – by giving them pieces of paper.  Ahh seven year olds.)

She actually told our helper Sassy and Sassy told me and Fatty.

My eyes widened.  I went to grab her wallet.  I opened it and this is what I saw. 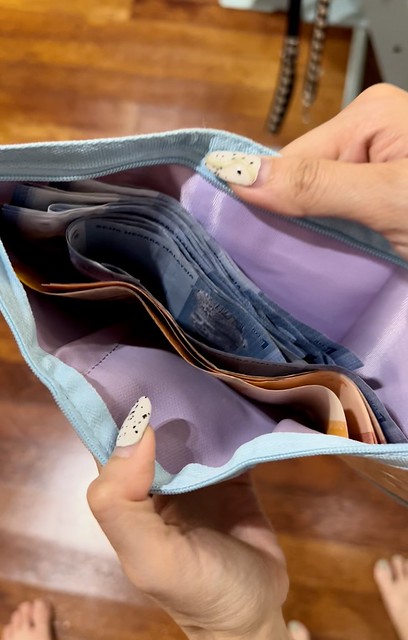 This is the conversation that ensued.

Me: “Why didn’t you tell us yourself, Baby?”

Me (thinking): Because she wanted to have something substantial to show us or because she was scared we’d shut her down? wtf.

Fatty: “So why did you start selling paper? Can you tell us?”

Penny: (looking slightly shifty eyed): “Well my friends kept asking me for paper.  So I thought to myself, why not sell it? I sell one paper for 1 dollar.  Lucas bought a lot!  He’s very rich, he brings a lot of money to school.”

Me: “Um, well, so are you going to sell more paper tomorrow?”

Penny: “Yeah.  Or else how can I buy nuggets from the canteen.”

The next day after school, I gently prodded her, “So did you sell any more paper today?”

Me: “Wow, very good strategy.  Since when is every Thursday promotion day? You haven’t been selling paper that long.”

Me: “Oh, so you gave away paper for free today like samples?”

Penny: “Yea.  But I sold cellophane tape for the paper.  1 dollar per tape.”

What. No wonder a couple of days ago I overheard her asking Fighter if tape was permissible in school.  And selling pieces of tape? That’s an even bigger margin of profit than selling post it note sized paper!  I started to sweat.

(by the way guys, I’d like to draw your attention to the fact that she’s making pure profit.  Her cost is zero since she brought the tape from home and her notebook was a present wtf.)

Fatty decided to ask, “So when you sell your paper, do people come up to you and ask you to buy?  Or do you go around and ask people if they’d like some paper?”

Penny: “Oh usually they ask me for paper.  But if nobody asks me for paper I go and ask them if they want to buy.”

*doesn’t know whether to laugh or cry*

Plenty of mixed feelings for us!  Fatty and I were half worried, half amused and maybe another half impressed.

So we were pretty impressed at her business acumen, that she came up with the idea of selling something scarce that she owned that was also in demand hahaha.  That she was savvy enough to recognize that demand and created an opportunity for herself to get something in return.

On the other hand, she clearly had a very easy captive market with no sense of the value of money LOL.  And it didn’t seem right that she was making money off her friends without even exerting any effort.  (As a seven year old myself, I had designed, drawn, colored and cut out jewelry – rings, watches, bracelets – from paper which I then taped up – for the waterproof factor – then sold to my friends.  I’d told her this story and she’d responded, “Well at least I don’t have to do any work like Mommy did.” FML.)

On the third hand, we didn’t want to dampen her entrepreneurial spirit either.  I loved that she came up with these funny ideas by herself and I didn’t want to stem her thinking and creativity; I would like very much to encourage her ideas and endeavors.

On the fourth hand, I wasn’t ready to face angry parents of classmates who are out of pocket lots of ringgits because of her paper business LOL.

In the end, it was Fat Her Ooi who told us how to resolve this.

We told her that it was fine if her friends wanted to pay her for her stationery.  But she shouldn’t keep the money all to herself because paper doesn’t cost that much la wtf.  Instead what she could do was use the money to buy nuggets or treats from the canteen and share them with her customers hahaha.  Then everyone happy wtf and at least she’s giving her friends back their money in kind.

She agreed to it happily enough.

Well, her business didn’t last long after that though.  I guess the kids got bored of the novelty of the paper and demand steadily declined from there hahahahaha.  Penny didn’t seem too bothered, probably because it meant more paper for herself.

And today I heard from the kids that her paper business has officially been shuttered.  Because at assembly, the school made an announcement that students are not allowed to give each other money. I hope it’s not from her case wtf.