Observations from Teach for Malaysia Week

TFM Week is basically a week where selected figures take on a class each in a high need school.  They work with Teach for Malaysia fellows who are already teaching in those schools and come in during a class, talk to the students and ‘teach’ that class with the fellow.

These people are usually high flyers or icons in their respective industries – they’ve had politicians, movie stars, CEOs and all kinds of different people.  They’re almost always inspirational. And that’s the whole point of TFM Week – to inspire kids and to give them a peek into the world beyond what they know in their lives.  Also probably to make class more interesting wtf.

Suet (who was a TFM Fellow for two years) asked Fatty to be a guest! Initially Fatty was very reluctant because he didn’t think he would be able to connect with the kids – his first language is English and these kids would probably be speaking Malay or Chinese, and his job may not be interesting to someone outside the industry or someone who doesn’t know blogs.

Also I am generally quite kepoh wtf.

So I exercised my wifely influence wtf and Fatty agreed to do it. Off we went to a public high school in Klang. 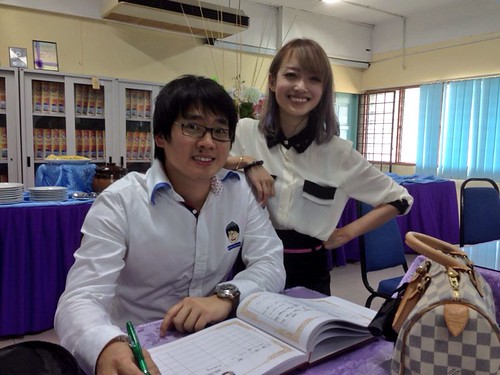 Here’s us inside the Bilik Gerakan before class.  Note Fatty’s faceception shirt hahaha.

It was mind blowing. When we parked our car under a school building, kids from above called out to us. Quite normal cos I remember in high school cheeky boys would do that to visitors too.

But then we passed by a group of girls who stared unabashedly at us wtf. One girl even put her hands together in like a prayer pose and said reverently. “you’re so beautiful!”

I don’t remember being like this at fourteen! I’m sure I was either awkwardly shy, or busy trying to act cool and definitely wouldn’t have said anything like that. I dunno if it’s because these kids are not as ‘worldly’ as we were coming from a big urban city?

Imma be honest. When we were in the Bilik Gerakan, the school and teachers put on a sort of welcome/launch to the TFM Week. They had speeches upon speeches and I thought it was a nice thought….until it went on to 5 minutes after class was supposed to start.

Then I remembered this was how it used to be when I was at school too. A lot of pomp and circumstance, as is the norm for all Malaysian government-related matters. It’s the Malaysian way. I was a bit annoyed because I heard that while we were in the airconditioned room listening to speeches and opening poems, the kids were all lined up outside their classroom waiting for their teacher before they could go in. I really think a lot of that energy and effort could have been put too far better use – shouldn’t the priority be the kids after all? – but that’s just my opinion. 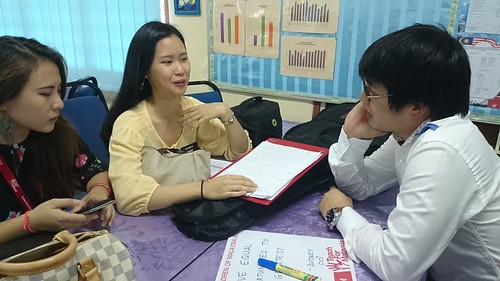 Here’s Fatty prepping for his lesson with the TFM Fellow, Elizabeth, and Suet who now works for TFM.

Anyway we finally got into the classroom.  All the memories came rushing back to me! The oversized pinafores, the crazy heavy backpacks, the limp ponytails and sweat from playing outside at breaktime. 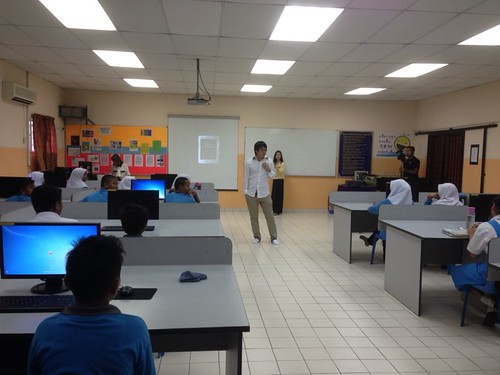 One thing struck me though.  In my school we had a more or less equal split of ethnicities and while we weren’t all like best friends, there was a lot of camarederie and unity as a class.  But this class only had max eight Chinese students or something (the rest were Malay) and the Chinese all clumped together, especially the girls who seemed to stay in their own dream world. :X 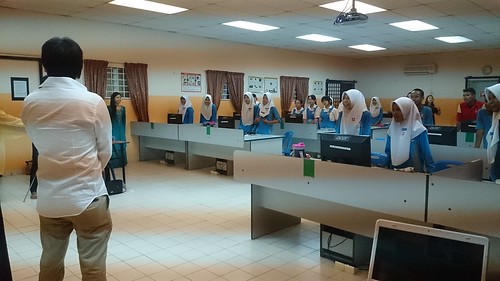 Here’s the view from where I was standing, next to the teacher’s desk.

I awkwardly stood there with a bag of snacks (to bribe the kids WTF) cos I’m super bad with kids. The only reason why I’m now okay with babies is cos of Fighter wtf.

I was also a bit worried for Fatty to be honest. If you know him in real life, you’d know he speaks SUPER fast. And the words he uses sometimes very chim I worried the kids wouldn’t understand and he’d lose their attention. 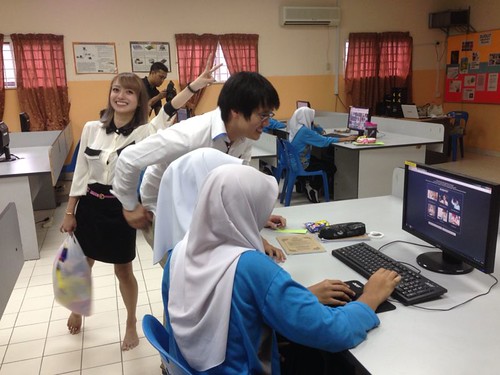 Me with my bag of snacks annoying Fatty wtf.

It turned out pretty good! Fatty and Elizabeth were very valiant in engaging the class and the class responded, despite them all being very poor in English. 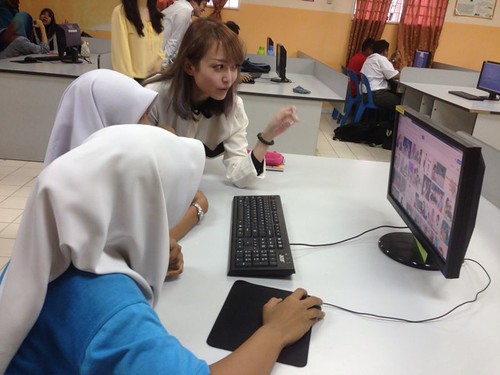 I also got in on the action.  We were using computers to complete an English assignment and Elizabeth told us that these kids probably don’t have a computer at home also. 🙁

So my greatest achievement of the day is teaching them how to CTRL+V to paste something lolol.  They all went ohhh and looked at me in awe as though I invented Facebook hahahaha.

Elizabeth had shown the class our meme proposal beforehand, so the assignment was based on memes. Elizabeth said her kids had all sorts of ambitions but maybe due to a lack of exposure or naivete, had no idea how to reach those ambitions or what really went on in such and such job. So she assigned them to pick a job and create a What People Think I do meme. 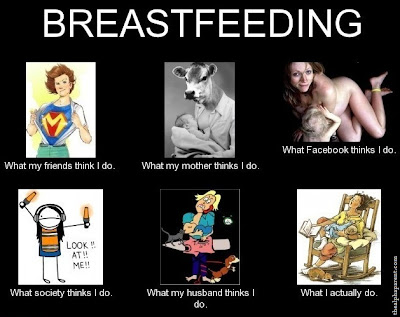 For those who don’t know, this is a sample of the meme. Source. I randomly chose this because funny hahaha. 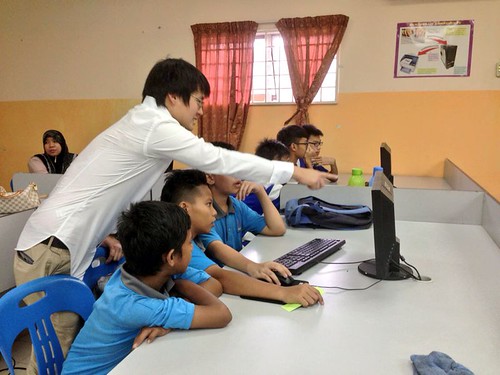 The humor to it was a bit too sophisticated but some kids got it! 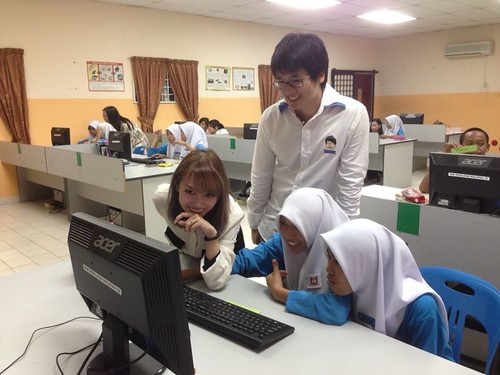 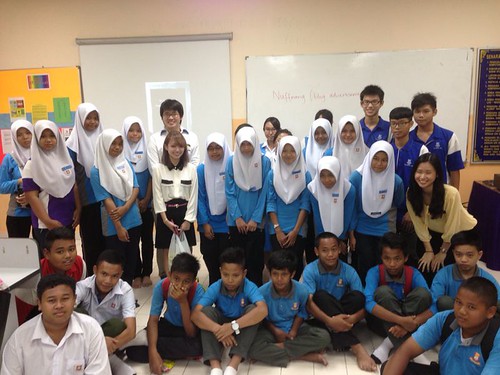 Here’s some things I realized which I never did when I was at school.  And they’re all about the teacher. I guess because today we WERE the teacher. As a kid I never really thought of what a dedicated teacher goes through every day.

Elizabeth is the teacher and Fatty was the guest. I didn’t do anything besides go around and check on their work and maybe guide them a bit and *I* was exhausted, what more Elizabeth! Sure you can be a shit teacher and ask students to copy stuff off the blackboard or read monotonously from the textbook but a good teacher would work the entire lesson to engage the students and to keep the energy level up. It’s easy to keep the energy up if you feed off other people’s excitement. But more often than not, students won’t respond so it’s up to the teacher to dig deep within herself and keep being excited/energetic about the lesson.

It’s like the teacher is the sun giving off unlimited energy and the students are the plants just absorbing wtf.  It’s exhausting being the sun wtf.

2. Having to balance between the slow and fast

Every kid has a different learning pace.  A teacher has to balance the slow and the fast learners, make sure the slower kids can keep up, and the faster kids are challenged and don’t get bored. And they have to do this every class, every day.

3. A teacher may feel demotivated but they can’t show it

It’s exhausting. It’s frustrating. The heat in Malaysian classrooms is just terrible wtf. There’s so many ways a teacher could feel demotivated but if she is, she cannot show it. She has to keep on giving it her 101% because it’s not about her, it’s about the students. I can’t think of a more demanding job, except maybe the POTUS wtf.

Which is why…hats/caps/beanies off to the TFM Fellows who are taking two years out of their lives to make a difference to our (bad) education.

Also teachers should be paid more!!!  I speak for Malaysia only cos I dunno how goes it in other countries. There should be more rigorous standards to meet to become a teacher and they should be paid more, a salary deserving of the high standards they should be bringing to the table.  Teaching should definitely be conferred a higher status in Malaysian society too, and thought of as a proper career or profession*, not something for people who don’t have any better prospects or people who want long school holidays wtf.

*like how it is in Japan! I read somewhere that teachers in Japan are mostly male cos it’s a highly respected profession and the teachers receive higher pay than most civil servants, as well as have to go through a super stringent selection process.

That’s the first step for Malaysia I think.

Fatty and I can’t decide what kind of school to send Fighter to. We both went to government school but now we hear awful things about the standards of it now.  So TFM is really an awesome step in the right direction in terms of our education system.