Of eating and pooping

I blogged briefly about starting Fighter on solids before and I thought I should update a bit more about it.

As blogged previously, I started with rice cereal as recommended by the pediatrician.  Seasoned it with lotsa breastmilk and tried it out and he readily ate it up for a few days.

Then it was time for different foods!

At the start I read and researched about baby foods. It was a momentous decision! It’s a major milestone for Fighter so the first food must be majorly marvelous. Hahaha.   I finally decided on… 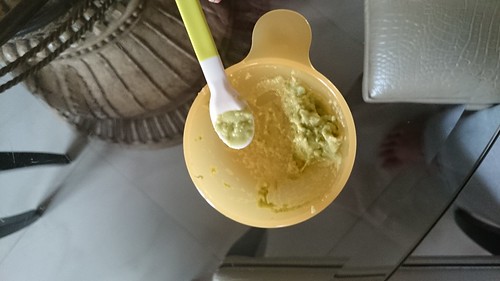 I got a ripe one and mashed it with a fork then added a few teaspoons of breastmilk for a familiar taste.

I know it looks damn gross right. Honestly I can’t blame Fighter; if someone served this to me I’d puke it up too wtf. 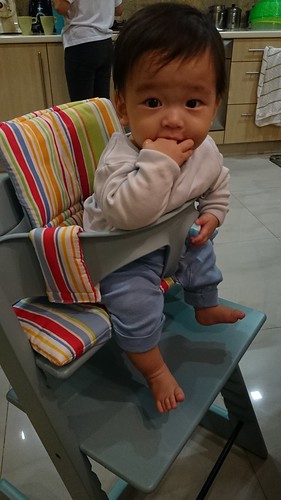 To my delight he ate most of it!

I was prepared to go into battle wtf.  Prepped myself with an arsenal of helicopter noises and plane announcements to pretend the spoon was a plane trying to get into the airport of his mouth WTF.  Totally learned that from Fat Her.

But he did pretty well! Once he got over his tongue stick reflex the I think out of curiosity more than anything else he quietly enough ate it up.

Then I progressed to other fruits and vegetables.  But before that I added one crucial tool to the kitchen. 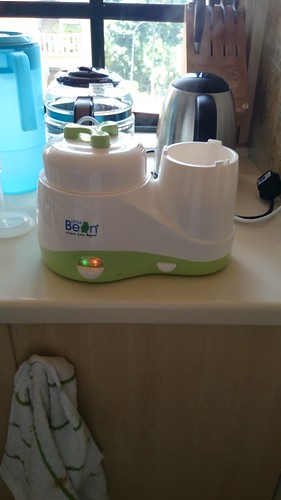 I tried using a regular blender but it was quite tricky cos baby food portions are obviously small.  So when you put it into a regular sized blender which is way too big, cannot blend anything!  At first I was reluctant to get a food processor cos I checked out Phillips Avent one and holy mama at that price I’d pray my baby doesn’t grow teeth for at least ten years to maximize the usage for the price I’m paying WTF.

But a reader told me about this Little Bean food processor and it’s only RM100+! Can steam AND puree some more so I fasterly bought it.  And I love it so far it makes making baby food so simple even a kitchen noob like me can operate it! 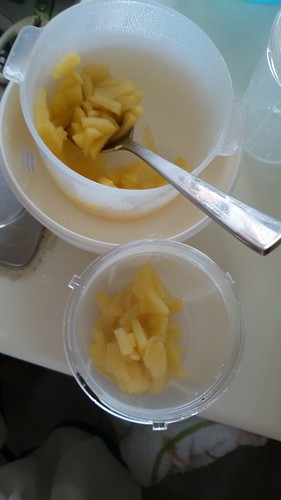 First puree I tried was apple.  Cut the apple into small cubes and steamed it.  When I took out the steamed apple to put into the blender I nearly vomited WTF.

Did you know steamed apple smells daaaaamn weird!?!? I felt sure Fighter would reject it but already steamed what to do!  So I puree-d it. 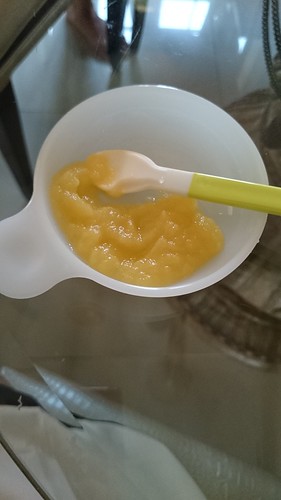 And got this nice yellow thick sauce.  I tried it and…oooh really quite yummy wtf.

Fighter loved it!  He ate the plate clean.  And I was ecstatic because it’s so easy to get apples and so easy to prepare them too.  This would be Fighter’s staple food wtf. 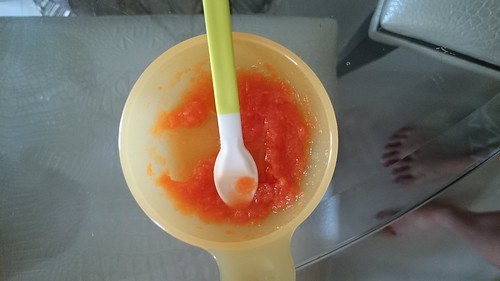 He took one spoon and then refused the rest. T_______T I was super surprised cos papaya seems like the type of food that babies would love – soft, sweet and juicy.

But he really didn’t want it.  Then grumpy for the next two days wtf true story.  The second time I let him try papaya, he was grumpy for 1-2 days too! I dunno if papaya gave him a tummy ache or what. :X 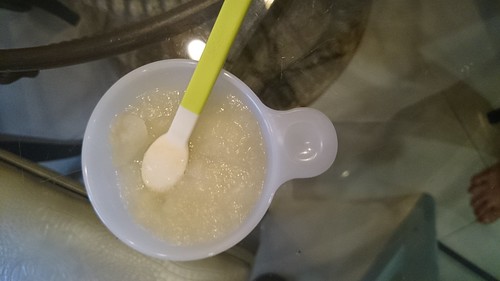 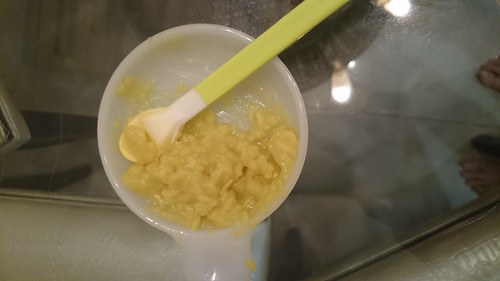 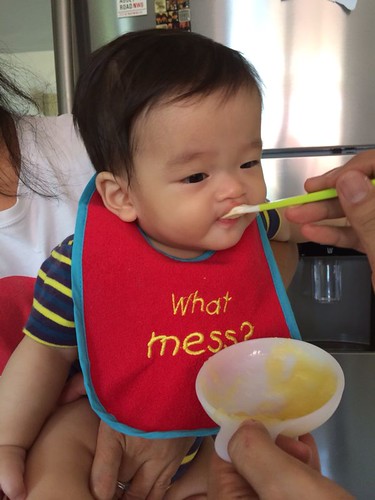 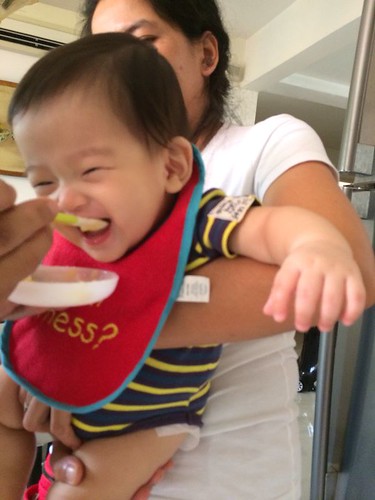 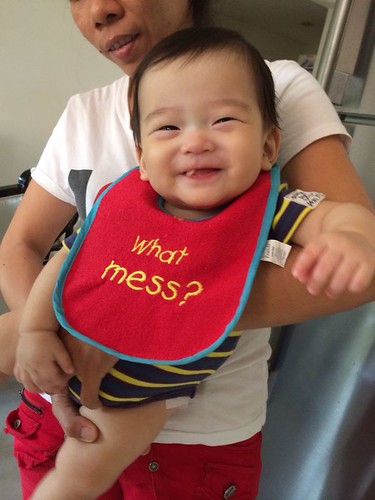 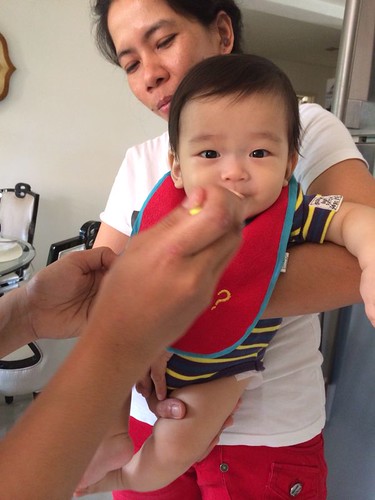 There was a dark period.

He never had a problem with constipation before this so I had no idea what it was about.  But friends I talked to told me about BRAT, the four enemies of baby constipation wtf – Banana, Rice, Apple, Toast.

FML 3 out of 4 are the only foods Fighter will eat.  And probably only cos I never fed him toast before wtf.

I waited for three days and all he gave me was wet diapers wtf.  So on the fourth day I fed him a dose of lactulose and three hours later… 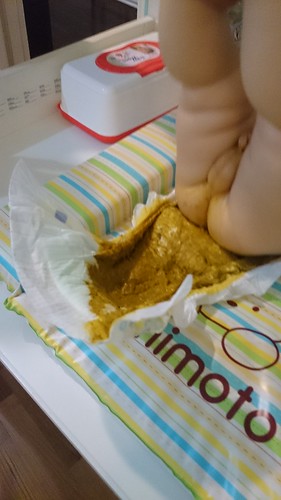 I swear when I picked him up he was twice as heavy as normal wtf.

To my disgust (and fascination) there was so much poo it had seeped up to his belly button WTF.

I don’t think I’ve ever been happier to see poop though wtf.

After that incident, thankfully his digestion and waste system went back to normal.  I kept in mind the P saviors of constipation (pear, papaya, plums, prunes, etc) and also gave him a bit of apple juice after every solid meal to to help with his pooping and so far all is well.

Right now I’m still having trouble getting him to eat. ;____; I think he only ate well the first couple of weeks because it was a novelty and then he got bored and stopped. -_-

Yesterday he ate all his banana, but otherwise every meal is a hit miss. T_____T Apple, pear, plum, avocado all also sometimes can sometimes cannot. 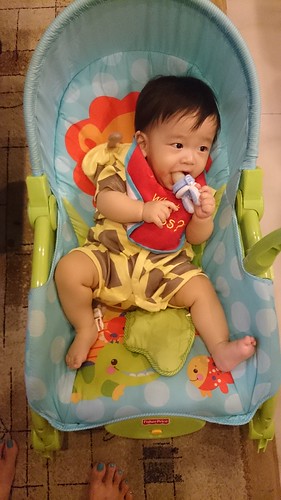 Today I broke out this pacifier/feeder thing that Jammie gave me.

It’s like a gigantic teether except it has holes in it and you can fill it with puree. When baby bites on it, the puree squishes out through the holes and he gets to eat in a way he can control.

Fighter chewed on it and of course the puree (apple + cereal) squirted out.  He chewed on the puree thoughtfully for a while (because new experience I guess) then lost interest. 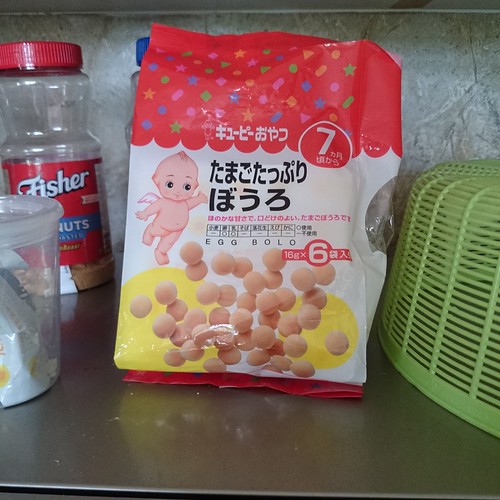 This is the only thing he’ll eat happily. Egg Bolou wtf.   It’s just round egg biscuits from Kewpie (got them from a supermarket in Tokyo) but he loves! I wondered if he liked it because he just didn’t like eating mush.

So I’ve been reading up on baby led weaning and yesterday I attempted to try it.  Cut up an apple into miniscule pieces and steamed it. He readily took it into his mouth but he couldn’t manipulate his tongue and lips enough to properly gnash it between his gums! The apple pieces kept falling out wtf. So that’s a dud.

So that’s the story of Fighter’s food and poop wtf. If you’re a mommy, what are the problems you’ve faced with your child’s feeding and how did you solve it?