More signs of being an auntie (and Bangkok)

I’m back! In case you missed me, I was in Bangkok for a few days over the weekend with Bobo and Hui Wen! In case you didn’t miss me, I wasn’t really gone very long la WTF. *makes excuse

Anyway this trip was planned because at a time where I was desperate to get away from everyday duties for a while and the both of them were more than happy to go.  We jokingly called it the taitai trip because we envisioned a leisurely girls trip filled with shopping, massages, high teas and the occasional cocktail at an atas bar.

The good news is that the three of us are all the same age, and in the same stage of life and mentality (and same interests) so it was expectedly very fun!  It was also a very very good bonding experience; now that we’re older we have less time to hang out like how it was in college or high school, so the trip gave us ample opportunity to just talk, catch up and learn new things about ourselves.

The bad news is, the stage of life I mentioned? It’s not taitaidom. It’s auntiehood wtf.

See we kept meeting rude/annoying people on the trip.

1. At KLIA 2, we approached the foreign passport counter since it was much nearer and there was no line anyway.  The stupid officer stood up and shouted, “SINI TAK BOLEH! KENA PERGI KAUNTER PASSPORT MALAYSIA!” (Can’t do it here! You have to go to the counter for Malaysian passports!)

Baffled, we asked, “why not? There’s nobody in line here anyway.”  Because aren’t the foreign/citizen counters all a guide anyway? If a counter happens to be free in any other self-respecting airport they will redirect people there regardless of foreigner or citizen right?

But the guy kept shouting, “TAK BOLEH TAK BOLEH! KENA PERGI SANA!” (CANNOT CANNOT MUST GO OVER THERE) Shout like his house on fire like that.

Never give us a good reason so I shouted back “KAMU INI PEMALAS LA!” (You’re just lazy!) and stomped off to find the Malaysian counters.

2. Lining up to board the flight, our line kena cut by a middle aged woman and her daughter.

I turned passive aggressively to Bobo and Hui Wen and said loudly, “Are there two lines here or did this woman just cut my line?”

The woman heard and she also said to her daughter passive aggressively, “There’s two lines here, we’re not cutting line.”

Yea there’s two lines but the three of us were lined up in the two lines.  You still cut us, lady.

Anyway after these two incidents Hui Wen asked me, “were you always so vocal or only recently?”

I thought about it and realized only in recent years did I become so loud!  After my Kempen Sopan Santun to be precise.

I remember the first time I told a stranger off for being rude.  I was still in college doing an internship in KL. I took the LRT home every day so I was lining up to buy a ticket from the machine.

Then suddenly an old man with white hair went up to the head of the line, cut everyone off and tried to put his money in.

Everyone in line wasn’t happy obviously.  We all looked at each other in anger but nobody did anything.  They all seemed prepared to let him get his way.

I was fuming at the injustice.  It was a very long line so all of us had been lining up for ages.  Worse, someone else had the nerve to go stand behind the old man, creating a second line and cutting the rest of us even more.

So I asked the person behind me to hold my place, went up to the front and told the old man to please go behind and line up.  He didn’t look at me but shuffled off to the back.  The fella behind him also no choice but to go.

I did it! But inside I was struggling whether I should go tell him off.  I had no confidence cos I was a kid and this was an old person. Everyone there was an adult too and frankly I was terrified of doing the wrong thing/drawing attention to myself.

I have no such qualms today. And I think that is a sure sign of auntiehood wtf.

Bobo and Hui Wen are also very vocal ok don’t think I’m the only one hahaha. They all also said they voice out more now that we’re all older.  Maybe as kids we really didn’t dare cos we didn’t feel like we had a right to say anything.  But now that we’re all old and married and “adults” now we don’t feel scared anymore? Hahaha.  Either that or we’re really all aunties now and don’t give a shit.  Last time I’d think and think and have to screw up my courage to do it.  Now we just straight fire come out from the mouth wtf.

(Hui Wen worse okay apparently once she scolded a businessman on the train in Singapore cos he didn’t give up his seat to a pregnant lady HAHAHA.  I wouldn’t dare do that la cos it’s sort of not my business hahahaha but she did it!  Her efforts for nothing though, apparently said pregnant lady just huffed and sat down like it’s her right and didn’t thank Hui Wen FHL.)

Anyway here are photos from the first day of our Aunties trip!

(we called it Tai-tai trip but there was nothing very tai-tai about it la.  Purposely chose all the cheap shopping areas and food, haggled with storekeepers like bona fide aunties, take BTS to save money, pull out calculator for everything.  So should really call it Auntie trip wtf.) 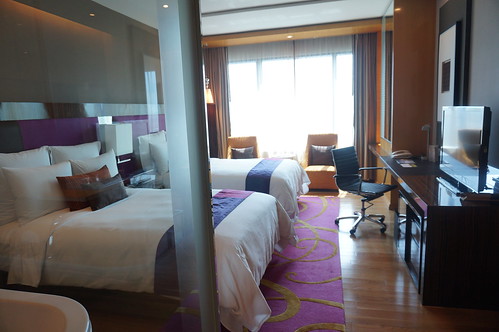 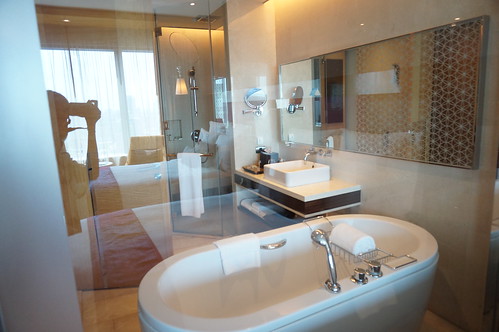 The only taitai thing about the trip hahaha. We stayed at the Renaissance in Erawan. It was RM300+ a night which is not too bad cos I think it’s 5 stars! Or 4 stars wtf. 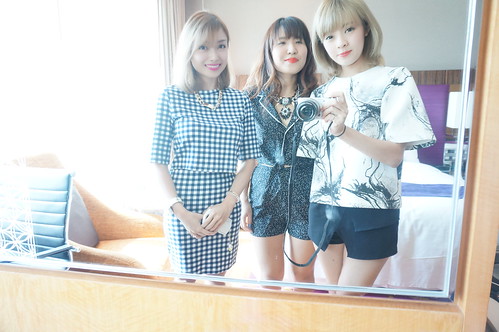 Got to the hotel and changed to go out!

My top and skirt from H&M.  Worst decision of the day.  Nearly evaporated due to the heat. 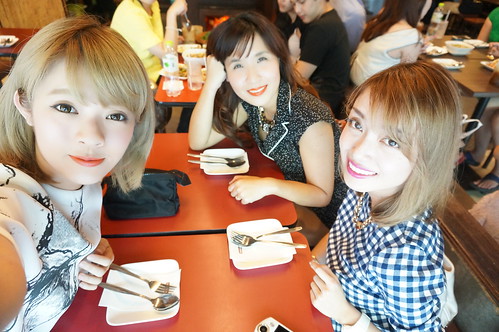 First stop was lunch in Siam Square.  Restaurant is called Som Tham, on recommendation from Bo and Huiwen the Bangkok experts. 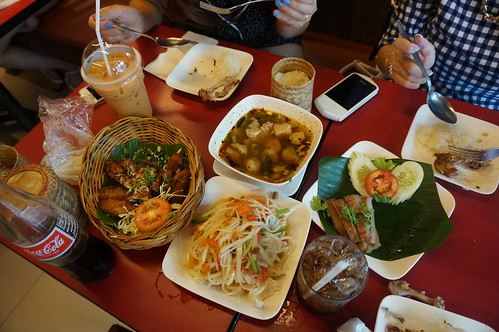 Topped off with Coke ahhhh I always go for Coke whenever it’s too hot.  Which was every day in Bangkok.  Goodbye stomach lining. 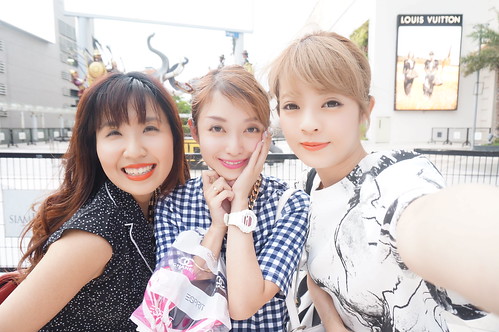 Then went to check out Paragon where we lusted over Prada sling bags.  But because we’re all aunties and not taitais we never buy wtf. 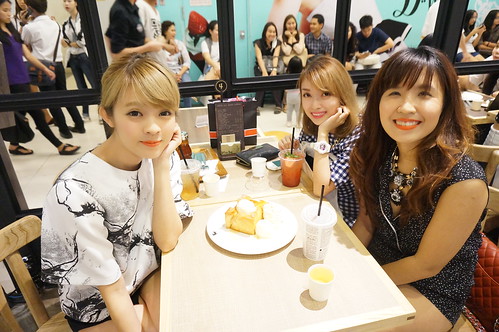 Tea time at After You in Paragon.  Also supposedly very famous for their honey toast? 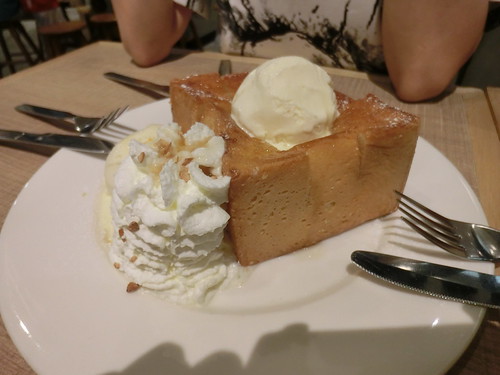 Quite nice la I must say!  Warm and full of butter and honey with vanilla ice cream on top! I kept comparing it to Rotiboy (which I also super love la hahaha) much to the disgust of the other two. 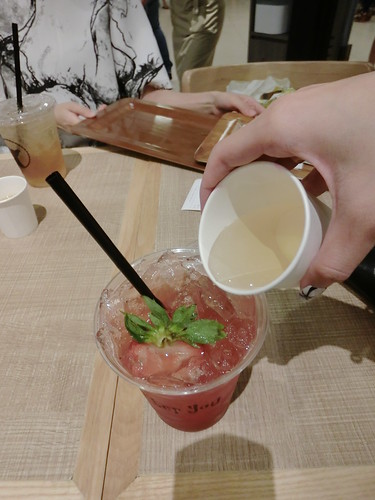 Drinks were way too sweet though. The Thais sure love their sugar. I had to dilute my strawberry limeade with free tea only can drink. 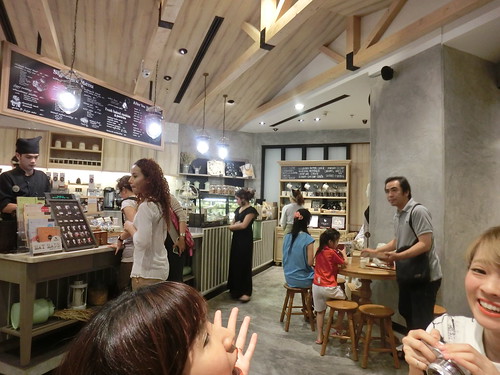 Nice ambience.  Our day started damn late so by then it was night. 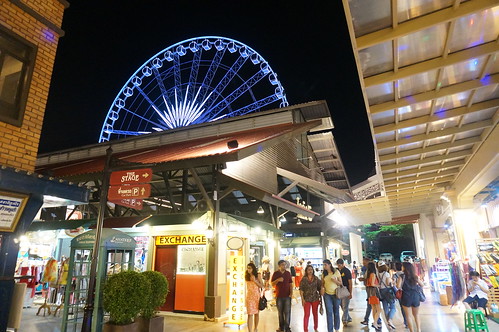 Headed off to Asiatique for Huiwen to run her wedding errands!  My first time here and it really is very cool!  Full of local designers/hipster looking outlets and just very nicely done. 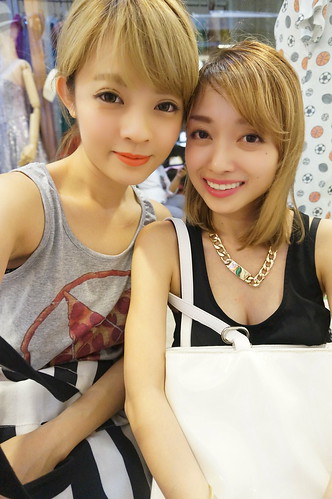 Here’s me and Bo waiting for Huiwen to try on one of her wedding dresses. *big shiny eyes

Won’t post her photo here la for maximum impact at her wedding wtf. 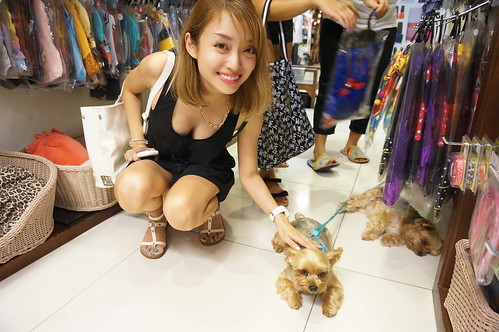 At a pet clothing shop!  Because her corgi Rocky is going to be ringbearer hahahaha. 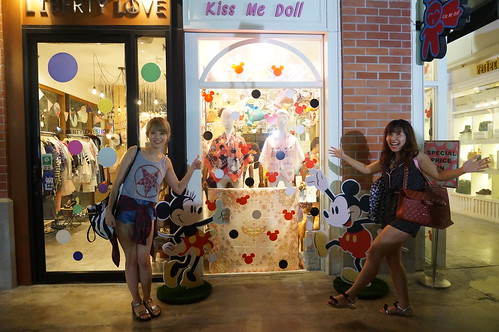 The famous Kiss Me Doll!  I’d never heard of it before but Thailand is full of impressive local designers and Kiss Me Doll is one who specializes in scarves. 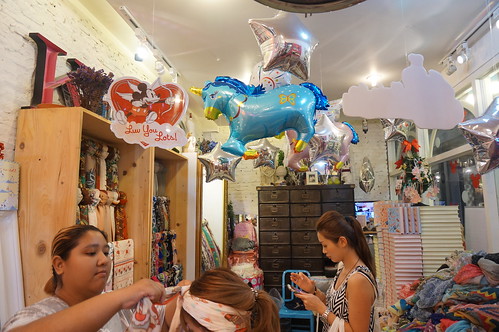 At first I was like scarves? Meh. Then I saw the scarves. 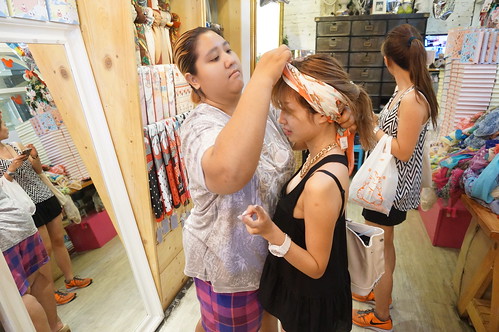 And the sales assistant showed us how to tie on head in different styles, wear as shawl etc and I was sold. Literally. Hahaha. 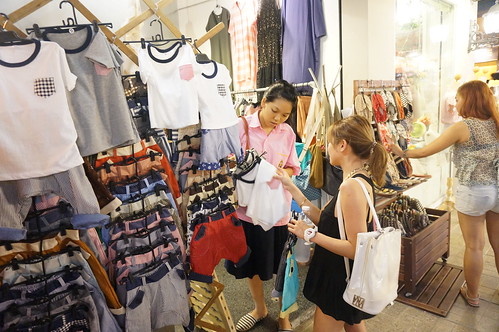 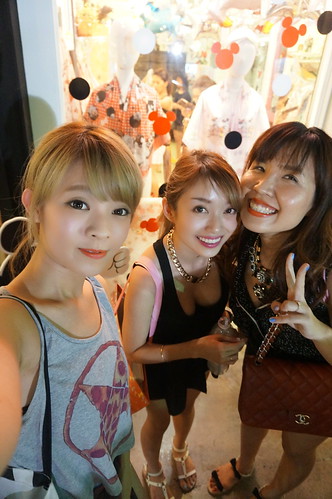 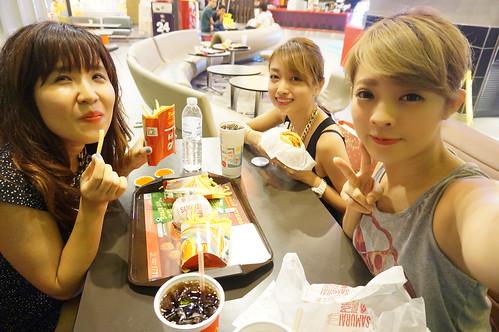 So we ended up eating Mcds near the hotel!  A bit scared when we walk back to the hotel we get shot in the back by soldiers LOLOL.

No la! I think foreign media totally blew things out of proportion.  The situation there was extremely normal.  Besides the 12 am curfew, everything was business as usual.  We didn’t see any violence or gatherings or anything.  Even when on Sunday the train stations were closed due to scheduled riots we didn’t see anything.  In fact traffic was better than normal and we got to our destinations even faster wtf.

So I’d say just keep a lookout for anything dangerous but it’s entirely safe to go if you already have trips booked.