People always assume that Fatty and I have the fairy tale marriage – that we’re always lovey dovey and we don’t fight.

HAHAHA. Don’t make me laugh wtf.  The truth is, we fight like any other couple and that’s totally normal la! In fact, our most serious fights occurred during the first two years of our relationship.

See, Fatty is a romantic sort of guy.  When he was going after me and after we started dating, he’d make all sorts of grand gestures of romance.  Eg. shutting down a shoe store for me, buying a huge ass Hello Kitty doll and rushing all the way to my house to leave it in my room as a surprise… that kind of mushy sweet thing la HAHAHA.

I on the other hand, am damn cold wtf.  I am the man in this relationship.  I like reading romance novels as much as the next girl but when it comes to real life, I just drift through it doing my own thing.  Committing great acts of love never occurred to me.  I expected the standard boyfriend fare – go out with me, spend time together, have dinner that sort of thing but not much more.  I definitely didn’t expect material presents either, so I never thought of reciprocating in any way.

So while he’d do all these big sweet things, I’d feel touched but also a bit overwhelmed and guilty that it hadn’t occurred to me first! Outside I’d be a bit awkward cos I never knew how to react to things like this.  And then after it passed, I’d go back to being in my own world and keep swimming wtf.

So you could say I was like a jellyfish wtf.  I didn’t think about big acts of love but I didn’t think about the little ones either.  The small stuff like getting me a drink, or picking me up or if he couldn’t, arranging for someone else to drive me… all that I took in stride and then for granted.

So the fights started.  Fatty would get upset cos he felt like he was thinking of me, doing everything for me, right down to buying tapau food for us, while I never seemed to lift a finger.  He felt like he was doing all the work in the relationship while I was just chilling wtf.  It was a tough time for us.  At some points I even thought that this would be the issue that would break us up because it was just so damn hard for me to think in advance what he needed cos I don’t even think in advance what *I* myself needed.  (That’s why suay things always happen to me la cos I don’t think wtf.  Not really suay, just lack of preparation for everything.)

But relationships, especially marriage, is a partnership. It’s give and take equally, or at least at a level where both partners are comfortable with.  So I slowly forced myself to change and think differently.  Wah lau always get scolded you won’t change meh wtf.  So I upped my game and he also relaxed his expectations and stopped doing big romantic gestures which pressured me wtf.

Which leads me to Fatty’s 30th birthday party this weekend!

Confirm five years ago I wouldn’t be able to pull this off.  In fact the first surprise party I threw for him? It was a surprise all right.  Cos when he arrived, nobody was there WTF.

HAHAHAHAHAH DAMN FUNNY LA NOW WHEN I SAY IT.  But when it happened it definitely wasn’t hahahahaha. 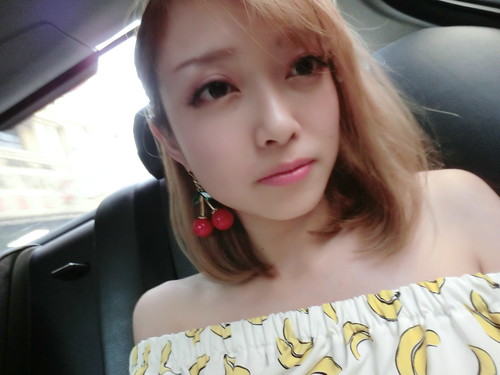 On the way to the party.  We were 10 minutes late and quite a few friends were already there waiting. :X Sorry guys! 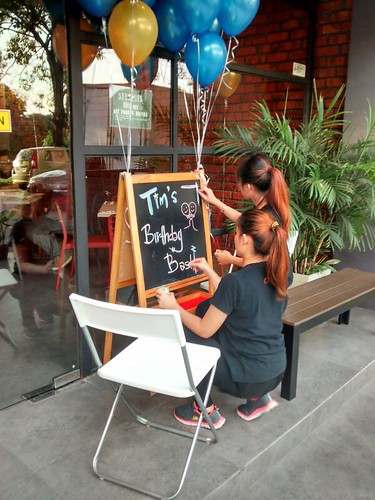 Really liked the effort the restaurant put in to do up the place.  Cos I thought they’d only handle food ma hahaha so I was pleasantly surprised to see they did all these small details too.

We chose the Grind Burger Bar in Section 17 for the venue! We wanted a reasonable place with yummy food which also had nice ambience and was kid friendly (we brought Fighter there all the time)!  You should note that it’s not halal but we really like the food there.  The owners also super accommodating with our party!

(no it wasn’t sponsored.)

Theme of the night was… blue and gold wtf.  Actually I had a tough time picking a theme.  I really wanted to do a Mad Men theme (since we both work in advertising) but too hard la pretty sure nobody will dress in 60s theme… except Bobo wtf.  And Mad Men seems to be about cigar(ettes) and liquor and not very child friendly (we were planning on bringing Fighter).

So in the end I just went with a color theme.  Blue for Nuffnang and Churp Churp. And gold because we Chinese wtf. 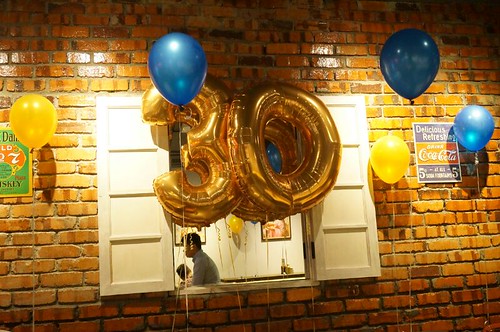 Always wanted giant balloon numbers like these!  I wanted to get the letters TIM too but these are like the most expensive balloons in the world.  One costs RM60. T___________T

Got em from Balloon Buzz if anyone is interested.  Lemme complain about the service a bit.  I’ve been to the Pavilion branch a couple times and always the staff there seems quite lackadaisical and uninterested in doing business one.  Not that they’re rude, they just seem like they couldn’t care less about your business.

Anyway I went there to order the balloons and they told me they didn’t have the number 3 but the Bangsar branch did.  I asked if they could help me order and I’d go pick it up from Bangsar and they obliged.

Cos I know the staff there not passionate about their jobs at all I called Bangsar myself the next day to confirm if there really was an order under my name.  They checked a bit and said ya got and I could pick it up the next day.  So Jammie offered to help me pick them up on the way to the party but when she got there they told her no such order under my name WTF.

Luckily they had stock for the 30 la and pumped it up and gave it to her.  But still!  I already called to double check and they told me got!  And even if don’t have my order but they have the balloons anyway, why can’t they just give JM the damn balloons without making a fuss! Why must they tell her no such order and make us all panick kns. 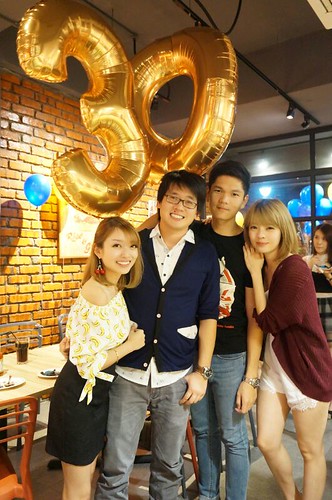 Anyway so much trouble for it plus so expensive better take more pictures wtf.  With our couple friends Jo and Bobo! 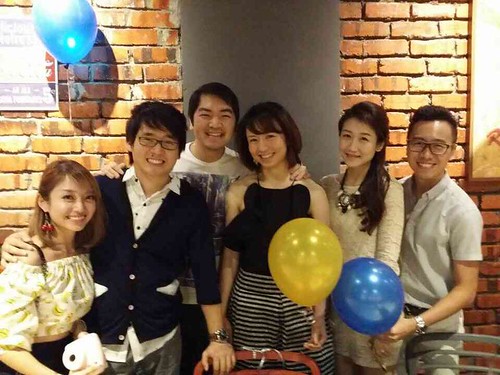 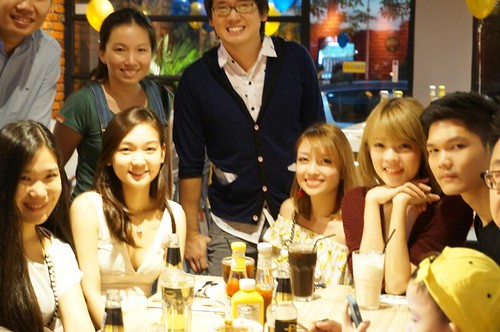 I think we found the worst photographer in the world hahahah.  Asked a staff to help us take a photo and she managed to cut off most of Wai Sun (on the right) and 3/4 of Edmund HAHAHAHA.  And the birthday boy’s forehead! AAAAND the entire thing is blurry! 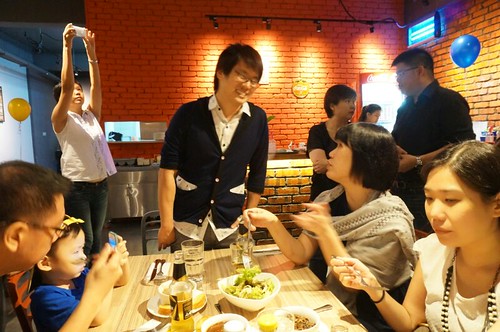 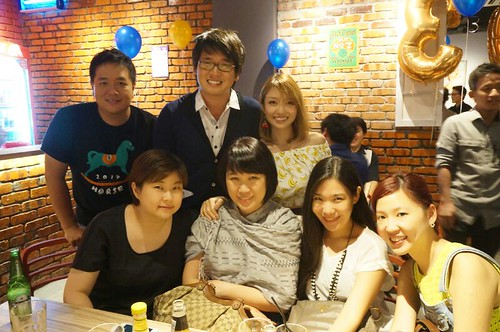 With the media people! Clockwise from top left: Kau Sern, Fatty and me obviously wtf, Wafu, Stephanie, Shelly and Joanne. 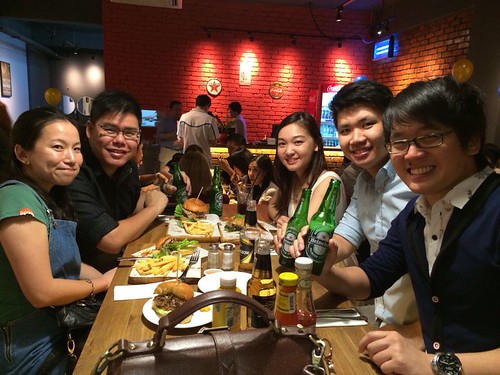 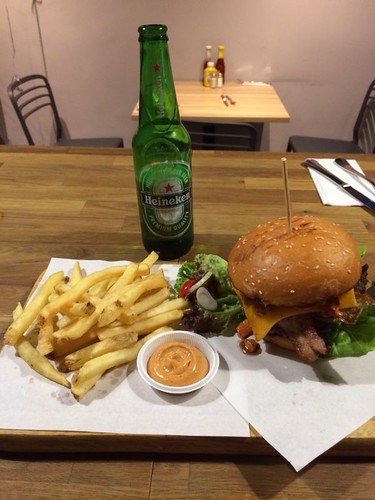 Heineken frequently works with Fatty as an influencer so they came on board and sponsored beer for the party.  Thank you Heineken! And Super Pig for arranging it. 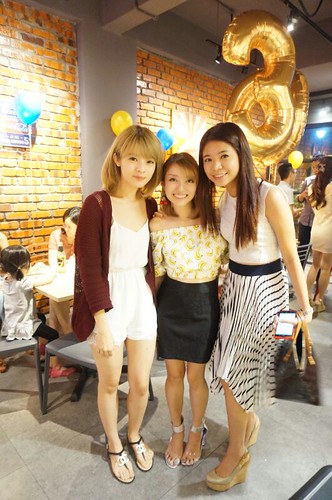 With Bobo and Brenda. Oooh might as well do audfit. 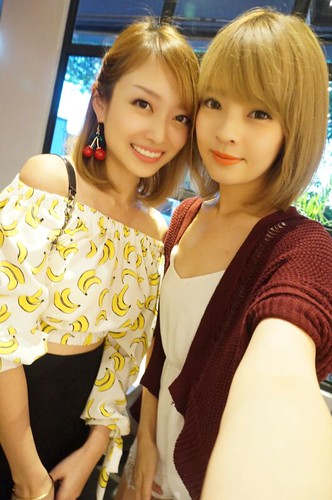 One more with Bobo! 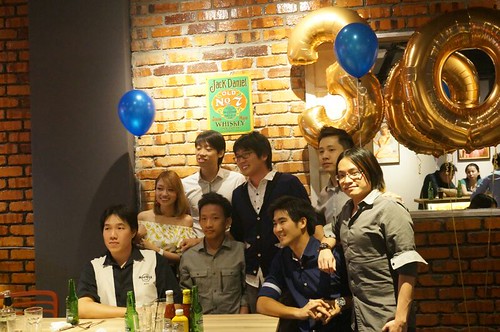 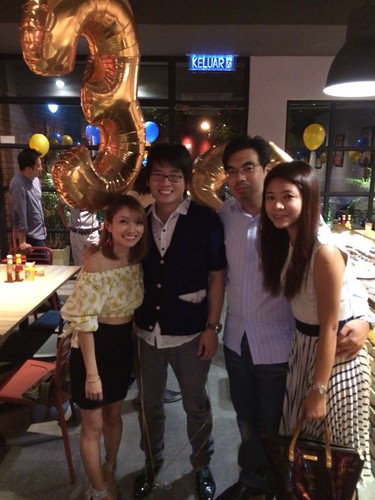 With Brenda and her boyfriend. 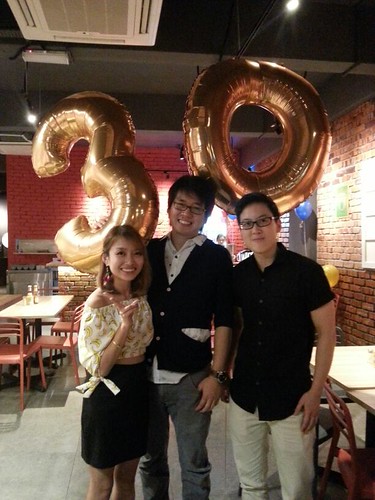 A lot of other people came whose pictures I don’t have.  But thank you all for coming and for making Tim’s birthday! 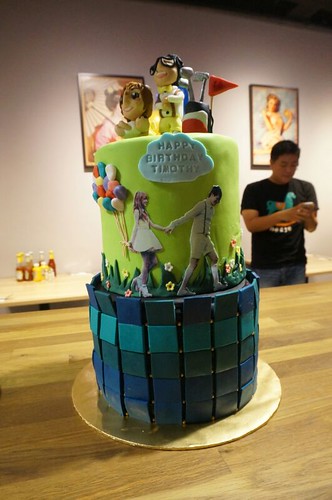 Birthday cake time! I ordered a customized cake from Foret Blanc, a new (I think) patisserie.  First time using them and to be honest I was a bit worried about the outcome cos I also gave them very vague instructions wtf.  I just said it was a 30th birthday cake for my husband and I wanted the cake to have the things he loved – golf, cycling, me and Fighter.

They really put in a lot of research and this is the result! 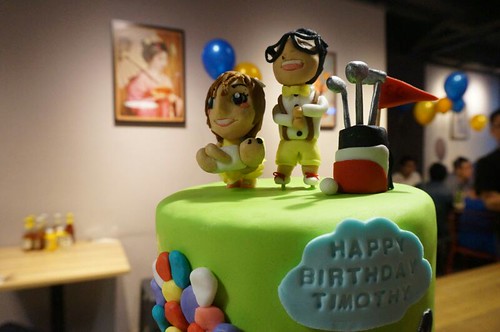 HAHAHA adorable figurines!  Everything made of fondant. Fatty’s is super accurate down to his glasses and mole.  Mine also accurate la cos I really reach Fatty’s shoulder IRL only and my eyes are depicted as huge lol.  But I understand it’s not so easy to capture my beauty like that WTF. 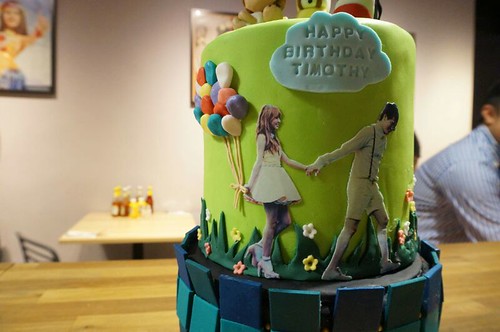 This part really impressed me!  They took the initiative to search for this picture of us and print it out. ^^ 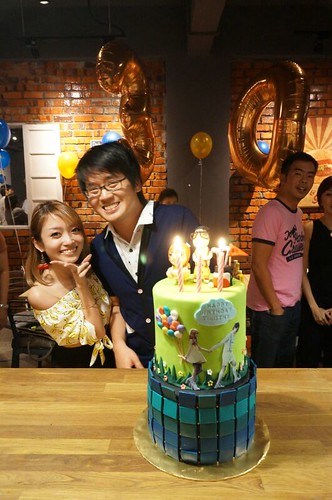 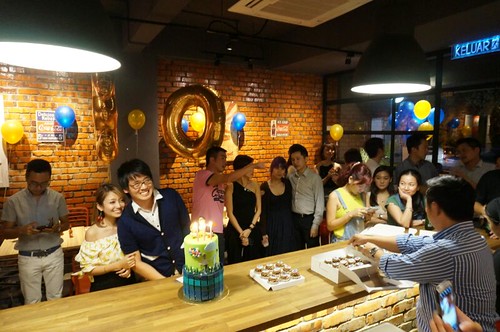 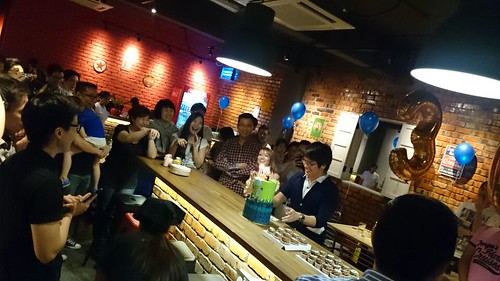 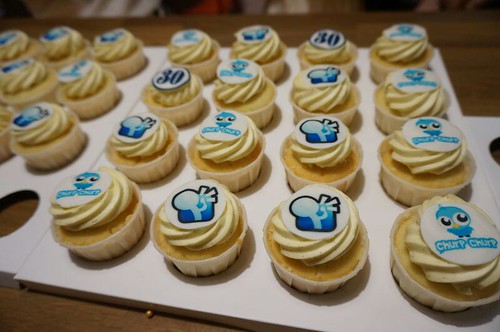 Scared not enough cake to go around so I also ordered cupcakes!  Main cake was red velvet and these are vanilla. 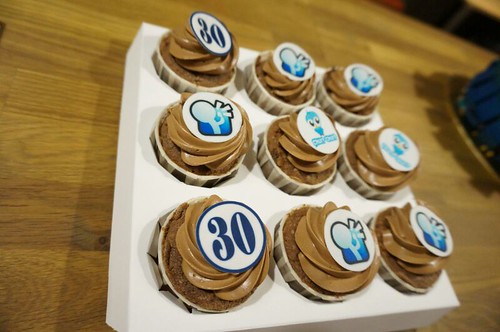 Ooh and this is my birthday present to Fatty.

Nearly all his friends called me and asked “what do you give a guy who has everything?”

HAHAHAH. No la it’s a very real dilemma.  Even I have trouble finding things to buy him cos he ALWAYS buys whatever he wants the minute he wants it. -_-

And whatever he wants and doesn’t have, for sure I cannot afford to buy it anyway. 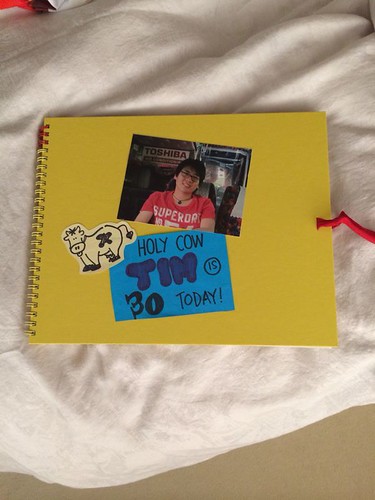 So instead of competing with money, I made him a scrapbook. 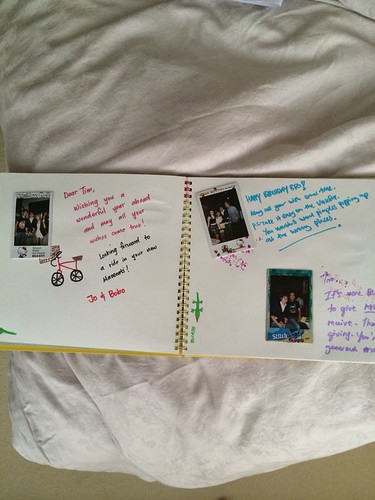 And during the party I ran around taking Polaroid pictures of everybody there, and getting them to pen messages to him next to their photos.  That way for the rest of his life, he gets to keep a physical memory of his 30th birthday party, his friendships at this point, and what his friends had to say to/about him.