Ode to my grandparents

To the man who drove us to and fro from kindergarten every day.

To the woman who cooked mushy porridge I hated and who would have to run after me with a bowl and spoon every meal.

To the man who loved Manchester United and watched every game until his death.

To the woman whose way of showing love was by asking if we had eaten.

To the man who pat me to sleep at night.

To the woman who sewed our pajamas and pillow cases.

To the man who played mahjong every Sunday and cussed like a sailor when he was losing.

To the woman who cooked up a storm of our favorite dishes whenever we went back to Penang.

To the man who walked down the street to buy me koay teow th’ng.

To the man who recorded all the 5.30 pm cartoons on video so we could rewatch them over and over.

To the woman who had to sit behind in the backseat between my brother and my cousin just so they wouldn’t fight.

To the man who loved all technology German (I never found out why) and kept a pristine Volkswagen Beetle with no aircon inside but a tiny fan on the ceiling, which he’d drive himself and his wife to the market in.

To the woman who spoke no other language besides Cantonese so we had trouble communicating.  To the woman whom this did not faze – she prattled on to us regardless.  Always asking us if we had eaten, if we wanted drinks, more coffee, anything she could give.

To the man whom my brother and I were so afraid of losing to his smoking habit, we made picket signs and staged a No Smoking protest.  We replaced his cigarettes with candy, not knowing he was diabetic wtf.

To the woman who spoke the loudest in Hakka whenever she was talking on the phone to her relatives.

To the man who made up the most elaborate stories to tell us.  And they all invariably involved poop or fart jokes for some reason.

To the man and woman we served tea to every Chinese New Year.

To the man who had such a big heart helped anyone he could, and as a result, was mourned widely at his funeral.

To the man and woman who took care of me and my brother on weekdays, bathing, feeding, clothing us, sending us to school, while our parents worked in KL.

To the man and woman who picked us up on the weekend to give the other grandparents a break, who took care of us each weekend and let us play to our hearts content.

To the man who had a heart attack at home when we were in Thailand for a holiday.  We never got to see him before he went.  He had quit smoking but it was too little, too late.

To the woman who cried for two years after his death.

To the woman who fell down and then developed dementia.  From slowly forgetting our names and faces, she started to forget how to do things for herself.

To the man who would get irritated at his wife’s deteriorating memory but agonized when she was hospitalized.

To the woman who, despite having dementia, when she knew her husband was coming home from the hospital, asked for a comb and a mirror so she could beautify herself before he saw her.

To the man who as soon as he was able, asked to go home from the hospital because he wanted to see his wife.

To the woman who said she would be happy when she passed because she would meet her husband again.

To the man and woman who still held hands after 70 years of marriage.

To the men and women who raised their families to the best of their abilities despite poverty and strife.

The last of my grandparents – my paternal grandmother, Mama – passed away last week.

This post is in memory of my four grandparents.  Not to think about their deaths but to reflect on the impact of their lives.  They weren’t famous or extraordinary, but to us, they were great people who left behind a legacy.

My grandfather on my mom’s side.  We called him Ah Kong.

And this was his wife, my grandmother.  We called her Por Por.

This is my dad’s mother who passed away last week.  We called her Mama.

In the center is my dad’s father.  We called him Yeh Yeh.  Not many photos of him because he died before social media was invented wtf. (Guess which one I am!)

My Ah Kong at our wedding.

Mama during one of our family gatherings.

Mama during our ROM.  (She permed her hair for the occasion)

Ah Kong and Por Por.  They had just reunited after Ah Kong spent five days in the hospital.

Shortly before Ah Kong passed away. 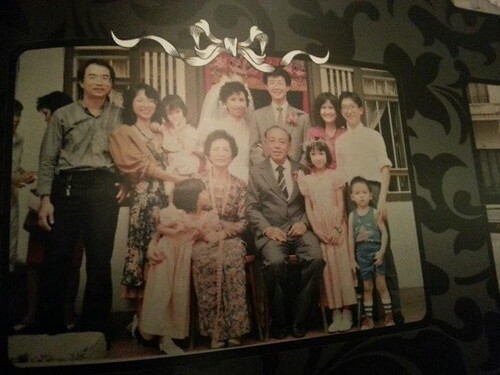 This photo was taken 26 years ago!  At my aunt’s wedding.  I was four and Ooib chose the wrong time to scratch his balls. *shifty eyed

Rest in peace, Ah Kong, Por Por, Mama and Yeh Yeh.  You will not be forgotten.