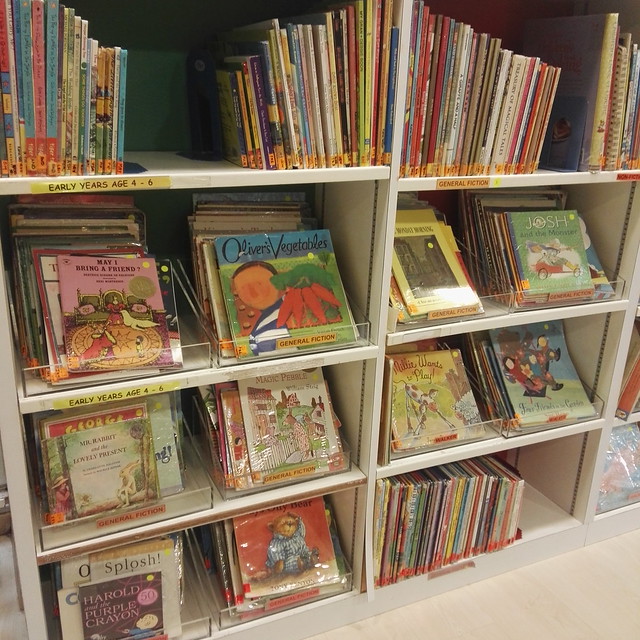 This week is Book Week at Fighter’s school. Which means the main focus is reading.

Every day a parent volunteer will come in and read a story to the class.

Well guess who got roped in yesterday wtf.

Cannot be too long (or else they lose interest), too short (or else kena judged by teacher for being lazy), must be easy enough to understand (or else lose interest again), hopefully a lot of sound effects and weird voices for that exciting factor wtf.

And worse, kids are the toughest audience!  Cos if they don’t like something they won’t give face one wtf. Very stressful ok hahahaha.

Anyway I went in to Story Time all prepared with Goldilocks and the Three Bears. Only to be informed that they JUST read it FML.

I had to faster change course to the Three Little Pigs, which I hadn’t rehearsed at all FML. My wolf voice not very on point but I think I did ok la. Nobody booed me wtf.

Teacher asked if anyone had questions for Jude’s mommy. And Chase asked me a very important, soul stirring and relevant question.

Very good question Chase. As everyone knows, any story that matters needs to have a fire truck in it. Hahaaha Hahahaha 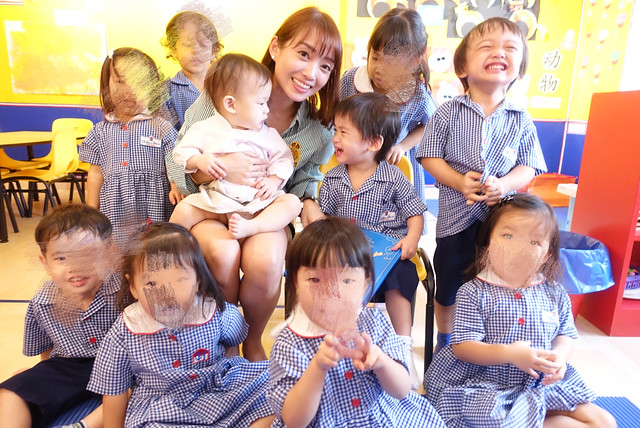 Here’s a group photo!  Sorry had to blur out the kids faces to avoid getting killed by other parents.  Didn’t blur out Chase’s cos his mommy Sieu Ee posts his pic anyway hahaha. And his photo face is too funny!

Oh and if you’re wondering why Fighter is crying, it’s cos he’s mad Mochi gets to sit on my lap. *strained smile

Anyway for the grand finale of Book Week, the kids had to come dressed today as their favorite story book character.

My problem is Fighter only very recently got into stories – his attention span finally lengthened enough to sit through a whole story and understand it; before this his books were all like pop up or flip books about letters or numbers or animals.  No storylines!

So he hasn’t developed any favorite stories or characters yet!

And Peppa Pig Mickey Mouse etc cannot cos they don’t originate from books. The point of this exercise is to encourage love of books and reading.

So as a sneaky mom I purposely read the same story to him every night for a week wtf. My staple Goldilocks and the three bears 🐻🐻🐻

I obviously brainwashed him enough because he fell in love with it! He actually started asking me to read it to him every night.

So I went ahead and made his costume.

Gave him the choice of papa bear, momma bear or baby bear and he picked baby bear. 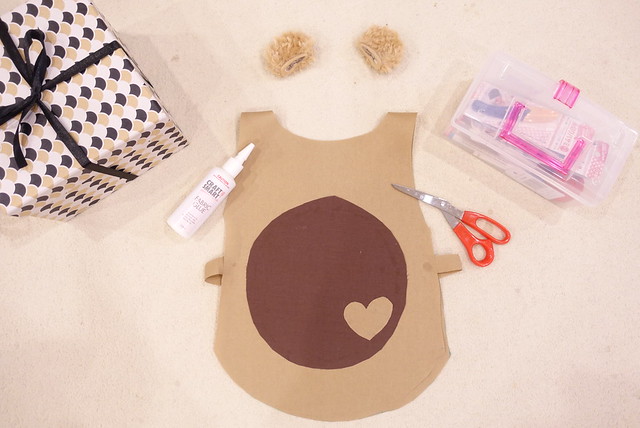 Ok it looks like sai la I am aware hahahahaha.  Sent this photo to the Competitive Aunties and they asked me why is it made out of paper FML. But in case you want to make a half assed bear costume like I did, here’s how.

And you’re done!  I paired the bear ‘suit’ with Duffy bear ears I got from Disney Sea. 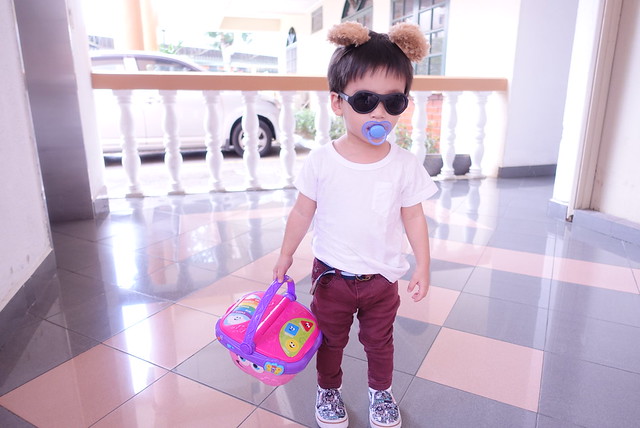 Baby bear up from his nap and going to school!

Accessorized with Duffy ears, a picnic basket stolen from his sister and a pacifier wtf. 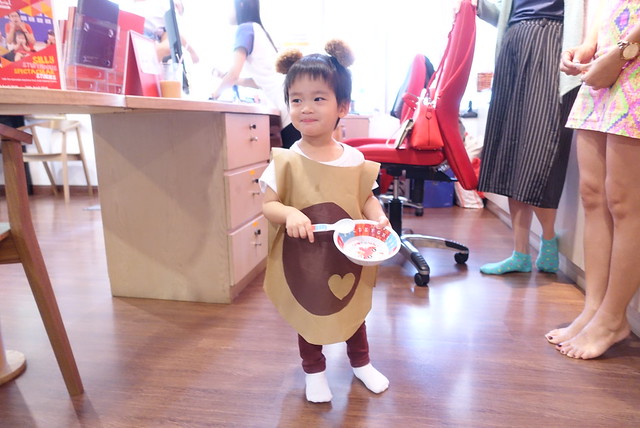 Here’s Baby Bear in his complete outfit!  I added the bowl and spoon cos Baby Bear likes porridge what hahahaha.  Note the bowl is empty cos Goldilocks ate all his porridge. *realistic 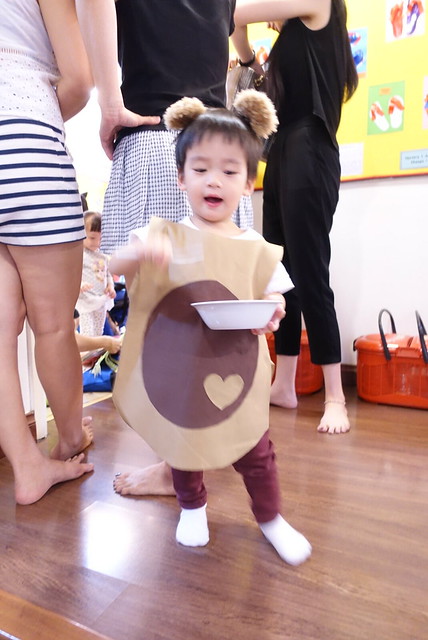 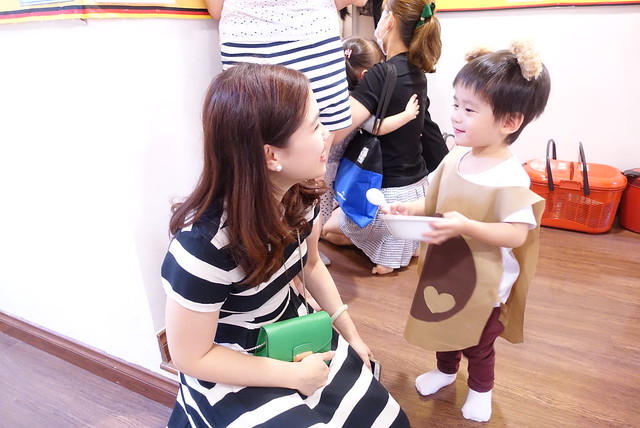 And offering some to his favorite Auntie Sieu Ee. 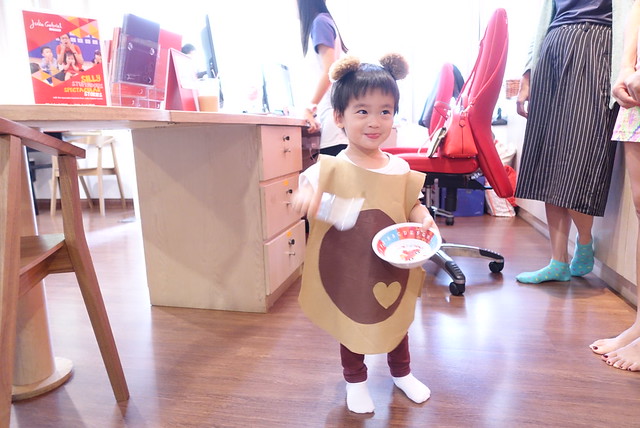 My baby bear!!!! The costume is really quite sai but he still looks cute la right hahahaha. Its super half assed compared to the princesses and Cowboys and dinosaurs that the other kids were. I think most people just bought outfits but I’m too kiam to spend on a costume he’ll only wear once!!! 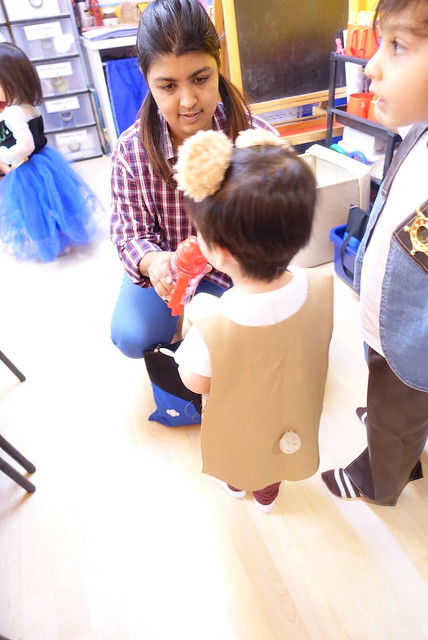 Fighter Bear also has a tail!  Got the pom pom from Spotlight and glued it to his butt hahahaha. 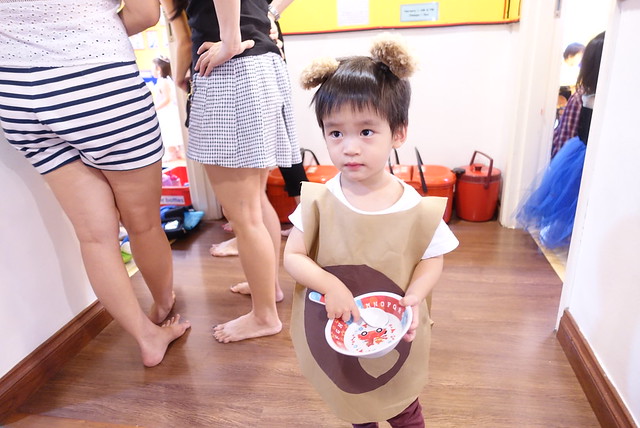 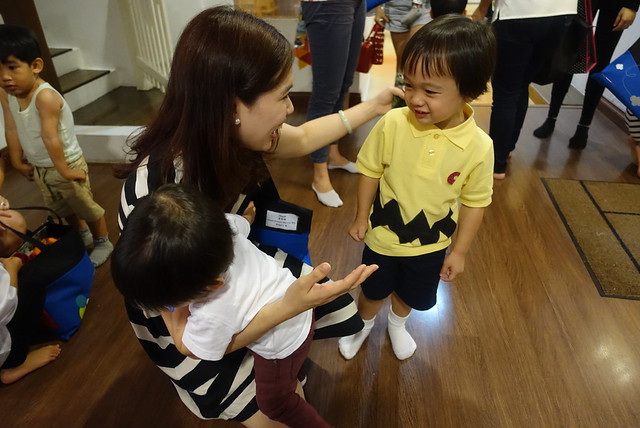 And here’s a photo of Sieu Ee and her son Chase (who’s Fighter’s best friend) and Fighter hijacking his friend’s mom hahahaha. 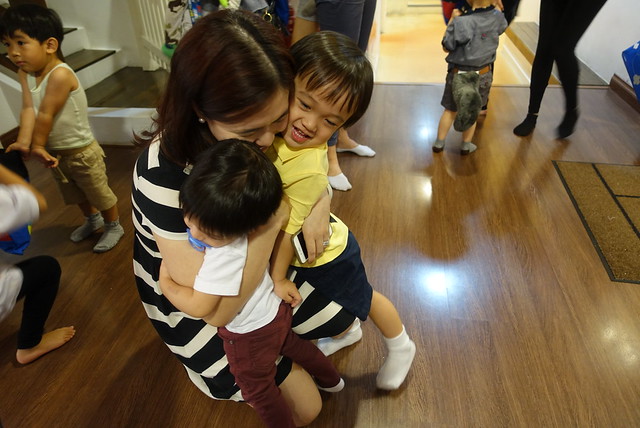 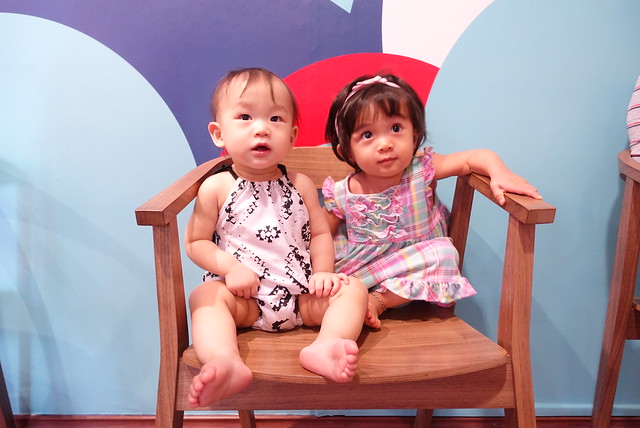 And love these two little girls.  Who came to support their big brothers.  Mia, Chase’s sister is only two months older than Penny but she looks like a little girl while Penny still looks like a baby hahaha.  Must be the lack of hair wtf. 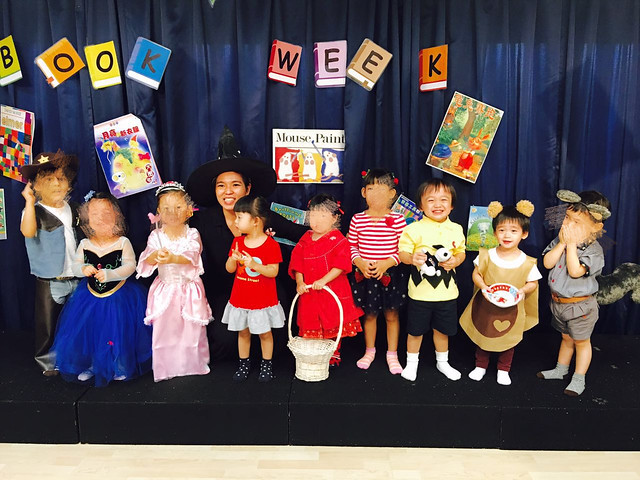 Because during assembly they had to go up onstage class by class.  Each child had to tell the audience (super scary for a two year old leh!) who they were dressed up as and from what story hahahaa.

There’s a video but I’m not posting it to protect the other kids’ privacy.  But basically when it was Fighter’s turn, this is how it went.

Teacher: Jude! Who are you today?

Teacher: No, who are you dressed up as?

Teacher: Ooh a bear!  And what story are you from? What book are you holding?

Fighter: Goldilocks and the three bears.

Teacher: Very good! And what do you have in your hand?

Teacher: But your bowl is empty! What happened to your porridge?

Teacher: Oh no!  Who ate your porridge?

Fighter: My mommy ate my porridge.

Anyway I was so proud that Fighter carried himself so well and answered confidently and accurately.  He didn’t shy away or cry. 🙂

Also very happy with the way the school handled Book Week.  Ya I was damn stressed la wtf but I like how our school in particular emphasizes reading and books to such a degree.  Because above all, the love of reading is what I’d really want Fighter to develop as a young child. 😀