So a few days ago, the kids were playing in our living room and Penny was pushing around this stroller. 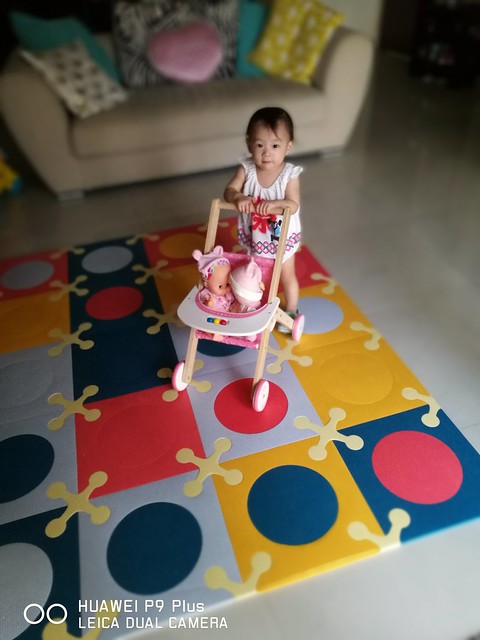 Just when I glanced away, Fighter snatched the stroller from her. -_-

Thus ensued a full blown tantrum from Penny of course. I quickly made Fighter hand over the stroller but too late, Penny was deep in the throes of a meltdown. And when Penny is in a meltdown, nothing can calm her. Give her twenty seconds or so, she’ll let everything out of her system and then she’ll be fine, as though nothing happened wtf.

So I just held her tight, waiting for her tantrum to blow over. She flings herself around during a tantrum (-_-) so I didn’t want her to hurt herself. So she was flailing about and in her anger, her little palms smacked me on my shoulder.

Tantrums I can accept, but hitting I cannot abide. So I said sharply, “Penny, no hitting.”

Suddenly, Fighter’s – who was watching the proceedings with interest – face changed. His head drooped, a frown creased his face and his mouth turned into an upside down U wtf. Inside my head, I rolled my eyes wtf. Great, Fighter (who can be super sensitive) probably thinks I’m scolding him too and now I get another toddler to console.

Fighter advanced towards me, who was still sitting on the floor holding a struggling Penny. He held out his hand.

“Did Penny accidentally hit you, Fighter? Where pain pain?” I reached for his finger and pretended to rub the pain away.

In a weepy sort of voice, he said, “Here.” And he put his hand on my shoulder.

I watched in surprise as he said again, very worriedly, “Mommy pain pain here. I rub for you.” And using his index finger, he rubbed my shoulder where Penny had struck.

I thought he was putting on an act to get attention from me while I was tending to Penny. In actual fact, he was troubled when Penny hit me and he was trying to rub away the pain, like how I attend to him when he has a fall or hurts himself.

My almost three year old has so much empathy, much more than I gave him credit for.

With my free hand, I took his little toddler fingers in mine, smiled at him, and told him, “Thank you darling. Mommy no more pain.”

In other news, here. A vlog hahaha. Haven’t done a daily vlog in a while and the kids have actually developed so much since the last one! Watch and you’ll see how Fighter is speaking now and how much Penny is interacting with us (without words wtf)!!!!