This week and a half (and more to come wtf) has been madness for me with our house moving, but we took a break to have lunch with some very interesting people.

Nawal and her ten year old daughter, R, are refugees from Iraq.  We met them as part of an initiative by the Picha Project, a social enterprise whose main aim is to empower marginalized communities in Malaysia, specifically refugees.    In an effort to raise awareness about refugees in Malaysia and their plight, and to give us Malaysians and refugees a chance to get to know each other, the Picha Project organizes (weekly I think?) lunches hosted by the refugees in their programs, at their homes.

I honestly don’t know much about the refugee situation in Malaysia but I’m kepoh and I like people wtf.  So when Fatty told me about Picha, I said let’s do it wtf.  And I roped in two other people I knew would be up for it – my parents. 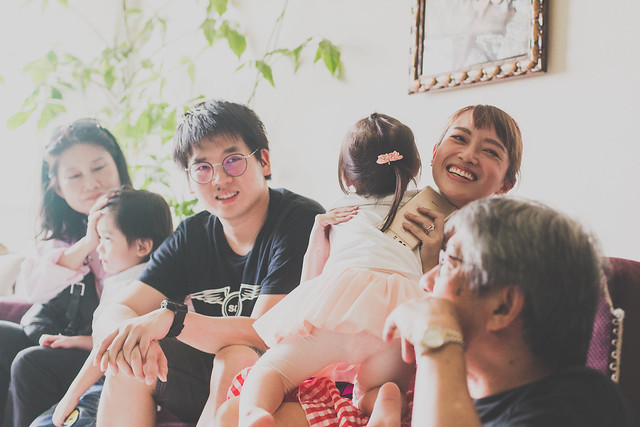 I didn’t know what to expect but when we arrived at Nawal’s flat which she rented with her brother and his son, we found a tiny but spotless and carefully decorated apartment.  Nawal had created a home – there was a money plant with its vines pegged on the wall, various decorative items set out in precision on the shelves, even a princess doll. 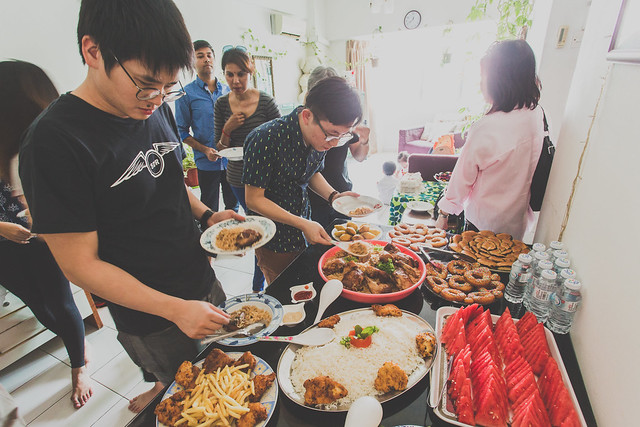 The spread Nawal had prepared for us. :O

When we arrived she was still cooking in the kitchen.  Cos her head was uncovered we wouldn’t see her…until she climbed through the window to her room to shower and change. O_O 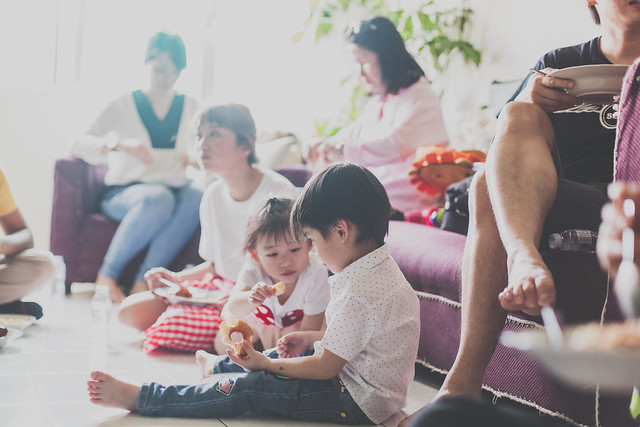 Critters digging in.  Penny naturally went for french fries hahaha. Fighter headed straight for the rainbow sprinkle donuts which were made by R! 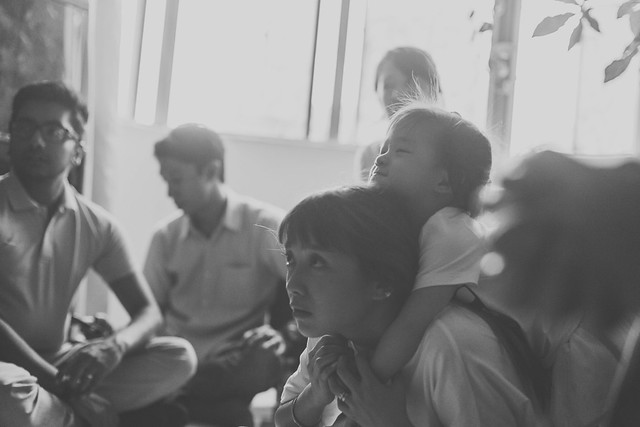 Nawal told us her story through halting English and Google Translate.  The refugees I know about in our country are mostly Rohingya who are marginalized in Burma anyway.  But I was curious as to Nawal’s background so I asked her what she did back in Iraq. She told us she used to be a journalist.  She was an intellectual, not someone running from poverty.  When the unrest in Iraq broke out, her uncle? brother? I couldn’t tell from the translation – was shot and killed.  She was at threat being a journalist, so she took her daughter and fled.  Her family broke up – they all left for different countries and Nawal lost touch with them.  She only found her mother was in Jordan last month I think, after four years of lost touch.

We asked why she chose Malaysia, and she said she’d come for a holiday before and liked it.  So she chose to come here.  When asked if she would make Malaysia her permanent home if she could, she smiled and nodded.  And said simply, “Good place, Malaysia.  The people.”

Meanwhile, while the adults were talking, the kids were doing this. 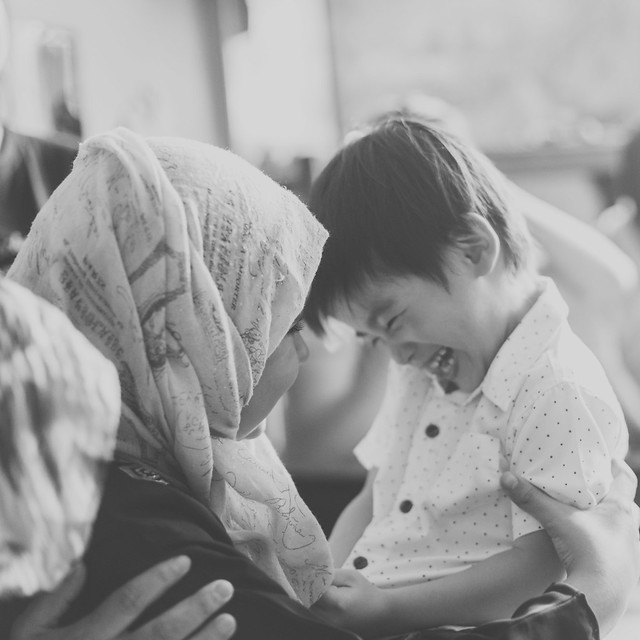 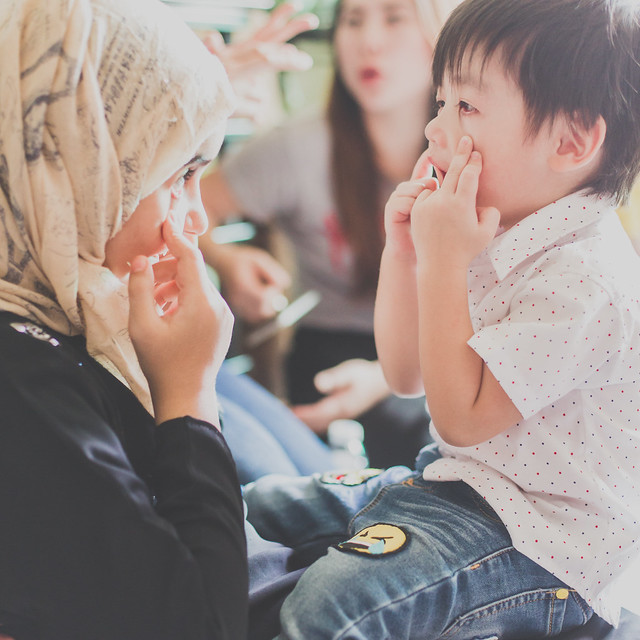 Fighter is naturally very open and loving so I wasn’t surprised he warmed up so quickly to R and Nawal. 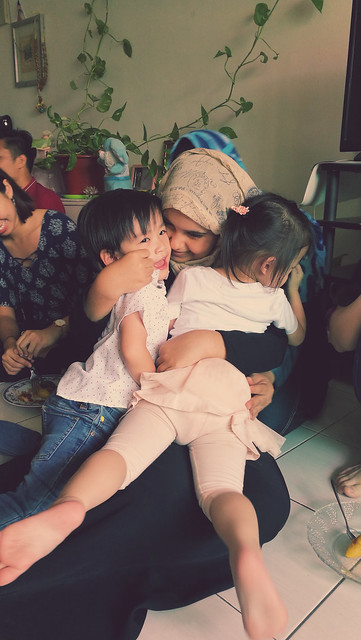 But Penny who’s normally so suspicious of strangers and super unaffectionate with everyone except me, when R beckoned to her, she trotted over and fell onto R’s lap, hugging her.  (Then Fighter FOMO and faster joined in hahahaha.)

Nawal and R are my new heroes.  I don’t presume to know how they feel but… they’d fled their home, separated from their families and are living on the edge.  Life as a a refugee especially in Malaysia is tough – they have no status or rights, and therefore no legal means of earning income.  Yet they are still warm and full of joy.  They opened up their home and welcomed us strangers in and fed us.  What money Nawal has, she still takes some to give to her neighbors who have less.

Penny spent some time playing with R’s princess doll.  When it was time for us to leave, I made Penny give it back to R, only to have R and Nawal press the doll on us. I didn’t want to take things from them when we have so much more so I refused repeatedly, saying that Penny had so many dolls at home already.  We then left and went to the lift lobby to wait for the elevator to go down.

Suddenly R burst in and rushed up to us.  She pressed the princess doll into Penny’s toddler hands and said she wanted Penny to have it.  Fatty started to protest again, but then I stopped him and said thank you.  I think maybe giving us the doll meant something more than simple generosity to mother and daughter.  We – especially the children – had forged a connection and a budding friendship and maybe this was their way of furthering the connection.  And I think accepting the doll means accepting our connection.

Today I bought an Elsa doll (because I told them that Penny loves Frozen and they laughed and nodded) to give to R in exchange.  Our friendship and best wishes in return.

If you want to find out more about the refugee situation here and the Picha Project, here’s their website. Picha works with people like Nawal to create traditional food from their cultures, for event catering as well as home deliveries I think?

Ok that’s all wtf. So glad we went for this and that the critters were there with us. ^^