Remember months ago when I went to register Fighter for kindergarten at the ungodly hour of 2 am?

Well the day is finally here.  School officially starts January 2 so today was his Orientation Day.  The school told us to come with the kids dressed in their school uniforms, and their lunch kit. 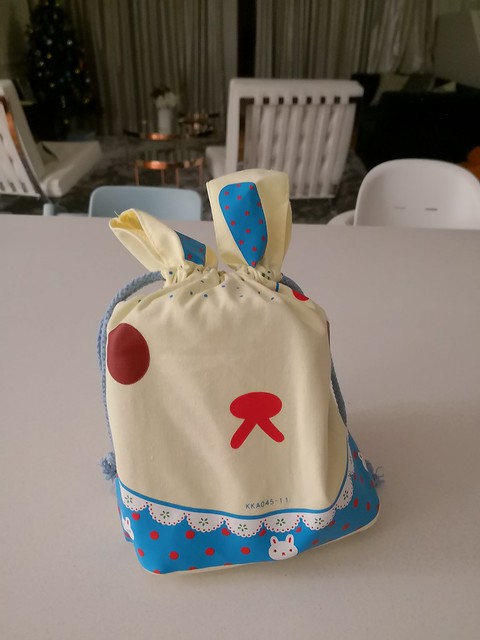 This is their tea kit! Hahahaha damn cuteeee although I think everything in there is from Daiso wtf.  Upon registration, the teachers presented each child with a cloth bag with a small food container, a fork and spoon, a cup, and a towel inside.  They need to bring this with them everyday so I’m assuming it’s part of the school’s syllabus for Independence lol.

The week before I kept reminding him that we have school on Saturday but Mommy would be going with him, and Chase would be there too. He agreed nonchalantly and seemed perfectly fine. 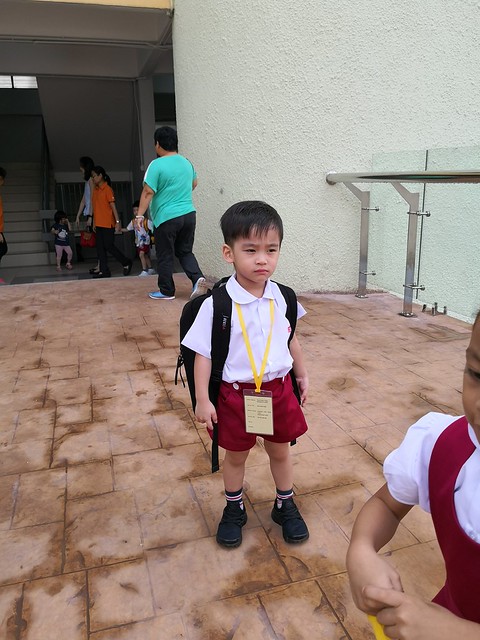 My handsome boy all dressed up in his new school uniform!  He likes it more than his previous uniform cos the sleeves are shorter wtf. #toddlerlogic

He wasn’t really unhappy here – he was trying to act cool LOL. 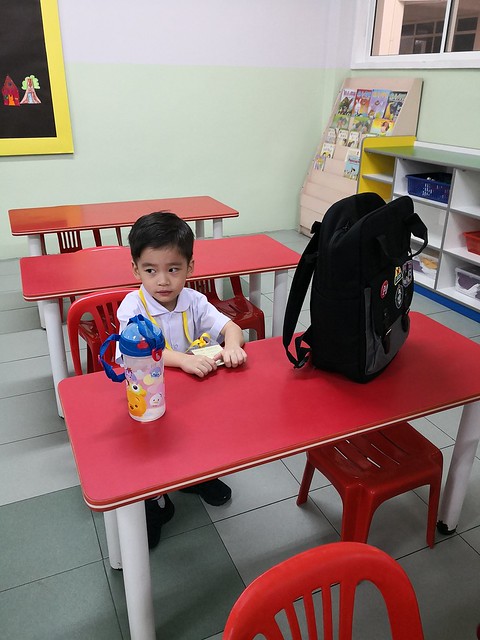 Found his classroom, met the teacher and got some materials.  Then we found a place to sit.  See his backpack is bigger than him FHL hahaha.  At this point he started to get slightly antsy, reaching for my hand as though scared I’d suddenly make a run for it. -_- 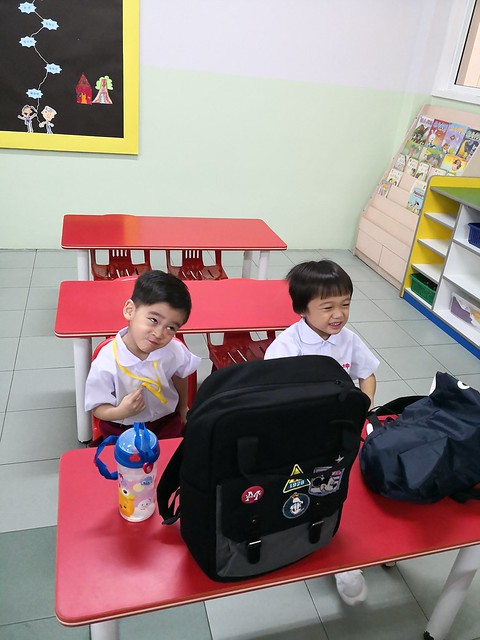 Chase arrived though so all was good for a while….

Both are four year old boys though and Chase would worriedly keep looking out for his parents.  Fighter on the other hand…. without warning burst into tears. O_O

Between sobs he stuttered, “I want when I’m studying Mommy stay here with me.”  And big ol’ tears kept welling up in his eyes and dropping down his cheeks. T3T

I had to carry him out of the classroom to calm him down.  I don’t even remember what I said cos I was just trying out telling him different things and one of them happened to work wtf.  He calmed down enough to accept that when school starts proper, I wouldn’t be around but I would be waiting to pick him up after school.

After that the teachers asked all parents to step out of class.  I assured Fighter I would stand right outside his classroom and he could see me through the window.  He started crying again but by the time I got to the window outside he had already stopped wtf. 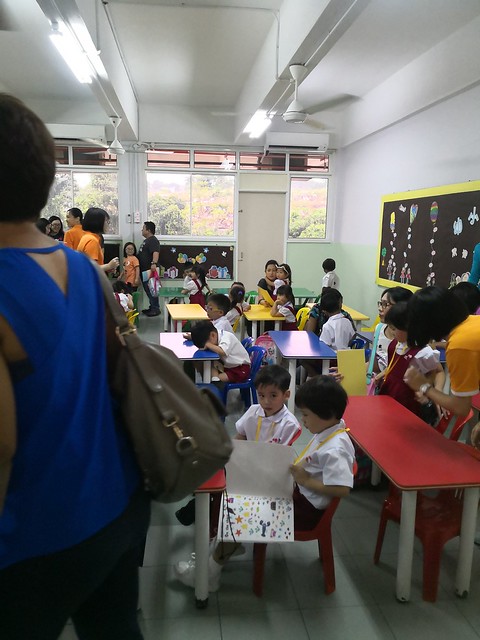 Watching me carefully to make sure I’m paralyzed and stick to the window wtf. 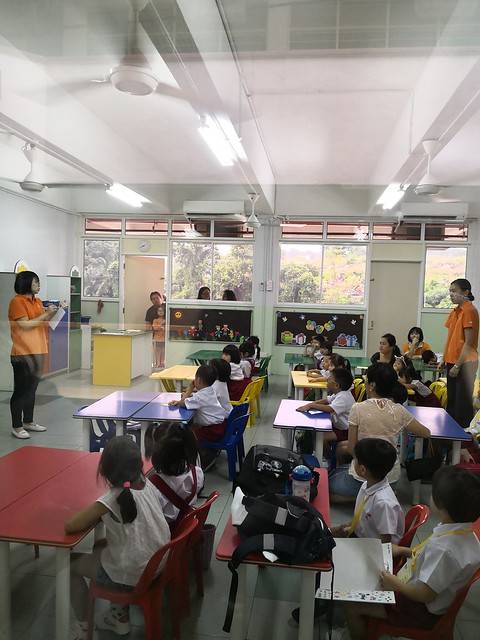 Then orientation started!  Couldn’t really hear what teacher was saying, but she was probably explaining basic rules.  Then they got the boys and girls to line up separately, and ushered them all to the bathroom to wash their hands. 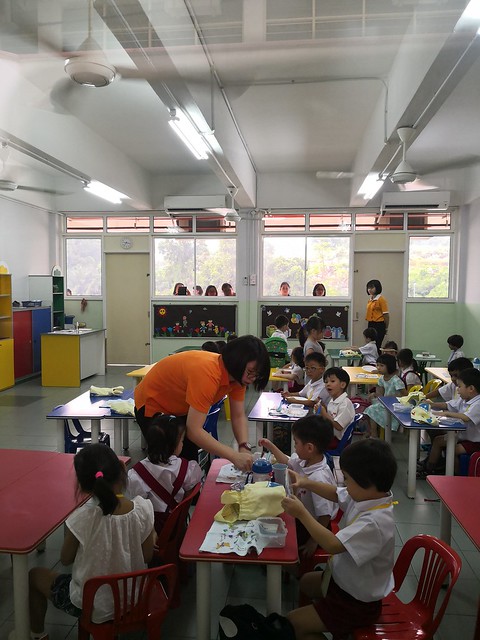 Teacher teaching them how to open their tea kit, remove the utensils, and pack back everything again lol. 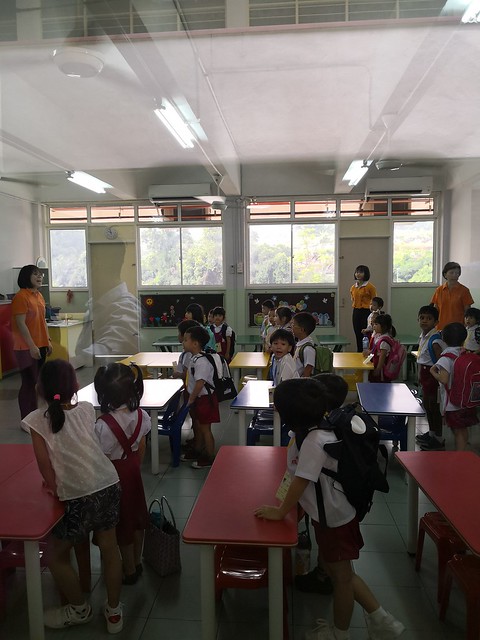 Time to greet the teachers bye and go home! 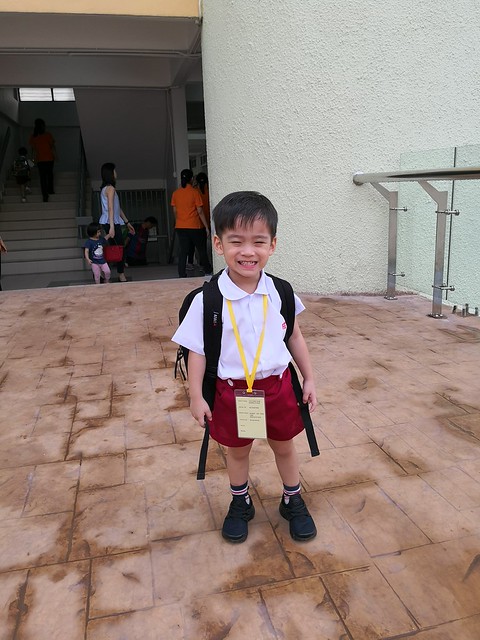 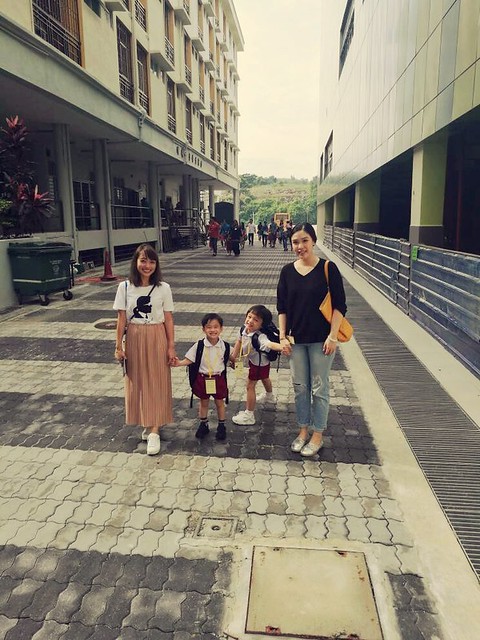 Tomorrow is the first actual school day though – he will be going in to school and classes will commence proper. 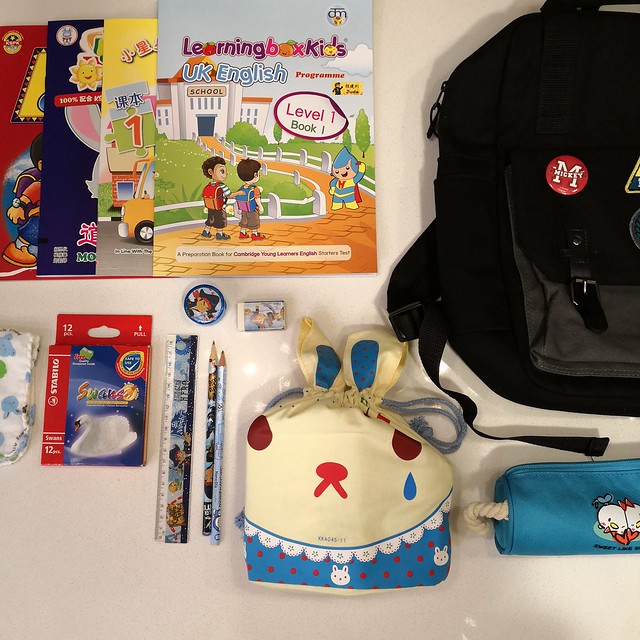 Packed his bag tonight!  Sharpened his pencils, labeled all his stuff and wrote his name and class on his books.  Prepared his tea kit, his pencil case with stationery, even put in some color pencils, and a required handkerchief to go into his pocket haha.

edit: Adding this on because the day after, Penny started school too!  She’s been going to an independent play program since before she turned two but this year she’s turning three and due to start nursery! 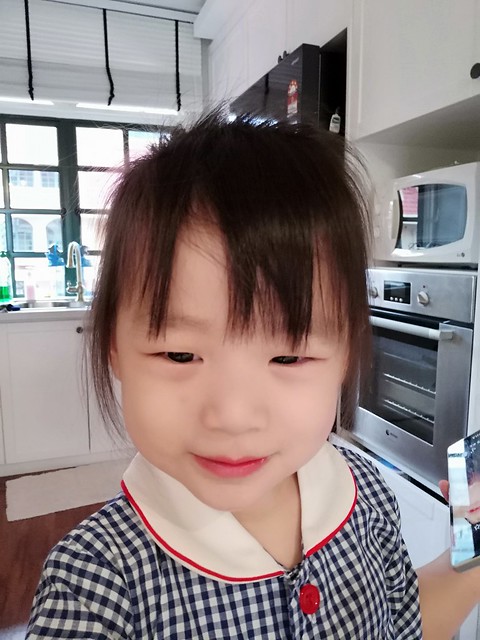 This is my big girl, super proud of herself and taking a selfie dressed up in her school uniform.  She was soooo excited about her school uniform btw.  The day I brought it home, she insisted on putting it on already lol.  And the first day of school was actually PE day which meant the kids should wear their PE outfits.  But this girl wanted to cry when I took out her PE uniform….. so she was the only kid in class wearing this uniform while everyone else in PE clothes lolol. 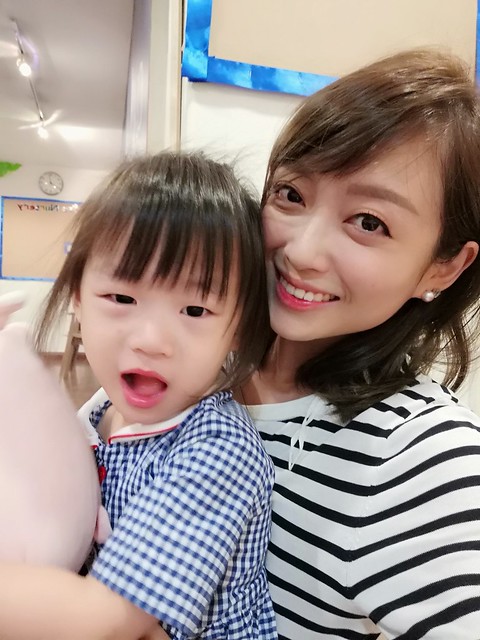 While waiting for school to start….

Penny is used to being dropped off and fending for herself in school.  But this is after all, a new school, with new teachers and new classmates.  I wasn’t sure how she’d react and I steeled myself for the worst wtf. 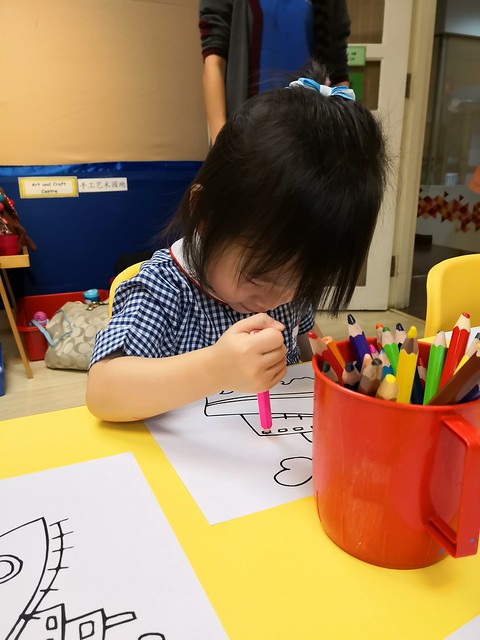 She was totally fine.

Here she is, coloring before lessons start.  Totally happy in her new surroundings.

After a few minutes, I crouched to her level and said, “Penny, mommy is going to the market now okay? I’ll come back to pick you up when school finishes.”

She nodded and waved her hand dismissively at me WTF. 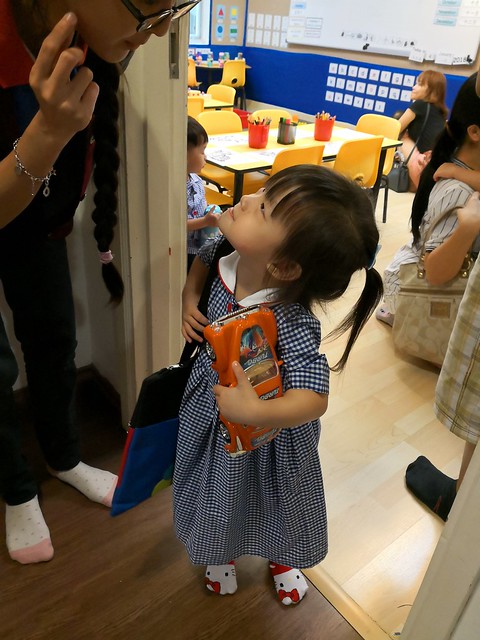 Pick up time.  She’s been doing super well la!  The first two days, teachers told me she cried during the second half, after snack and playground time wtf.  Maybe she cried cos all the fun parts are over wtf.

No la I think she cried cos she was tired already.  Her two year old school was only two hours long and she has to adjust to longer school hours. 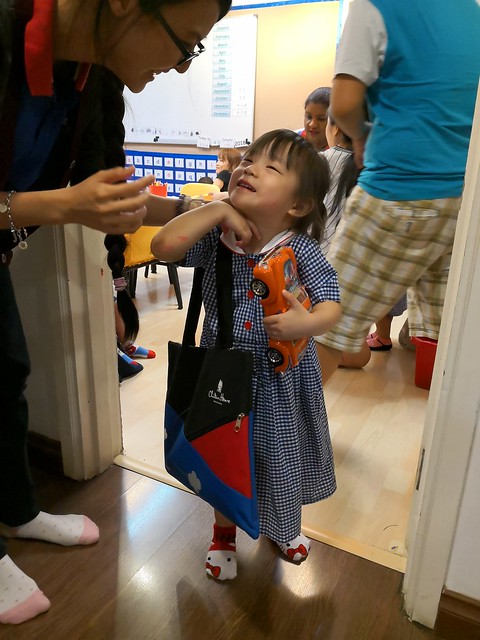 She also really likes her laoshi so I think that’s a huge plus!  Her laoshi only speaks Mandarin to the kids and Penny doesn’t understand a word of Chinese wtf.  Once we were playing hide and seek at home and Fighter was in a Mandarin speaking mood wtf.  I was hiding and I could hear him call out, “Wo mama zai na li?”.  And apparently Penny ran along side him and asked, “Koko. What you saying?” Hahahahah.

But when laoshi spoke to her in Chinese, Penny was nodding along as if she understood everything LOL. 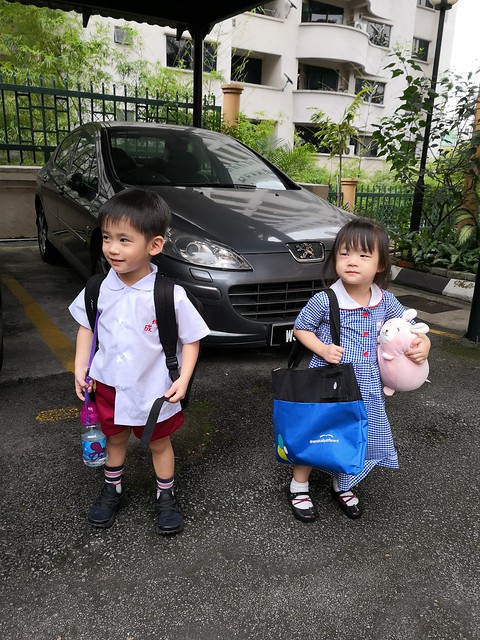 So that’s both kids’ first days!  So proud of them that they’re so big and independent now.  From the second day onwards, Fighter now walks in to school on his own after I drop him off at the school gate.   Penny waves bye to me calmly every day and goes about whatever business almost three year olds get up to in school wtf.

On the other hand, I have no helpless babies anymore. BRB crying in the corner.