So here we are.  It’s mid March and it’s nearly the end of the first term of school. *puts face in hands and weeps

Time, why you pass so fast!  Fine lines, why you come!  Baby, why you grow up so fast! 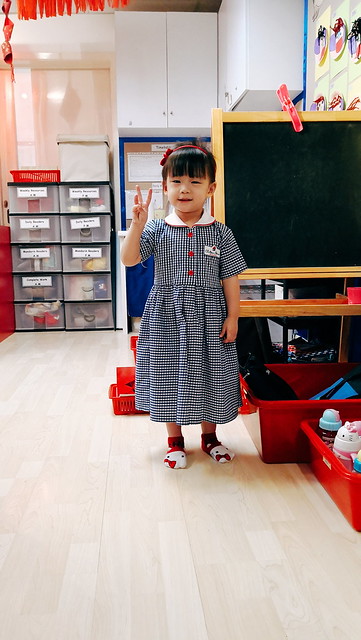 This baby thinks she’s doing a peace sign but the truth is she can’t maneuver her fingers well enough yet so all her peace signs are three fingers HAHAHA.

Which is apt because she’s turning three this week!

It’s also the end of the first term of nursery for her and kindergarten for Fighter and last week, I had the first parent teacher chat with her teachers.

I always update on Fighter’s progress — aih what to do first child syndrome wtf — so here! I am determined to document Penny’s development as much as possible too. 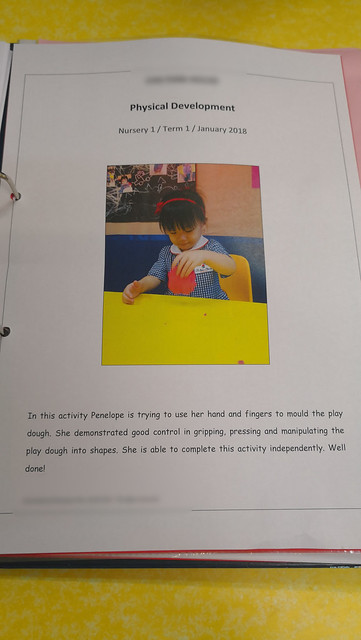 Ah this I know already la wtf.  She manipulates small objects so well at home and wields a spoon and fork with ease until sometimes I’m surprised if she can’t do something herself. 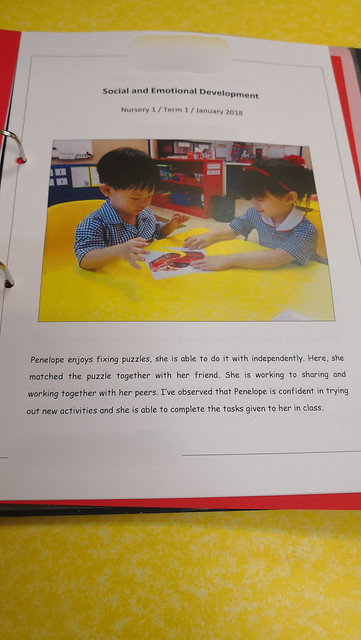 Hahahaha this one is her problem area wtf.  When she first started school apparently she was super unfriendly to all her classmates lol.  She basically ignored everyone except the teachers and had problems sharing; when her friends wanted a toy she liked, she’d stare them down or cry hahahaha.

I told her teachers yea she has that problem at home too wtf.  Just as I typed this, I remember looking up this afternoon and seeing Fighter and Penny, standing side by side behind a doll stroller, both grasping the stroller handle.  Fighter had a look of anguish and he was trying to bump Penny to the side so he could push the stroller too LOL.

And Penny? Penny was gripping the handle with her jaw set, staring straight ahead LOLOL.  She had her feet planted wide and firm for extra stability and she wasn’t budging hahahahaha.

Well at least she’s learning at school to take turns and share now. -_- 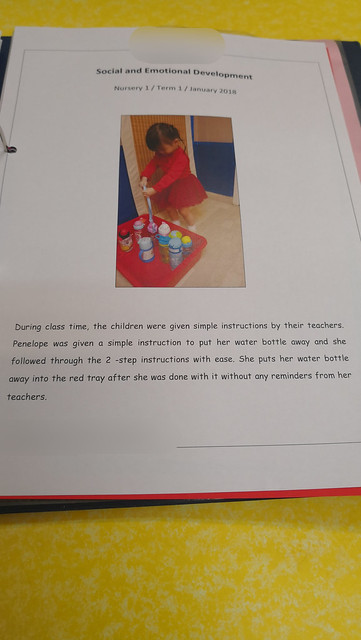 This one also no problem.  She totally understands instructions.  E.g., at home I make her throw rubbish for me, fetch things for me, and even wash her hands at the sink herself (while standing on a stool she’s positioned herself), put soap and rinse, then climb down and wipe her hands on her own piggy hand towel.

So she understands instructions.  Only whether she wanna follow it or not wtf. 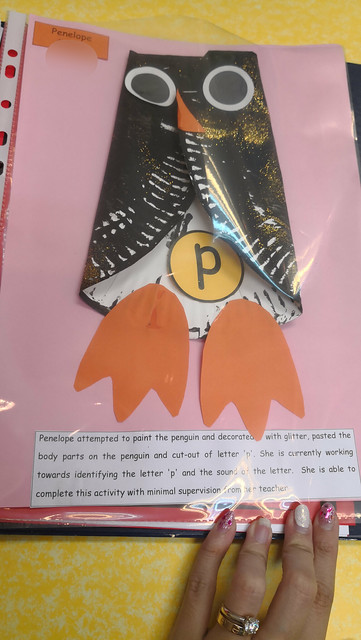 They were learning the letter P (coincidence her name!)  (although now she identifies ‘b’, ‘d’ and ‘q’ as ‘P’ too hahaha) and made this penguin.  Hers is nearly perfect leh!  Teachers said she refused any help, instead studying the sample penguin then slowly and methodically pasting the body parts in the right positions. 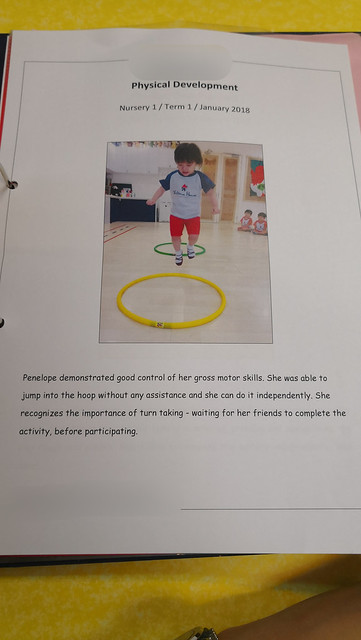 I’m not worried about her gross motor skills at all – she can paddle around (with floats) since last year, rushes around on a scooter and I’m pretty sure she’ll learn to ride a bike before Koko wtf.

Toddler skills aside, I asked the teachers how she was doing.  This is what they told me.

Apparently Penny is the most independent and mature child in class.  Partly due to being a second child, partly cos of her own character also la.  She’s apparently very neat and meticulous, putting all her things away carefully.  They’re supposed to put their water bottles into a special big container and she always makes sure her bottle strap is stuffed neatly into the box too wtf.  She usually refuses help from teachers, trying to do everything herself until she really cannot.  Then she’ll give up and go to the teachers.

She’s also super bossy, and tells her friends if they’ve left anything behind or didn’t keep their stuff omg lolol asking to be beaten up wtf.

As I wrote earlier, Penny is also very meticulous with her work.  Teachers said she’ll really study the samples given and emulates them accurately.  I love this cos I’m the kind that will anyhow complete a task as long as it’s done wtf.  I love that she puts effort and thought into her work. T3T

She’s  very independent cos she’s aware of the class routine, and automatically prepares herself for each activity without the teacher prompting.  Most of the kids her age don’t  know yet what the routine is even but she already preps herself!  For eg, she loves playground time lol so when she knows the teachers are gonna announce playground, she’ll quickly seat herself on the mat first so the teachers can start applying mosquito repellant on her and put on her shoes hahaha.  And she’ll tell all her friends to do like her so she can faster go play LOL.

And this is the funniest part – she’s campaigning to be class monitor…. or teacher’s pet WTF.  Apparently she volunteers for anything teacher asks for – usually fetching supplies and stuff.  And she’ll plan ahead for it some more hahaha.  Cos she knows that teachers will pick a volunteer who’s well behaved at the point.  So right before they call for volunteer, she’ll faster sit down and act all proper and good so that the teachers HAVE to pick her WTF.  Hahahahahhaha damn stupid omg seriously next time kena whack that kind hahahaha. 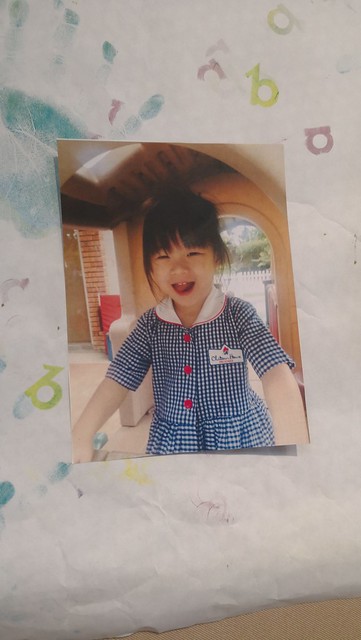 So that’s Penny Lane for you wtf.  She’s settling very well in school la.  She gotta work on her PR a bit more maybe, cos unlike Koko, she doesn’t give a shit what you think as long as she can do what she likes ahahaha.  But she’s apparently made a best friend too.  There is a pair of twins in her class and she’s suddenly BFF with one of them. They sit together all the time and chatter away about god knows what the teachers also can’t tell cos their pronunciation not very good lololol.

She’s only mentioned this friend to me once before though; most of the time she talks about the other girls in her class so I don’t know what’s that about wtf.