PACA stands for Polling Agent/Counting Agent.  I’m not clear at all about how other countries run their elections, but in Malaysia, while the Election Commission runs the general election, volunteers become Polling Agents and Counting Agents to observe the election process and the counting process, and ensure that everything is done as per the law.  This is very important because in the past (and I can speak freely now!), our ruling party Barisan Nasional had been caught with their pants down, pushing in boxes of fake ballots to manipulate the votes, among other dirty tactics.

In March this year, my friend Oy Sim contacted me and asked me if I’d be interested to be a PACA.  She sent me a bunch of links explaining what was required of a PACA and asked me to let her know. Honestly, reading the job scope, I was so intimidated that I wanted to say no right away.  But I held back.  And I whatsapped Oy Sim, “OK I’ll do it.”

I think Oy Sim was surprised cos she said, “Wow! You’re the first person I’ve contacted to reply me so positively.”

What had I gotten myself into?!

I had to laugh at that.  I told her, actually I very lazy to do it but because I complain so much about the government and always ask for change, now I actually have the chance to do something about it, how to say no!?  It’s a matter of principle already.

So I signed up for it, went for training and everything. I volunteered under Maria Chin Abdullah, which means I was a PACA in her constituency of Petaling Jaya, alongside fellow alums from Mount Holyoke.  Oy Sim is a fellow alum too so she pulled the bunch of us in.  I ended up taking on two shifts – the first shift (8-10 am) and the last shift (3-5 pm).  I would also go on to be Counting Agent (CA) for the tallying of the votes that would run from 5 pm until whenever.

Settled her and went back to my room at about 11, thinking never mind I still got 6.5 hours of sleep.  Cos the next day I need to be on constant vigilance ok I need as much rest as possible.

She wasn’t going back to sleep, so I brought her up to my room so at least I could sleep even if she wasn’t.  After a while I dozed off… then she woke me up again with her fidgeting. Oh god.

After I woke up, I couldn’t go back to sleep anymore.  I tried walking around, meditating, drinking a warm drink, even took a melatonin pill.  Nothing worked and I think I had maybe two hours of sleep that night.

The next morning, I was pumped though!  I thought for the first time in my life, I thought I’d need a coffee but adrenaline took care of it for me.  I met up with my team and we scouted the center, and went through some last minute revision of our job.  I was honestly very worried about making a mistake and costing the loss of a political seat.

My center happened to be in a university so our saluran  was in a dewan.  I entered and the seat closest to the three kerani (clerks) was already taken up by the PAS PACA.  So I sat in the middle seat while the BN PACA took the last one.

The PACAs’ job is to observe the entire process and make sure everything is done as per the law.  So we had to observe the three clerks – make sure Kerani 1 read out the IC number and name of each voter as they came in and crossed it off the electoral roll, make sure the person fits his identity – had to do some racial and age profiling here.

Then we watched as Kerani 2 dipped the voter’s finger in indelible ink and made sure the ink was visible and not wiped off.

Third, we observed Kerani 3 stamp the ballot paper, fold it and tear it off.  Kerani 3 is not supposed to have writing utensils so we watched for that too.

This is not an exhaustive list or else I’d have to publish the whole manual book here but it was roughly what we did.  My saluran was aged 40-60 years, and there was a neverending line of middle aged people.  I was basically on high alert continuously as voters streamed in, focusing on every step of the voting process, while at the same time crossing off their names and counting the number of voters to make sure it would tally at the end. 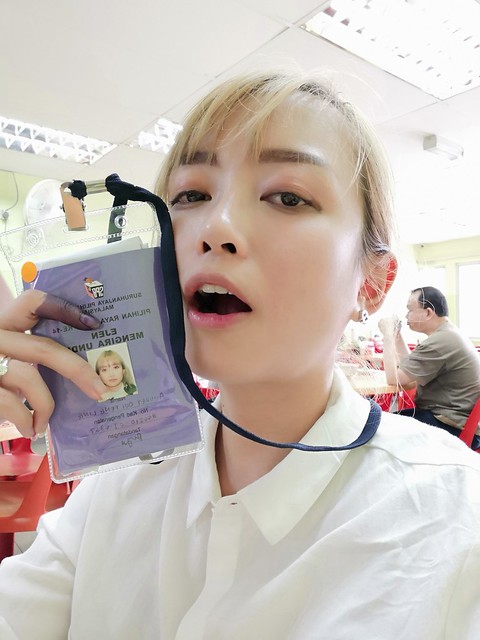 After my morning shift, it was time for myself to vote! I drove back to my parents’ house and picked Ooib up cos we were voting at the same center – our old high school. 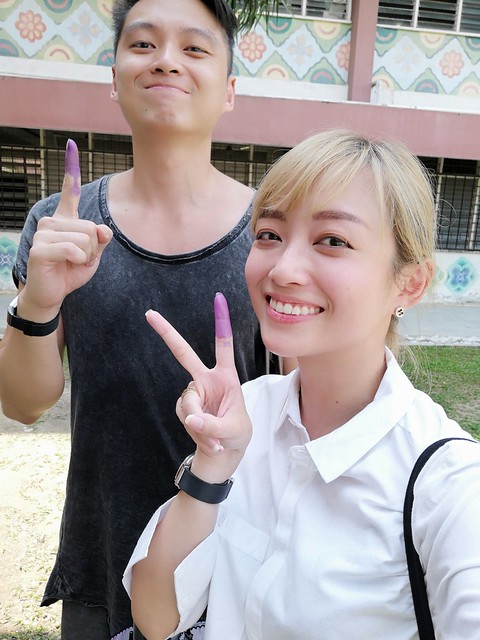 Done! Fingers before it turned a corpse like black wtf.

Went for lunch with Ooib and Sherlyn then headed back to my PACA center to prepare for my next shift, at 3 pm. 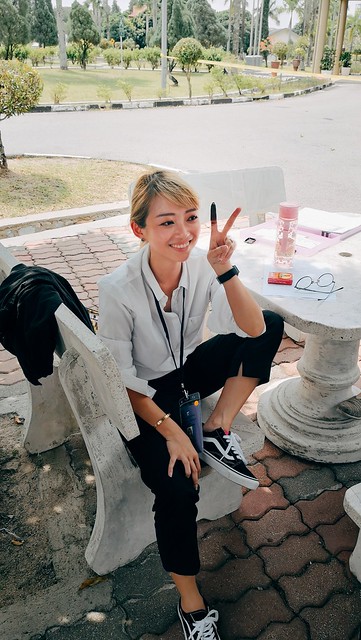 See finger black already.  This was the outfit I’d chosen for my PACA role lol.  I thought we would be in a regular classroom instead of a air conditioned hall so I chose to wear something covered up and comfortable, yet not too casual or hot.  End up I froze in the damn dewan cos it was so cold!  I borrowed friends’ jacket and wool scarf and wrapped myself up in a cocoon also cold.  I was so cold the markings I made when we were counting votes also crooked hahaha.

There was a lot less people coming in after 3 pm so I had the chance to take a breather and look around.  My KTM (Presiding Officer) confessed it was his first time too so he kept flipping through his KTM manual hahaha.  The BN PACA looked slightly intimidating, but my PAS counterpart turned out to be a very friendly mother of two who was also inexperienced, so we ended up helping each other quite a lot. ^^

I don’t think the KTM liked me too much though, cos I was super kan cheong about everything.  The most important form is Borang 14 but there were other forms as well and I was very worked up about getting everything right.  I went and reminded the KTM about the forms so many times I think he wanted to punch me hahaha.  Luckily I had the PAS PACA and her colleague to help (for some unknown reason, both PAS PACAs had authorization to count), and the colleague was experienced.  The KTM seemed to feel more comfortable talking to the experienced PACA (maybe chauvinism a bit) but he helped me a lot so I’m not complaining.

Counting was actually pretty straightforward and not the ball-cringer I expected it to be.  Sometimes they count the Parliament and State seats simultaneously but for my saluran, they did it consecutively thank goodness.  I kiasu-ly pulled a desk and chair up right in front of Maria’s ballot box, wrapped my blanket tighter around myself, and we got started.

All the PACAs were counting as the votes were being read out and it was clear from the start that Maria would sweep the votes.  Same went for the DUN, Dr Shaharuddin Baharuddin.  Every time the clerk read out “PKR”, she’d inadvertently glance at me and I felt like I needed to give her a response.  So I’d give her a tiny smile or nod every time, before jotting a mark on my sheet.  Since the other PACAs had less votes and less marks to make, I’m sure I looked smug and deserving of a face punch.

Both PKR candidates won by a landslide.  There was some minor conflict when the KTM told us he wouldn’t be signing our own copies of Borang 14, but we could take a photo of his.  I hurriedly whatsapped my team who promptly sent me screenshots of election laws stating that all counting agents must have their own copy of the Borang 14, signed by the KTM and all the other CAs. Following meekly behind the PAS PACA, we showed the KTM the laws and he relented. Yay!

By the time we finished calculating, making sure the numbers added up, signed off the forms, and watched as the clerks sealed the ballot boxes, then signed the boxes again, it was 9.30 pm when I left the hall.  The other two salurans weren’t even done yet!

At that point, I was so cold my nails were blue, hungry cos I hadn’t eaten anything except a pastry my PACA head passed me, and my brain was fried.  But as I walked out of that hall, brandishing my signed Form 14, Oy Sim who was waiting for me asked me how it went.  I told her I’d do it all over again.  Whatever happened from then on, we had done our best.  At least for Seri Setia, Saluran 2, I know no hanky panky went down on election day. 🙂

P/S: When I told Oy Sim I would do it again next election, she said ok they’d send me to Sarawak. LOL.