The title is self explanatory but our house was burgled recently! And yea, I didn’t know it until a day later. O_O

On Friday night, Fatty and I went for dinner and a movie.  We got home right before the clock struck midnight.  As usual, I went to check on both kids whose rooms are downstairs.  Both of them sleeping peacefully.  Then I took my laptop from the dining room table and headed upstairs to our room.

Right in the middle of my bed, I saw this.

My handbag was sitting in the middle of my bed.  I haven’t used this bag for a year or two and it’s always been sitting on a shelf in my closet.  I was out most of the day and when I was at home, I was downstairs with the kids mostly.  I remember going upstairs briefly though before I left the house for dinner, around 7.30 pm.  I was meeting Fatty for dinner and went up to get some eye drops for him from a drawer in our dressing area.  I probably went straight in and turned on the light in the closet instead of our bedroom.  So I didn’t see if the bag was already there before I went for dinner.

I picked it up and inspected the inside. Nothing but a dust bag.

3TFeeling slightly weird, I headed to our dressing area.  Two days before I had received a huge box of goodies from Shiseido, and I knew those were sitting in a tray on my dressing table.  My parents had also come over that day and my mom had passed me a stack of angpaus from her relatives over CNY which she had forgotten about.  I remember seeing that morning that our helper Dada had placed the angpaus in the tray together with the Shiseido stuff.

Now the stack of angpaus was missing.

I also had another angpau filled with petty cash that was on my table.  The angpau packet was still there, but it was empty.

I noticed a few other things.  Another one of my handbags on my shelf, I remember leaving a RM50 note in it for emergencies.  The money was missing.  There was a stray ring on the floor, next to my wardrobe.  The ring was costume jewelry, but I kept it in an acrylic accessories drawer next to my dressing table.  It looked like someone had ransacked my accessories drawer and the ring had flown out, but when I checked my jewelry, nothing was missing.

And the worst thing of all.  I kept a little velvet pouch in my makeup drawer that contained a gold bangle that my mom had given me when I got married. T_____T It has a lot of meaning to me cos my mom had the exact same bangle but bigger, when I was growing up and I always associated it with my mom, femininity and elegance.  And when I got married, Mummy Ooi got it for me. T3T  In the pouch was also a gold screwdriver that I used to tighten the screws on another bangle I wear.  Both were gone.

At first I was confused, thinking that maybe I had taken out the pouch by myself and forgotten.  I couldn’t believe that my bangle would be taken and felt like it should still be in my drawer.  Nothing else was amiss, and the kids and our helpers were sleeping peacefully.

Was it our helpers!?  I opened my CCTV app on my phone and started to watch through the whole day – hours of footage. O_O  The thought that it could be my helpers was intensely troubling considering that we treated them like friends and family; they had worked with us for years and I trusted them completely.  The CCTV footage didn’t show anything out of the ordinary, but who else could it be? And why would they leave my bag on my bed when it was so suspicious?  Did one of them want to frame the other or something!? I ended up sleeping at 3 am cos I was struggling with all these questions . T3T

The next morning, I gathered my courage, and managed to ask nonchalantly enough, “Dada, did you see the stack of angpaus on my table?”

Dada’s response was genuine surprise and confusion. She said she had placed the angpaus together with my Shiseido haul and I knew she did.  If she was planning to steal, why would she place it there only to take it later?  Dada quickly called Gaston, who stared at me in dismay. “I heard footsteps upstairs at about 11 pm,” she said.

I waved my hand dismissively. “That was just us walking around. We were back by then.”

Fatty who was listening, suddenly looked up. “Come to think of it, I noticed our window was open when we got home.”

We rushed back upstairs to check the window, and sure enough we saw…

The lock on our window was loose, as though it had been pried loose.  And there was the faintest mud mark on the window sill.

So it was a burglar after all!  He was probably rifling through my handbag and had to leave in a hurry, thus leaving my bag plonk on my bed.

My first reaction was RELIEF!  I was just so happy that it wasn’t Dada or Gaston!!!  Not just the legal aspect of it – having to file a report, fire them, etc but for years they had taken care of my family, and we also took care of them and their families.  We’d lived together for years and they’re really part of our family too.  Their betrayal would have been too painful to bear.

I was also relieved cos although the burglar came in, they clearly didn’t exit our bedroom nor did they hurt the kids or the helpers.  Plus just that day, we had our safe (which was malfunctioning) opened by a locksmith and Gaston had placed the contents of it into a paper bag in our guest room, and it was intact.  The burglar(s) probably didn’t even leave our room so they didn’t see it.  I was relieved and grateful for that.

Our loss of cash was a few hundred ringgit la, and the bangle which is worth a few thousand at least. They didn’t even take our laptops or Fatty’s watch which were laying about the room.  Those would have been a bitch to replace. Maybe they only wanted small items that were easily carried.  Only sad thing is the wedding bangle really, and the fact that I gotta use my thumbnail to screw my love bangle now hahahaha. 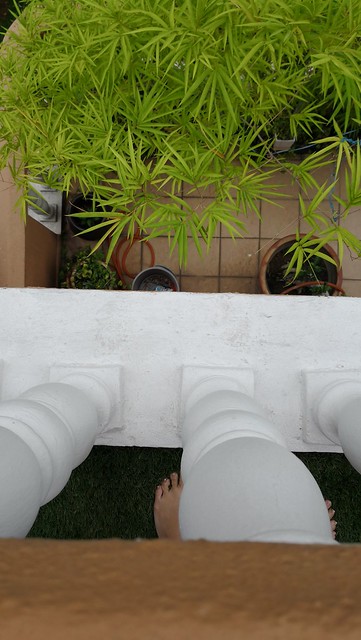 Checked our balcony to see how the fella could have climbed up, although we live on the third and highest floor.  See the two faint footprints on the white?  They’re probably his.

Later, we found out that our neighbor who lived directly under us also had his house burgled.  To add insult to injury, they drank his milk from his fridge and rudely left the half finished milk in his bedroom LOL. 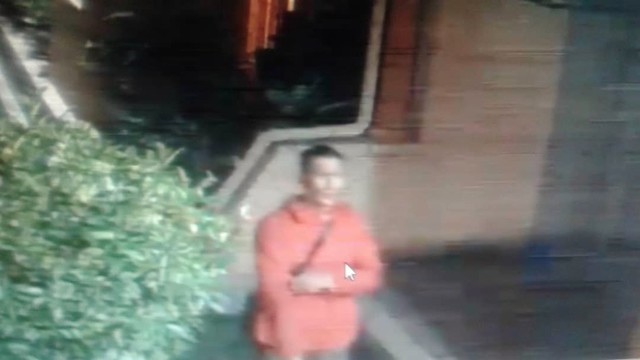 For some reason, the burglar also stole his wife’s red jacket and his Hush Puppies sling bag, which he’s wearing here LOLOL.

And yes, that is condo CCTV footage.  Our security guards managed to apprehend the guy actually!  When he returned a few nights later. O_O  Damn daring aih.  They handed him over to the police. 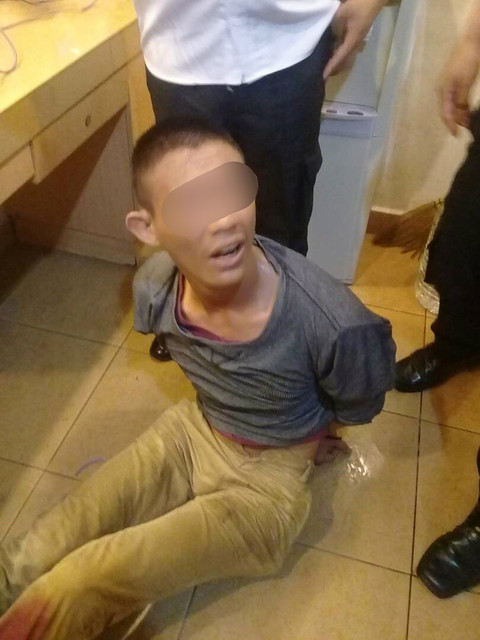 And then a few days later, they caught his accomplice, also trying to climb over the fence. D:

Again I was relieved.  I was worrying that the burglars would try to break in again, since they already knew our house and probably its weak points, so it was good to know they wouldn’t be trying it again.  But on the other hand, I felt sorry for them too.  They are just petty burglars.  I’m not saying they weren’t breaking the law, but …. what was their situation that they turned to petty crime and they got caught like that? :/  Nobody wants to resort to a life of crime to get by, do they?  Not unless they’re our former Prime Minister la and even then he wasn’t just exactly getting by. *side eye*

But then.  I am changing our locks.