How to make a homeless care kit

When Fighter was quarantined with the flu a few weeks back, I kept Penny at home too just in case she’d actually caught it too.  At some point, Fighter was better already and Penny was perfectly fine so I had two preschoolers going slightly stir crazy at home.  I started googling for indoor activities, thinking we could do some arts and crafts at home.

I came across this idea called “homeless care packages”.

They’re basically little packages filled with items that would be very useful to a person living on the streets.  We live in the city, so very often we see homeless people sleeping around our neighborhood.  The critters have also noticed them and asked us about them so I thought this would be a great project that we could do together.

Before we had kids, Fatty and I used to occasionally volunteer at a soup kitchen in KL.  I blogged about it HERE.  The soup kitchen would organize trips with volunteers, usually at night.  Donors would supply foodstuff like packets of rice or noodles, some fruits, snacks and water and we would travel around the city and disperse them.  We stopped when the kids were born – I guess too busy with midnight feeds and I forgot about it also.  Recently I thought of rejoining these trips but then I also heard that they’re doing very well and packed with volunteers!  So this is also the perfect way to do something else to help! 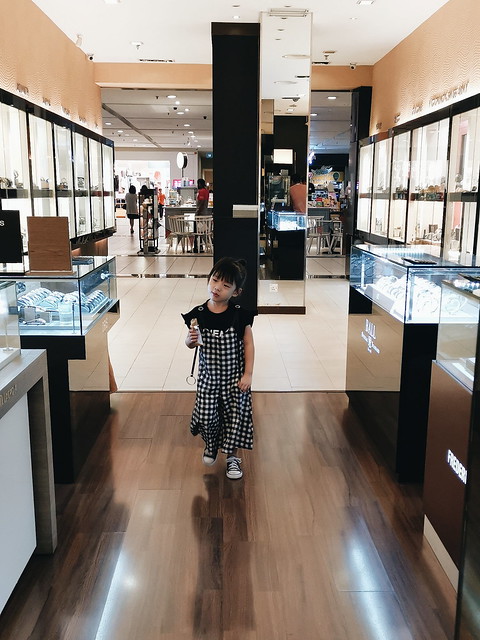 I told the kids about my idea and asked if they wanted to help.  Fighter immediately said he wanted to but Penny frowned and said, “No. I want to do arts and crafts.”

Me: “We can do arts and crafts too!  We won’t do homeless kits today anyway cos we still need to go out and get some supplies.  You want to help me and Koko?”

Penny: “No! I wanna do arts and crafts!”

Me: “But listen Baby. Don’t you want to help people who are poor?  They have a very tough time cos they don’t have a house or anyone to take care of them.’

Me: “Next time if Mommy and Daddy are not around and lots of bad things happen and you have no one to take care of you and no house to live in, wouldn’t you like someone to help you like we can help these people now?”

At this point I had a feeling she was just saying no cos she knew I wanted her to say yes. -_-

Me: “Fine.  You can play your own things and Koko and I will make the homeless kits.”

Penny: “Okay.  But Mommy can you help me open this box (of Playdoh)?”

Me: “No. Do it yourself.  Since you don’t want to help other people, don’t expect people to help you.”  My words were pretty mean, but I was super shocked and angry with her.  I don’t know when kids get better at thinking about others – is four too young?  But I remember Fighter at four was already very aware of people’s feelings.  I was angry with her not for lacking compassion, but for being so stubborn and for refusing to even help me when I asked.

I made as if to leave the room to join Koko in his room.

Penny cried and ran after me.

There followed half an hour of sobbing as she tried to get her emotions under control.  When she finally calmed down enough, I hugged her and asked, “Who takes care of you, Baby?”

Penny: “Because you want me to be safe.” Wah where did this come from why so self aware one lolol.

Me: “Yes but we also do it because we love you and want you to be okay.  Some people in the world have nobody to take care of them.  They have no money and no home and it’s very hard for them to be outside and feeling unsafe and hungry all the time.  It’s so tiring for them but it’s so easy for us to do something small to help them.”

Me: “Not as bad as them.  If you’re tired you can always go to your bed and rest.  They don’t even have beds.  Where are they going to sleep if they’re tired?”

Me: “We might be tired doing some work, but we are still better than them.  Next time if Mommy and Dada are not around, I hope there are people who will also help you if you need help.  That’s what we are doing now, just helping people who are more poor thing than us. Do you want to help Mommy help poor people?”

Honestly I still don’t know if she really understood what I was trying to say or she was just trying to please me wtf.  But I think at least some of it got into her head cos the next time she saw my parents, she asked my mom, “Grandma, are you poor?”

Penny: “Oh ok do you need any help?  Mommy said we must help poor people.”

I googled for what we could include in our care kits and compiled what I thought would work best for our climate and environment.  Then I went out and bought the supplies.  All in all, they cost me around RM 100 for twelve kits. 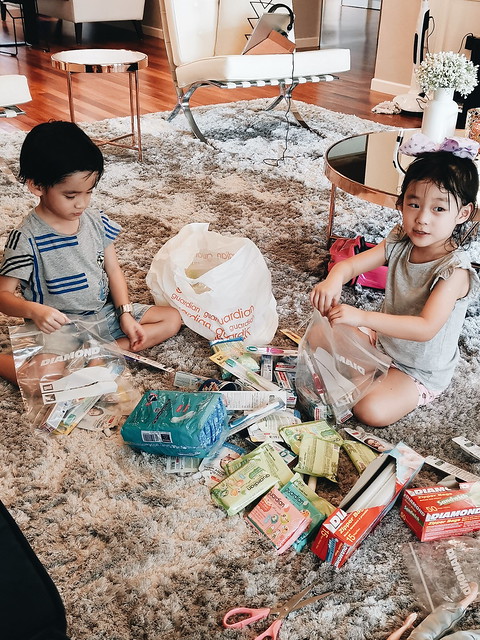 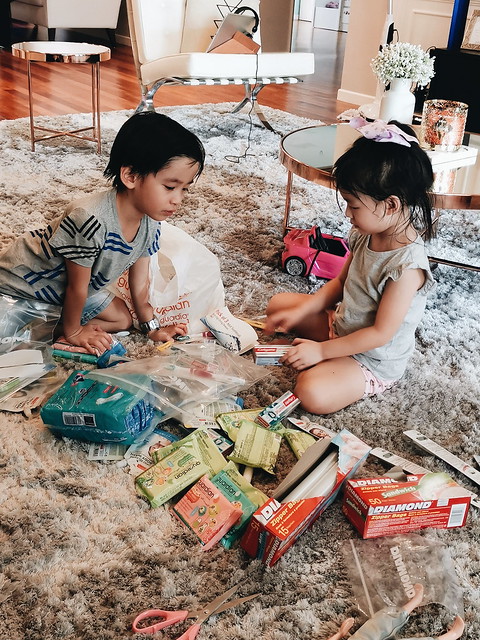 They did everything themselves with minimal supervision!  Unwrapping the packages, putting things into bags and counting and making sure they check off everything and put one of each into each bag… 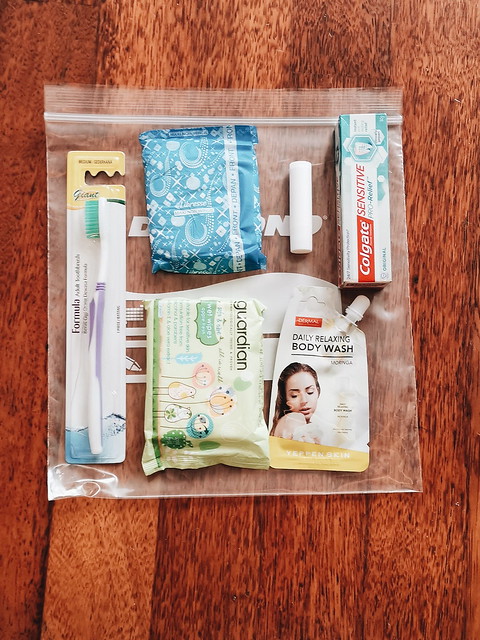 This is one of our care kits.  I used ziploc bags (not the most environmentally friendly option) but waterproof and reusable and pretty useful in general.  We put in toothbrush, toothpaste, sanitary pad (very useful for women), wet wipes, a little packet of body wash.  The small white tube is lip balm which we made ourselves at home!  Cos I found drugstore lip balms very not worth it – around RM 15 each?  I went out and bought my own lip balm cases, beeswax, coconut oil, and shea butter.  I think total cost less than RM 15 per piece lo for sure and I made enough extra for the kids to use too.

I also added a packet of biscuits.  Other options of food could be granola bars since they’re supposed to be high energy or high protein or something right hahaha but seems quite ang moh and elite I don’t know if the average person here can appreciate it hahaha. 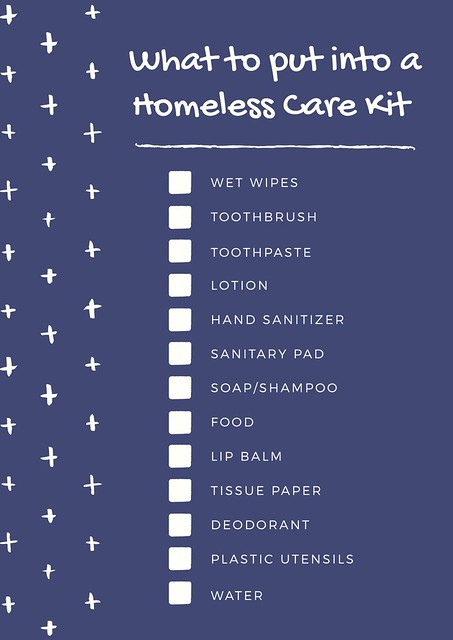 Here’s a list I made of things you could potentially put in too if you’re thinking of doing this!  Most of the items are sanitary products or toiletries cos I imagine if people had spare cash, they’d probably spend it on food.  Hygiene products are probably not high on their shopping list but goes a long way to making someone feel more “human” I think.  I mean I know *I* feel better after a good shower or brushing my teeth lol.  Plus I think if someone living on the street is trying to look for a job in the meantime, it would be so good for them to get presentable.

Our next batch I think I will also add in tissue paper, a plastic fork or spoon, and a bottle of water if it fits. 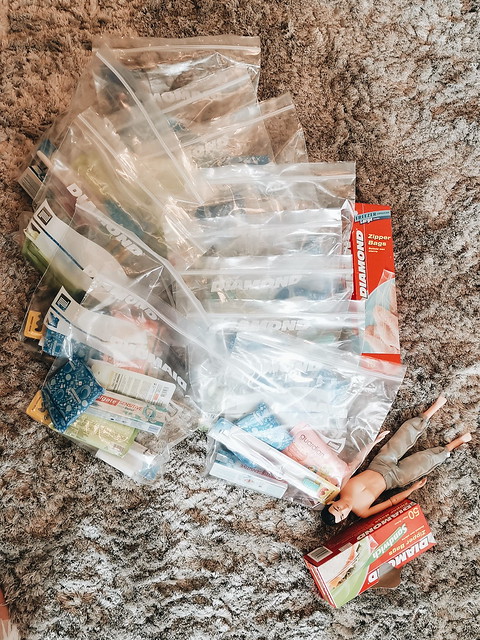 The critters ended up really excited and happy to make these kits!  Big change from that day my big fight with Penny wtf.  We made about twelve of these and I planned to keep them in my car so if we’re driving around and happen to see anyone who needs it, we can just hand them one.

So remember I said we see a lot of homeless people around our house?  The other day we were on the way back from our condo pool when we saw a man sleeping at the bus stop outside our condo. 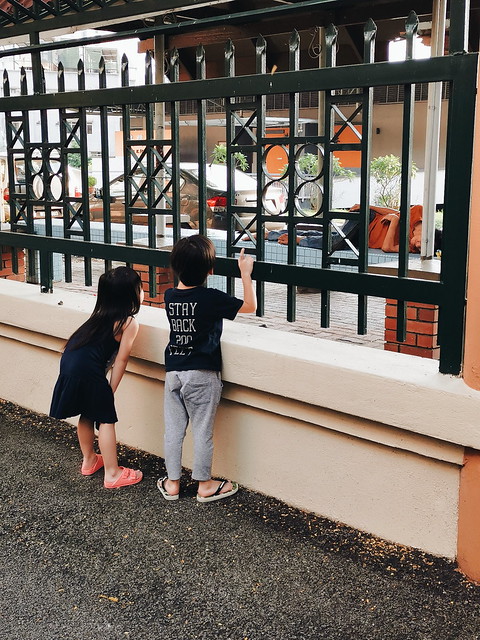 So when we got home, we grabbed one of our kits, plus a spare package of biscuits, and the kids put both next to the sleeping man.  He didn’t stir or budge.  At night Fatty and I took a walk outside and we saw the man still sleeping there. O_O The care kit had fallen to the ground but he was still sleeping. 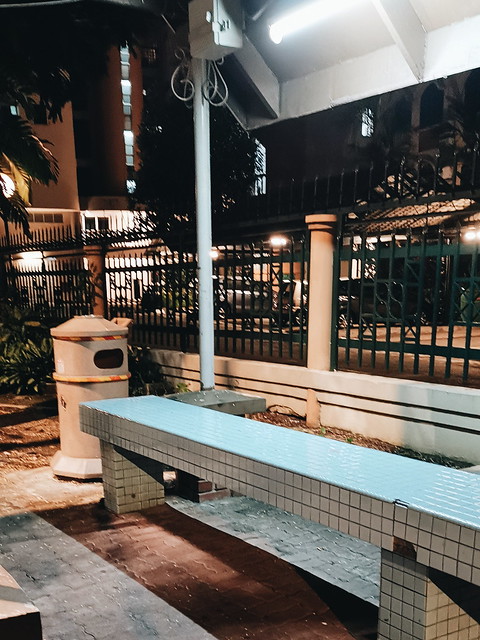 But later on, when we walked back, he’d disappeared along with the biscuits and the care kit. I hope he took them with him and found them useful. 🙂

Showed the kids this pic and they worriedly asked, “What if he finishes using the toothpaste?” lololol then we give him again la wtf.

In my last post, I wrote about the importance of empathy.   I think this project is a good start to getting kids involved and not just talking to them about it. ^^