Revelations from my mother

I have a whole blog category dedicated to my dad, “Funny Fat Her Stories” just because there are so many hilarious anecdotes attributed to Fat Her Ooi.

But today I want to tell my mother’s story.

Growing up, my dad was the fun one.  The one who arranged trips to Novel House (a book rental store in SS2 in the 90s), made up amazing bedtime stories featuring two iconic characters called Backside Boy and Backside Girl and lots of poop, was always joking and making us laugh, buying us books and magazines when we outgrew toys, embarrassing us by hugging and kissing us all the time, even in front of my friends, and the one to “pujuk” my mother when she got angry.

My mother on the hand, was the cool, practical, serious one.  The original superwoman.  She single handedly cooked, cleaned and ran the household, while simultaneously, chauffering us to and fro from school and tuition classes and activities, and kept us on top of our schoolwork. I remember my dad referring to her as “MacGyver” too lol because she even fixed appliances and whatever went wrong in our house.  She was capable, productive and no nonsense.  We were terrified of her.

Okay I can’t really speak for my brother but *I* was.

I was always afraid of getting on her nerves, treading on thin ice around my mother.  I also found her fussy and focusing on details that never seemed important to me.  So what if my bed wasn’t made I’m going to mess it up again at night what wtf.

Looking back, my mom was just a more perfectionist, neater kind of person, while the rest of us were tornadoes leaving a trail of destruction through the house, which must have really frustrated her.  I’m not surprised if she was grumpy or irritable because she was tired from trying to keep the house tidy and all of us clothed, fed, and in line (including my dad LOL).

As a child and teen, my mother in my mind was a scary dragon, but as I grew up, our relationship gradually evolved.  Nowadays whenever we’re visiting in my parents’ place, most of the time I’m in the kitchen verbally diarrhea-ing and updating her with every detail of my life (and my friends’ lives hahahaha).  I love my dad equally of course, but now it’s my mom that I naturally share all the little bits of my life with.

I tell people that my mom mellowed as she grew older, that she used to be much fiercer.  Maybe it’s true that she mellowed with age, but maybe it’s also her role change in life.  Maybe there is less pressure involved in being grandmother and not a mother 100% responsible for her babies; she doesn’t have to raise and feed children anymore, just play with them on weekends.

Or maybe it’s me and the fact that I’m a mother now.  I realize as a mama myself now how both my parents adapted so skillfully to whatever life stage Barry and I were at – knowing when to hold on to us and when to let go.  Maybe I’ve changed as a mother, and that has altered how I view my own mom. 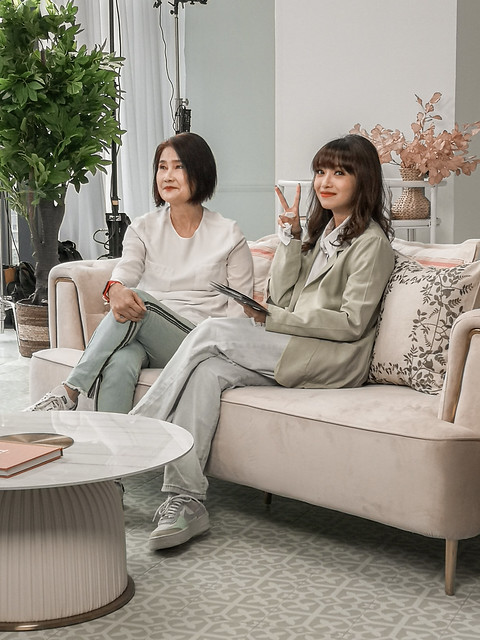 Last week, Mummy Ooi and I did a video shoot for The History of Whoo, a gorgeously packaged beauty brand from Korea with a very interesting name hahaha, in conjunction with Mother’s Day. You can watch it below.

The angle of it was that I would basically “interview” my own mother, with what I initially thought were pretty generic questions provided by The History of Whoo – favorite part about being a mom, funniest bit, biggest sacrifice etc.  What I didn’t expect was Mummy Ooi’s answers.  Isn’t that crazy?  I thought as a mom now I understood her but really, do children ever really know their parents?  Will Fighter and Penny really know me for me and not as just their mother?

Her answers made me realize how much I did not know — and how little I understand her.  And they made me love her even more.

I wanted to write them down here and preserve them forever wtf because those bits of info are so precious to me. T____T

On one of her hardest times

It was the day she had to leave me at Mount Holyoke.  I had never been away from home even one day in my life, but when I was 19, I packed up and my parents and I flew to the US for me to start my new life as a freshman in college.  International students were required to get there earlier so we would have more time to acclimatize (and get used to the time difference I presume).  My parents and I spent a few pleasant days unpacking my things in my dorm room, and exploring the campus and the surrounding town together.

The night before they were due to fly home, we had dinner and they dropped me off at my dorm room.  I remember feeling a little sad and homesick that they were leaving.  When the door shut between us, I burst into tears like a dam had bust open.  I threw myself on my single bed and sobbed and sobbed, unaware that back in her hotel room my mom was also crying at being separated from me.

This was such a revelation then and now.  Back then, I didn’t expect my own reaction — I loved my parents sure, but I was so excited to start an independent new phase of life as a college student; I hadn’t expected the sense of loss I would feel when the door closed.  And I would definitely not have guessed that my mom — the woman who scolded me every day, nagged at me to study, disapproved of my clothes etc — would be weeping a few km away too.

On one of her biggest challenges as a mother

When I was very young, my parents moved down to KL for work.  I stayed behind in Penang with my brother and grandparents and went to kindergarten in Penang.  Both sets of grandparents not to mention my parents’ siblings were all there so I guess it was easier to leave us there in their care while they went to work.  This was what I knew.

My mom revealed that my parents were in their late 20s when they left for KL for better opportunities and money.  They suffered financial problems and couldn’t afford to hire a helper to take care of me.  And my mom did not want to send me to a daycare or babysitter because she’d heard horror stories of babysitters abusing their charges.

Thirty years ago, people worked 5.5 day work weeks.  Saturday was a half day’s work so for the love of their children, every Saturday after work, my parents would board a bus or train and make their way down to Penang to see us.  This was before the construction of the North South Highway so it took like 6-8 hours one way?  They would arrive around midnight on Saturday, or the early hours of Sunday.

Then they would spend mere hours with me and my brother, before taking another bus back to KL on Sunday evening. T______T

I. did. not. know. this.  I mean I did, but I never properly considered what a burden my parents shouldered, balancing earning a better future for the family and not being present to care for us and watch us grow.

I have a memory from when I was four and my parents were again leaving for the station.  I was so upset at their departure but at the same time, I was a sensitive child and I knew that if they knew I was sad, they would feel even worse.  I remember running to the back of my grandma’s colonial shop house so they wouldn’t see me cry.

Eventually when I was 5-6, my brother and I moved to KL to live with my parents ok so all is good. ^^

On her sacrifice for motherhood

The initial years of marriage and parenthood were financially tough on my parents.  But as years passed, they worked hard and managed to creep up the ladder.  My mom trained as a secretary, going to secretary school to learn typing and shorthand.  She must have done well and been promoted because she started working in Ogilvy & Mather as an advertising exec.  (Coincidentally, in my own career in media, I worked with Ogilvy too as a sister agency hahaha).

When I was seven years old, I caught sick and was hospitalized with bronchitis.  I was generally a weak kid with asthma wtf.

I recovered, but I am that annoying kiasu kid you’d hate lol.  I got very stressed out because I’d missed so much school and I didn’t know how to do the work wtf hahahaha. I couldn’t accept cos I had always been a top achiever lolll.  I have a memory of myself crying on the staircase at home wishing that my mom would take me out of school WTF.

My mom didn’t do that but she did resign from her job.  At that point, she told me, her career was on the ascend.  She was working in the PR department of the KLSE by then, and doing very well.  But she made the choice to give up her job, give up her career and be a stay home mom to look after me.

“Yes, it was very difficult because I was doing so well.  I was flying high and so proud of myself.  But at that point I asked myself: which is more important, my career or my daughter?  And the answer was always you,” she told me gently.

She went on to say that she had no regrets doing that because under her care, I was finally putting on weight (I was always skinny and sickly before).  And that you could have amazing helpers but there’s no replacement for a mother’s care and watchfulness.  And look at me, the me and Barry today is her success.

I really cry max lo T_________T  I would have sobbed out loud if not for the entire video crew staring at me wtf.

On her greatest achievement

She simply said, “the both of you.”  Me and my brother.  The best day for her was our graduation days.

She cried watching us walk up to get our diplomas (some more I walked the wrong way wtf).  Again, I didn’t know this cos she’s always so tough and practical.

Our successes today are her successes.  Her happiness is knowing that we’ve both turned out to be smart, book loving, thoughtful, filial adults.  And crazily, that we both make it a point to see them at least once every week. Because she said a lot of her friends live in the vicinity of their grown kids, but their kids don’t even see them as often.  Whaaaaat.  That’s the bare minimum to me wtf. 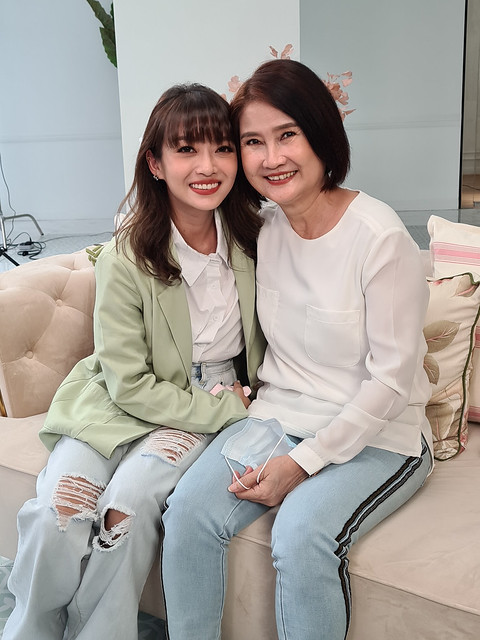 Not a mother who nagged and didn’t distribute hugs and jokes the way my dad did.  But a woman – a wife and mother – who loved so fiercely that sometimes it overwhelmed her bonds with her family.  Who was so protective of us and would fight for us, but was so soft and vulnerable inside that she created a hard shell for herself that as I didn’t know how to see through as a child.

Well now I do.  And I appreciate and love her more than ever. 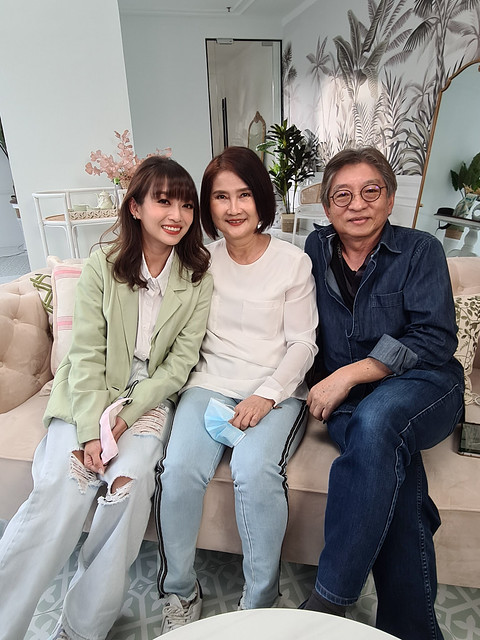