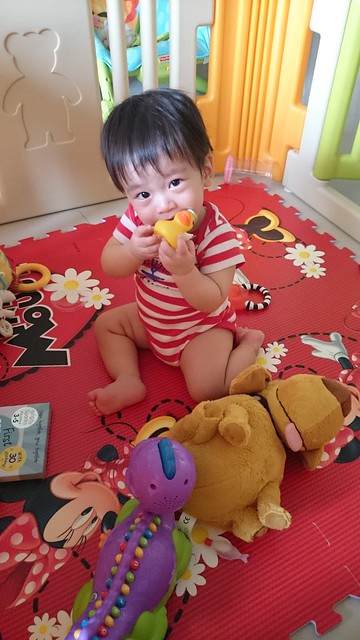 Took Fighter to get his MMR jab today!

Okay so this is a topic I’ve been fairly obsessed about (until some of my mom friends got a bit scared wtf).  And that topic is vaccines.

It all started some time ago when somebody left an online comment warning me about vaccinations and autism.

Backtrack a bit.  When Fighter was born I was so afraid something would be wrong with him, being born premature and all that.  Then when we did the tests one by one and everything proved fine, I still wasn’t convinced wtf.  I kept thinking we went through so much, what if we’re not that lucky and something shows up later on?

That something that I fixated on was autism cos autism is not immediately detectable at birth ma, not like Down Syndrome.  Plus before he was born I happened to read books about autism wtf.  I googled extensively about autism and for the past year I watched Fighter closely for symptoms or signs that he wasn’t progressing socially/mentally etc.

Thankfully he seems okay and is developing very well socially.  But cos I read so much about autism already it remained a vague fear in me.

So when people started ‘warning’ me about the link between autism and vaccines I obviously got worried and restarted my Google campaign to find out as much as I could about vaccines.

What I read pretty much put my mind at ease about getting Fighter vaccinated.

1. Andrew Wakefield (the guy whose research sparked off this vaccine autism scare)’s scientific paper has been retracted. His research has been found lacking in a bunch of ways and his medical license has been revoked.

2. Since then further studies have been run but none that have conclusive evidence that can link autism and vaccines.

3. Why people think autism is linked to vaccination is cos regressive autism happens around the same time kids get certain vaccine jabs… Hence they conclude that hey it must be the vaccines! But from what I’ve read, these evidence so far has only been anecdotal, not scientific so unless someone could point me to a study that hasn’t been discredited?

4. Some people thought the ingredient thimerosal in vaccines was to blame in causing the rise of autism. But thimerosal was phased out of vaccines, and the autism rate continues to rise. Source

5. Apparently the number of diagnosed autistic kids have increased recent years so anti vaccine advocates say it’s cos of the vaccines. But vaccines have been implemented for decades why now only increase??

It’s also possible that the increase can be attributed to growing awareness and better diagnostic skills. Plus in the past doctors didn’t considered high functioning high IQ kids to be autistic but now they do so that opens up a whole…range of factors to be considered.

If this was really due to vaccines, wouldn’t it have happened much earlier?

6. For every study I’ve read, there’s a well written article (if not a direct discreditation) refuting its findings. For example, take this study which supposedly found a link between aluminium (in vaccines) and autism rates. Frankly it scared me but then I did another search on it and unearthed this article which refutes quite reasonably that study was cherrypicking data and hence skewing its results.  Also that study was funded by an anti vaccination group. :X

Autism fears aside, these are some other fears that I see anti vaxxer parents cite often:

Vaccination is not immunization – I don’t really understand this argument. It may not be immunization because sometimes a kid’s body might not develop the antibodies but isn’t vaccination a right step in the direction anyway?

Better to contract the disease than get the vaccine – Some people believe it’s better to contract the disease, recover and then develop natural resistance to it. Yea but is polio or whooping cough something you really want to contract? What if you don’t recover? *touch wood* And do you really want to put your kid and family through this suffering, spend unnecessary money and heartache to avoid something that has been proven to save lives?

Vaccines can cause severe reactions in children – Never say never and I have read there have been cases of children developing severe allergies or reactions to vaccines. However these are extremely rare, and considering the benefits of vaccines I’d say they far outweigh the risks.

Which is why I have chosen to continue vaccinating Fighter.

I’m not here to change anybody’s mind because god knows I get annoyed enough when anti vaxxers come to me and try to make me worry and convince me otherwise. But it annoys me because all the reasons they give so far to me have defied logic and evidence. The studies cited are also frequently junk science, poorly conducted research and experiments or financed by anti vaccination parties.

Illogicality is what annoys me the most about this actually. But I’m open to new information, as long as it’s scientific. Any parents here with thoughts on this?