The story of the baby hater

So as you may have seen on me and Fatty’s Dayres, we had a very unpleasant encounter with an Australian man yesterday on our flight back from Sydney.

(yes we were in Sydney. For a week.  With a baby and a toddler.  This warrants a post of its own which will be coming up after this wtf.)

So it was the end of a very stressful and harrowing week for us.  At the check-in counter we had already checked in three suitcases but we still had a crapload of stuff with us – I had Penny strapped to me in a baby sling and I was pushing her stroller filled with the world’s heaviest diaper bag, water and snacks for Fighter and miscellaneous items that fell out of our suitcase wtf.  Oh and my backpack.  Fatty had his backpack and was carrying Fighter.  We were bogged down but we were at the finish line! All I wanted to do was climb onboard the plane and endure the last leg of our trip so we could go home and rest.

Stepped on board and located our seats.  It turned out I was on an aisle seat and Fatty was in the seat across the aisle from me. 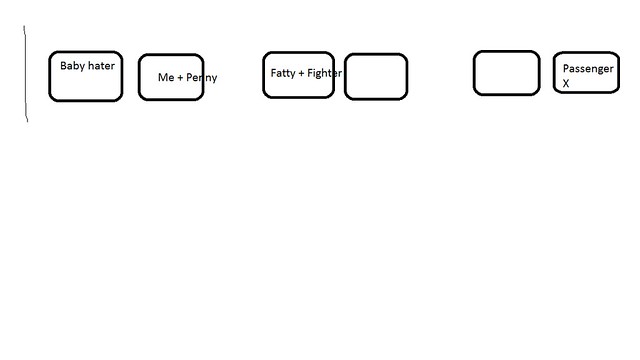 I drew a diagram for your reference.

Next to me by the window was a big Australian man, in his fifties.  He was talking on the phone when he saw me and said to his phone,

Oh god there’s a bloody baby next to me.

Fine I totally understand.  Nobody likes a crying baby on a plane and before having kids myself I was exactly the type of person whose head would whip around to locate the source and cock stare the poor kid and parents wtf.  So I get it that nobody wants a baby around on a flight cos of the high risk of high blood pressure and insomnia wtf.  In fact, I was considering buying candy to bribe my fellow passengers in case Penny or Fighter cried wtf.

Fatty and I settled into our seats and I noticed my neighbor going to talk to the flight attendants.  He was gesturing and I got that he was complaining about having to sit next to a baby.

He came back looking kind of dejected though so I assumed the crew probably told him he had to wait to see if there were any available seats or something.

I certainly didn’t want to make the poor guy suffer unnecessarily.  I noticed that there was nobody seated next to Fatty, so I said to him, “Excuse me, but don’t worry I’ll be moving to the other row to sit with my husband so you don’t need to bother about my baby.”

I don’t remember what he said exactly but something along the lines of how he has to transit from KL to London again and he’s damn tired and don’t want to put up with this yadda yadda. And then he said some other stuff in a grumbling tone which I kind of tuned out wtf.

I said, “Yes sure I understand.” But inside I was a bit miffed that I was doing him a favor and instead of saying thanks or sorry for the inconvenience, this man was just continuing to grumble about his misfortune of sitting next to me wtf.

Eh hello doing something nice for you leh need to keep harping on it??

Sadly for him, when I asked the crew if I could switch over and sit next to Fatty, they said cannot.  Because each row only comes with three oxygen masks and there wouldn’t be enough for all for us.  Which was why they seated us across the aisle from each other.

Too bad so sad for the baby hater.

I knew full well that Penny was going to cry at some point in the flight and started to feel quite uncomfortable sitting next to him.  So I asked Fatty to switch seats with me, figuring we had better chances with Fighter.

But noooo. Baby Hater’s eardrums too precious or something cos he then called over the head attendant and started haranguing him.

I couldn’t hear properly cos I was across the aisle by then but I pieced it together after it all.  According to Fatty who was sitting beside him, Baby Hater was complaining about how he’s some One World Emerald member or some nonsense like that, and was this how they treated special members?  By seating them next to a baby?

At this point, I saw Fatty’s eyes roll until can only see the whites wtf.

The head crew asked if he would like to switch seats away from the babies and he said NO. HE PAID FOR THIS SEAT (1A) AND BY GEORGE HE WAS GOING TO SIT IN HIS SEAT.

(Actually we didn’t la, my fare and the kids were redeemed from points hahahaha but he doesn’t know that wtf.  And anyway you don’t pay for a particular seat what shit is this.  You can request it but you don’t pay extra to sit in a particular place la please.)

Then Baby Hater gestured at Fatty and said, “WHY DON’T YOU ASK HIM TO MOVE INSTEAD.”

Head attendant told him that wasn’t possible (because the baby bassinets were in our row so no way we could move to the back).

This is when Fatty kaboomed.

He retorted, “I am to MAS whatever you are to your One World.  The fact is if you want to continue sitting here you’ll have to deal with it because both my kids are probably going to cry sometime in the flight.”

Baby Hater drew himself up and boomed, “Then maybe they belong in the back, in economy class, and you with them! My daughter is sitting in economy herself.”

Fatty lost his temper. “Well then it’s not my problem if you can’t afford to fly your daughter business class!”

Woah woah Baby Hater going to explode at this point. He hollered, “I COULD BUY UP THIS ENTIRE BUSINESS CLASS IF I WANTED TO. I JUST DON’T BELIEVE IN SPOILING CHILDREN. You’re one to talk – you didn’t even have to pay to bring your kids into business!”

Which is totally untrue and just goes to show how little he knows.  Infant fare is 10% of the adults and they don’t even get their own seat.  Noob.

Fatty obviously corrected him of his stupid notion but he ranted on and on.  About how Fatty started it cos he wasn’t even talking to him, he was speaking to the attendant.  Fatty was like are you kidding me? You kept pointing at me and trying to ask the crew to make ME move right in front of me, how is that not rude and involving me?

I also got angry and spoke up, “Yes and I was trying to help you out by requesting to change seats and you didn’t even have the courtesy to say thanks or be nice about it!”

I can’t remember what was said after that but he ranted on for a bit and demanded compensation from the crew which they respectfully denied.  How? Already offer him alternative seats he still don’t want.  What else can they do?  The argument kind of petered out with the head attendant patting Fatty on the hand to calm him down hahahaha.

I was boiling at the arrogance and selfishness of this asshole.  I was still thinking of things to say back to him when suddenly Fatty turned to him again and said, “Look. Let’s start over.  I apologize for saying you couldn’t afford tickets – that was uncalled for. My issue is that I would like to move if I could but I can’t because the baby bassinets are here and I have to sit with my wife to help her with the baby.  What is your issue?”

Baby Hater more or less calmed down and started speaking in a nicer tone.

But across the aisle I was fuming and indignant.  I wanted to go over and make Penny gnaw on his head or something wtf.  Later on, I asked Fatty WHY DID HE APOLOGIZE!?

Fatty said he felt that he was out of line making personal insults and implying he was poor wtf.  Besides the flight was eight hours and Fighter was bound to make noise at some point, and he didn’t want to deal with more shit from Baby Hater.

From his end, Baby Hater explained he was trying to make a fuss to get compensation, hoping they would switch his seat and upgrade his daughter. And he was surprised why Fatty jumped in cos he didn’t think it concerned Fatty.

Ummm then it just means he’s too cheap to pay for a business class ticket for his daughter and wants to get a free upgrade by yelling and ruining people’s day???

And guess what?  After Fatty apologized, Baby Hater never did.  No apology for inconveniencing us, no sorry for being rude, and definitely no apology for the crew who got yelled at for nothing.

In fact he confided in Fatty that in his experience, making a big enough fuss would get you what you want on flights WTF.

I feel sorry for whoever has to service him. 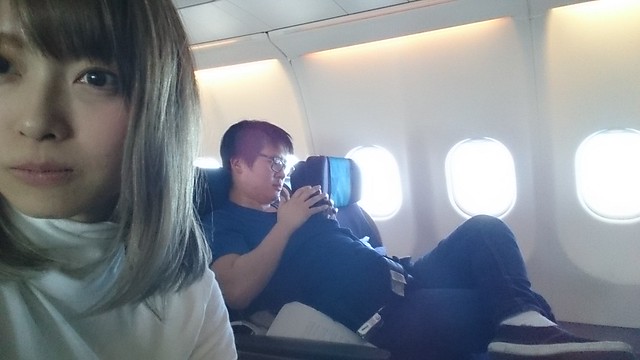 This was a picture I took later to show you guys our seat positions.  I’m on the aisle, and the window seat next to Fatty is Baby Hater. 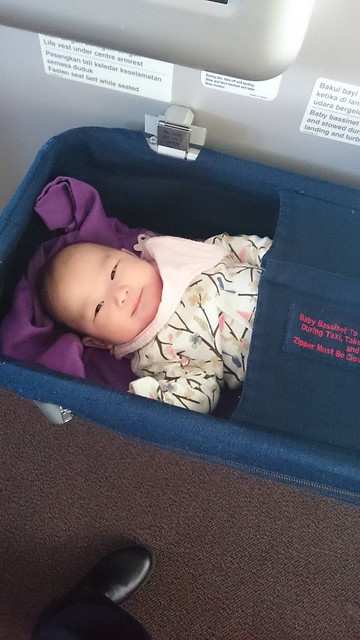 The happiest one of us hahaha in her bassinet. 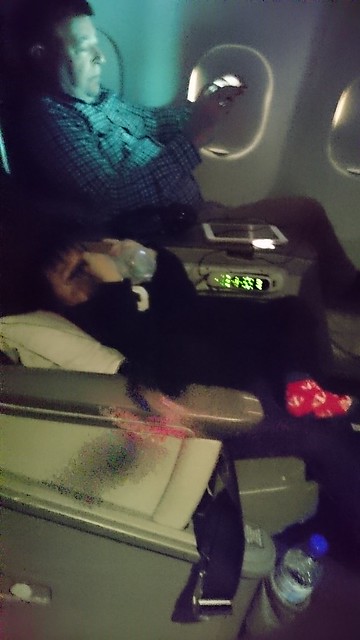 At one point Fatty asked if I thought he should move seats next to Passenger X so Baby Hater wouldn’t have more reason to hate babies.  I told him, if Fighter is going to annoy someone, shouldn’t it be someone unpleasant rather than someone who didn’t do anything?” Hahaha.

The lesson learned is this.  Nobody wants to listen to a crying kid in a confined space.  Heck, I hate it myself.  But what to do, kids on flights are a necessary evil.  Obviously I’ll do my best to make sure my kids are as undisruptive (is that a word?) as possible but we have every right to be on a plane, same like everyone else.

Also, making a fuss will get you nothing.  Except a whole blog post dedicated to you. Hahahaha.