I never thought I would say this.

In fact, I thought the only way I would ever is if I was at least forty years old with no other options wtf.

I have started working out.

In fact, a big reason why I chose to take on a Marie France package is because I didn’t WANT to exercise.  I’m willing to look for any other option as long as I don’t need to work out hahahahaha this is how much I hate exercising.

But my grandma’s death recently shook me up a bit.  By the end she was more or less bedridden because she’d had a few bad falls and her bones were so weak.  After she was cremated and my parents went to pick up her ashes, they told me her bones were apparently extremely jagged and porous cos of the osteoporosis.

I read somewhere that osteoporosis can be hereditary, and it occurs a lot among women of East Asian descent.  Which is me la!

Then I flashed back to my obgyn who kept telling me to make sure I drink 2-3 glasses of milk at least a day while breastfeeding and exercise to prevent osteoporosis later on.  I am drinking LOTS of milk but what good is that if the calcium isn’t deposited properly on my bones right!?

So yea I figured I’m already 30 this year so exercise sounds like a necessity now.

When I was preggers, I was envious of Bobo’s perky butt hahaha cos she was doing Kayla’s BBG routine.  I was feeling ungainly and ugly then and I consoled myself that I would start this BBG once I was done being pregnant.

I’ve not been pregnant for six months plus now so I guess I better get going wtf.

How has it been so far?

Well, I impulsively decided to just go for it and start, one fine day and I didn’t prepare any uhh… props? Tools? What do you call it wtf.  Oh workout equipment right?

Yea so anyway I jumped into it feet first without preparation.

Instead of a yoga mat, I used a bathmat. LOL.

On hindsight I should wear proper rubber shoes? Instead, I worked out barefoot on my bedroom carpet and got minor carpet burn WTF.

Halfway during the time sensitive workout, I realized I needed dumbbells or some sort of weights to lift.  So I used Fighter’s shampoo bottles WTF.

And then I also need a step to do step-ups.  There was a stool in the kids’ room but no way was I going in there and risk waking the sleeping dragons.  So… I stepped up on my toilet bowl. HAHAHAHA.

When I told Bobo what I did, she was horrified hahahahahaha she said please don’t cos it’s very high and dangerous wtf.  I said it’s ok what my toilet bowl is next to my towel rail so I could hold my towel for support hahahahaha.

After the first workout, I wanted to vomit WTF.  And I walked like a crab for two days after.

After the second workout, I had a headache which felt like a hangover WTF. 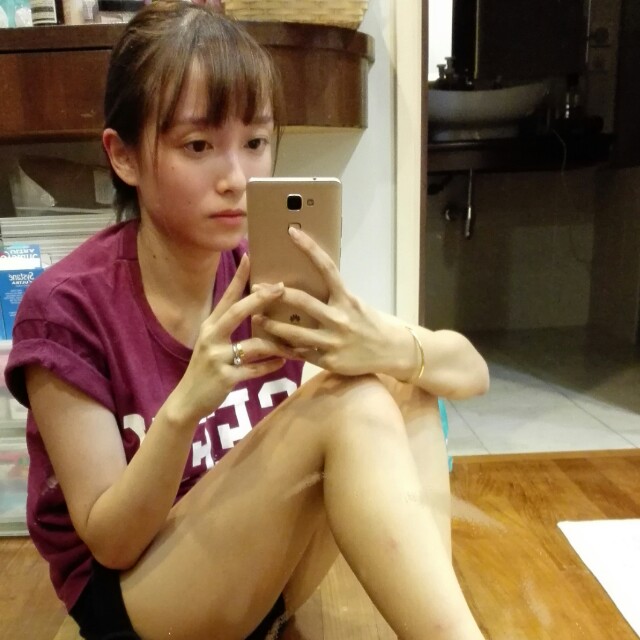 I’ve just finished the second week and honestly, every workout still feels like hell.  I keep checking the timer like a madwoman wtf, and I always regret halfway like why am I doing this!?!? My body not so bad to deserve this kind of torture what.  I think I can live with having a big waist and no ass la hahahahaha.

My abs still hurt like crazy so I can’t even laugh in peace now fml. Every workout session I question my sanity. And I don’t even know if I’m doing the exercises correctly.

For example, when I’m doing planks or push ups or commandos or whatever hellish thing, I presume my body should be straight as a er, plank right?  But my butt inches higher at every turn, and at one point I noticed it was swaying from side to side FML.  So who knows if it’s effective?

All I know is that it feels terrible. T____T Exercise is everything I feared and worse wtf.  People ask me how I feel after completing a session, expecting me to say I feel tired but great wtf.  That I feel a sense of achievement.  But #thetruthis, no lor hahaha.

I hate it hahaha. It feels like self torture and I feel like an idiot doing it because it’s so not in me to work out.  When lactic acid is shooting through my legs and my lungs are on fire, I hate the world.  And the only reason why I’m continuing is because I don’t want to have suffered the previous workout sessions for nothing.  It’s like a cult lol. So I continue…

(omg I don’t even have a blog category for this. So I’ll put it under AudAngry HAHAHA)