At the hospital waiting for the doctor cos Fighter’s fever came back. 😔

Times like this I wish I was still breastfeeding so I can do something more. 😢

His fever was at 38.6 C again this morning but now subsided after another dose of paracetamol. So he’s more or less back to his usual squirmy bossy self wtf.

I on the other hand diarrhea again wtf so I’m camping out in the toilet next door to the clinic. Fml.

Fml la been having diarrhea ever since we got here. Fatty’s fine so I have no idea what I ate?!!!

Anyway I’m camping in a Starbucks toilet now wtf. So scared I wouldn’t make it in time WTF sorry hahahaha. Luckily nobody asked me to buy a drink first cos I’d probably have thrown something at them. 😳

One spaghetti carbonara two nights ago resulted in diarrhea for two days wtf but only in the morning jeng jeng.

First was I was in the toilet having diarrhea wtf (chili pan mee for dinner) and a rat ran out from the shower drain WTF FML.

Oh I’m very good at diarrhea-ing wtf. I may have undiagnosed irritable bowel syndrome or something cos I get diarrhea very frequently. It’s usually not too bad do I just put up with it and don’t do anything.

I am not afraid to admit I have digestive issues wtf.  I’ve always been prone to diarrhea my entire life. (Think how bad I had it when I was in school and had to poop frequently in my government school toilet T_T) Sometimes it’s because I ate something spicy, or something dairy, or sometimes I just don’t even know what triggers it.

I’ve tried isolating my diet to see if it’s lactose intolerance or something specific but never could figure it out.  I probably have undiagnosed IBS la (Irritable Bowel Syndrome).

I’m very used to it so I don’t really do anything about my diarrhea; I normally just wait until it passes…. but not when it comes to traveling. T_____T I get diarrhea so often and so unpredictably, that the day before I travel I usually stick to clear, bland foods in case I lau sai next day on the plane/car/roadside wtf.

I remember when I was 12, my family was traveling around the US… and suddenly on the tour bus I really had to poop wtf.  My poor Fat Her had to run around trying to find a toilet before I lau sai on his shoes really FOL.

So the question is…. 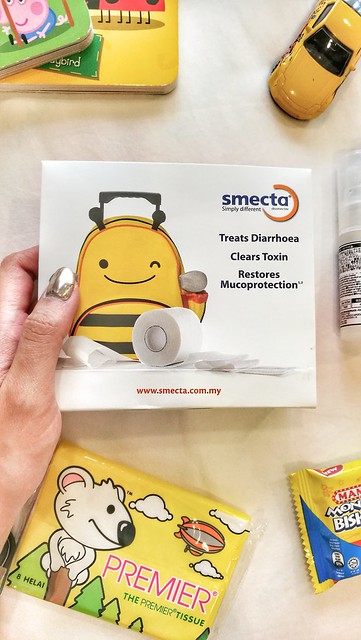 WHY HAS NOBODY TOLD ME ABOUT THIS BEFORE?

Smecta is the enemy of diarrhea wtf.  It’s a product of France which not only stops watery poo, it also treats diarrhea, which apparently is not something all anti-diarrhea meds does. 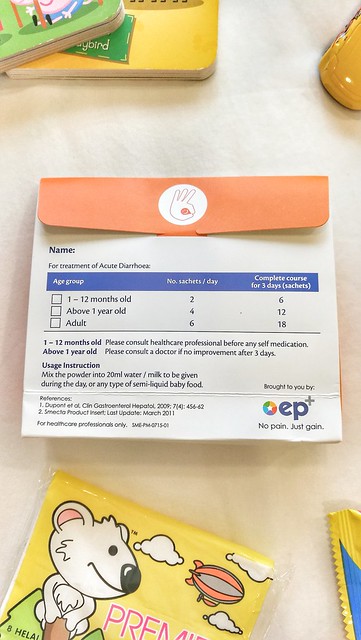 Smecta is actually a sort of clay that treats diarrhea and other gastro-intestinal discomforts.  Its unique structure is able to absorb the toxin and clear it from the system.  It also protects the intestinal mucosa layer so that nutrient absorption is less affected during diarrhea.

I got this for my kids to add to our first aid kit for when we travel cos… yep it’s suitable for babies and children.

For kids, you can give them up to 4 sachets a day for 3 days.  Although it should be fine for babies less than a year old, please consult a doctor first before starting the course.  Adults can take up to 6 sachets a day.

Just mix the sachet with water or milk and consume.   If you’re wondering about the taste, Smecta is known to have a slight muddy taste though (because of the clay) but it’s flavored orange-vanilla to mask it.  Penny and Fighter don’t have a problem drinking it. 🙂 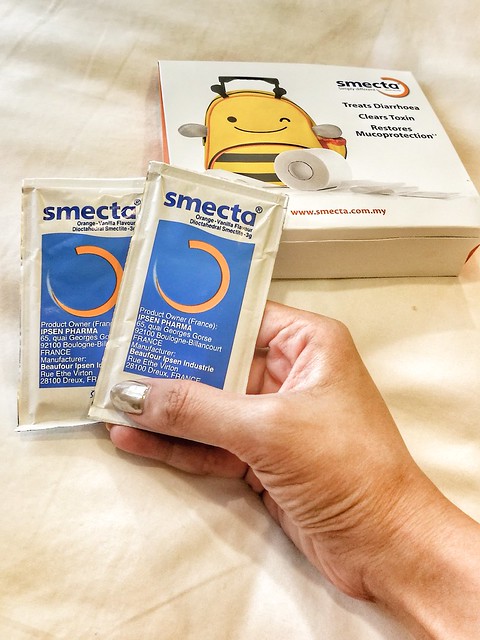 Smecta is sold by the box or the packet; I find the box a little too many packets at one go (30 packs) but buying pack by pack is just tiresome.  Solution is …you can ask your pharmacist to pack how many packets you want for you – Smecta produces a special dispensing bag for pharmacies for this! 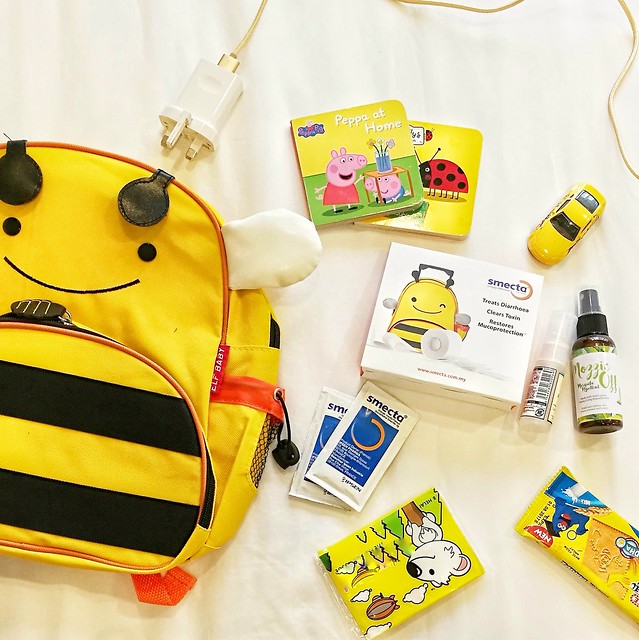 So this is what’s in my toddlers’ traveling bag. The bee traveling bag is actually a giveaway by Smecta via lucky draw if you take part in their survey *HERE*!

Anyway…. it’s phone charger (mine wtf in case no battery), toys and books for their entertainment, tissue and wet wipes, a snack, sanitizer and mosquito spray, and Smecta. (as well as stuff like paracetamol, thermometer, asthma inhaler, etc

Got the Smecta as a precaution for the kids… but I think Imma use it the most often FML hahahaha.